Due to the fires that broke out near the airport, the international airport of Catania has suspended the flight operations on arrival and departure. Musumeci: "Life imprisonment for arsonists" 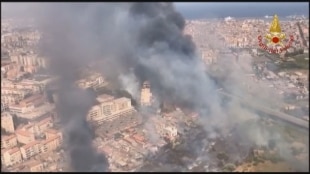 July 30, 2021Catania burns due to the heat and the suffocating African wind and the flames that fuel several fires. The most affected area is that in the Fossa Creta district where several families have been forced to leave their homes. An intense cloud of smoke rises in the area. The service axis is closed to traffic and access to some roads is also blocked. A fire destroyed the Le Capannine bathing establishment on the Plaia seafront. Numerous firefighters are engaged on various fronts. Reinforcements are coming to Catania from other main Sicilian commands.

Due to the fires that broke out near the airport, the international airport of Catania has suspended the flight operations on arrival and departure to allow the intervention of the fire brigade helicopters.

Sicily in flames with fires and outbreaks in a large part of the island. Fueled by the high temperatures and the hot wind - without excluding the hand of the arsonists - there are several fires recorded also between Palermo and Messina.

In Palermitano, in Piana degli Albanesi, about 800 hectares of wood have been devastated. Canadair in action and firefighters were deployed on the ground and by air. As a precaution, the firefighting teams evacuated some families who live near Monte Pizzuta and the Casalotto district. The mayor of Piana degli Albanesi, Rosario Petta, spoke of criminal action. Burns also in Altofonte.

In Messina, forestry corps helicopters and firefighters intervened in the hills above the hamlet of Camaro. A large fire, on at least 4-5 fronts, also affected the area of ​​Catarratti and the one near the Mito complex. And in the area of ​​the Bordonaro Village, south-west of the city of the Strait, hectares of countryside have been destroyed. In the last few hours, the operations room has received hundreds of phone calls from residents alarmed by the numerous outbreaks and the black smoke visible even from a distance.

For the cities of Catania, Messina and Palermo a "red" level 3 (maximum) alert was issued by the regional Civil Protection. Throughout Sicily, the Regional Department has issued the new bulletin with the status of "early warning" and "attention" for the risk of fires and heat waves, until 6 August.

"As we unfortunately feared, due to the very high temperatures that we have already been experiencing in Sicily since yesterday, the island is attacked by large fires, some of which are really serious due to the devastation that ensues. A situation made even more tragic by the renewal action of arsonists who, as ascertained by investigations by investigators, scientifically set fire in several places causing irreversible damage to the forest heritage and even putting the safety of people at risk. for wicked actions that erase the identity and history of our territory, as happened yesterday in Portella della Ginestra and Piana degli Albanesi ". This was stated in a note by the president of the Sicilian Region Nello Musumeci.