Doctors, who obtained the golden residency, stated that “the UAE is a country of appreciation and giving to everyone who lives on it,” stressing that “all government decisions take into account the resident and the citizen, and that they always succeed in turning crises into opportunities,” noting that their obtaining the golden residency is a dream. achieved 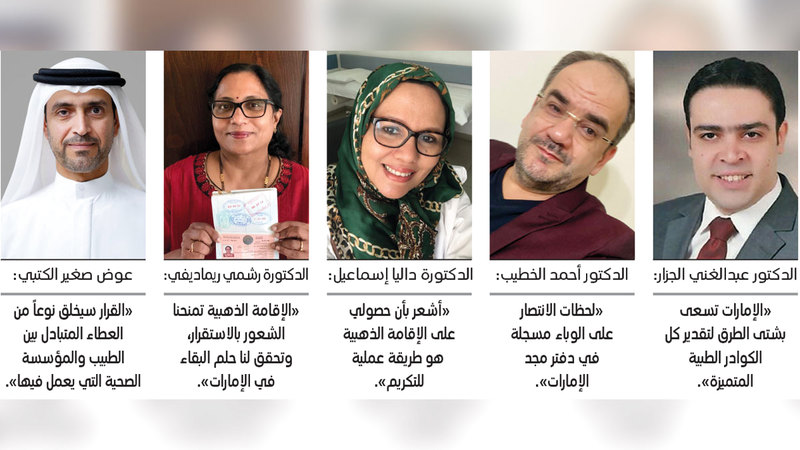 Doctors, who obtained the golden residency, stated that “the UAE is a country of appreciation and giving to everyone who lives on it,” stressing that “all government decisions take into account the resident and the citizen, and that they always succeed in turning crises into opportunities,” noting that their obtaining the golden residency is a dream. achieved by the state.

The UAE government called on doctors in the country to apply for golden residency for themselves and their family members.

She added that they can submit the application in the emirates of Abu Dhabi, Sharjah, Ajman, Umm al-Quwain, Ras al-Khaimah and Fujairah, through the platform of the Federal Authority for Identity and Citizenship (www.ica.gov.ae), or the General Directorate of Residency and Foreigners Affairs in the Emirate of Dubai (www.gdrfad .gov.ae).

They can also visit the authority's service centers in all emirates of the country.

Finally, she published a video clip through her official account on Twitter, explaining the procedures required to obtain a golden residence, indicating that it provides the opportunity for its holders to work and live in the UAE for 10 years.

The required documents included a passport, a copy of a valid health insurance, and a professional license approved by the Ministry of Health and Prevention.

Director General of the Dubai Health Authority, Awad Saghir Al Ketbi, said that the decision of His Highness Sheikh Mohammed bin Rashid Al Maktoum, Vice President and Prime Minister of the UAE and Ruler of Dubai, to grant golden residency to doctors, achieves stability in the health sector, which is rich in many rare specialized competencies, Which had a major role in facing one of the largest pandemics the world has witnessed (Covid-19).

He stressed that "the decision came in appreciation of the role of doctors since the beginning of the pandemic, and it will also create a kind of mutual giving between them and the health institutions in which they work, which will reflect positively on the efficiency of services and the quality of medical care in the country to be the best in the world."

And the family medicine consultant at the Health Authority, Dr. Ahmed Al-Khatib, said: “Do not come around .. do not paralyze them, you are in the beloved Emirates, our tongue was reminding it to ourselves and to everyone who visited this good land, the moments of victory over the epidemic were recorded in the Emirates Glory Book, thanks to God, then, by the efforts of all those involved in addressing the pandemic, and the UAE’s experience is a global precedent in dealing with accelerating events since the beginning of the crisis.”

He added, "The government has made great plans, and made great efforts, to achieve this precedence in limiting the pandemic with vaccines and precautionary measures, and licensing effective new medicines, as well as honoring doctors, as the UAE is a land of humanity, love, safety and mercy."

Dr. Dalia Ismail thanked His Highness Sheikh Mohammed bin Rashid for his generous initiative to grant her the golden residency.

"I feel the decision is a practical way to honor," she said.

He said: «In a time of successive crises, we have seen most countries of the world stumble in their decisions and future steps.

In contrast to everyone else, we saw with our own eyes an exceptional talent for leadership, who was able to turn a crisis into an opportunity, and an obstacle into an incentive.

The decision is not surprising in the country of Zayed the Good, which is at the fore in giving.”

The family medicine specialist, Dr. Farah Muhammad Al-Hassan, considered that the decision embodies the inexhaustible giving, and the generosity that knows no boundaries in a country that has always been accustomed to leadership in everything, and we have learned that giving has a name and loyalty to men.

The family medicine specialist, Dr. Abdulghani Al-Jazzar, expressed his happiness at being granted the golden residency.

He said, "I affirm my gratitude for my work in the Emirates, which seeks in various ways to appreciate all distinguished medical cadres, and provide them with means of stability."

He added: “The golden residency is a badge on our chests, which pushes us towards more diligence in work, and the pursuit of creativity and excellence.

Dubai and the United Arab Emirates have always been the best environment for everyone who is creative and distinguished.”

And family medicine specialist, Dr. Lina Abukuten Nair, considered that "granting her the golden residency is one of the greatest honors that she received during her career," adding that "life in Dubai and the UAE in general is a dream of every human being."

Family medicine specialist, Dr. Rashmi Rimadevi, confirmed that “the golden residency will give us a sense of stability, and fulfill our dream of staying in the Emirates, and it is the culmination of the efforts of a difficult stage that the world’s doctors have experienced since the beginning of the pandemic.”