A year after the Beirut port explosion, doctors are still removing shards of glass from Shadi Rizk's body, the last of which is about a centimeter-sized piece, which remained stuck above his knee for 10 months. There is glass in my thighs and legs, I believe in y 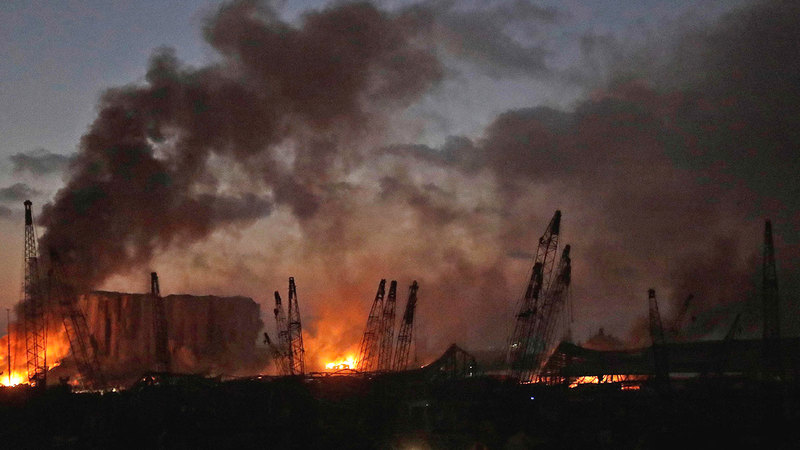 A year after the Beirut port explosion, doctors are still removing shards of glass from Shadi Rizk's body, the last of which was a piece about a centimeter in size, which remained stuck above his knee for 10 months.

Rizk, 36, says, "I find a new shard of glass in my body almost every month. There is still glass in my thighs and legs, and I think in my hands as well."

"The explosion lives inside me, and it will remain so for the rest of my life."

Rizk was standing on the balcony of his office overlooking the port of Beirut when the fire that preceded the explosion broke out.

He picked up his mobile phone and began photographing the rising black smoke, but it was only minutes before the disaster struck.

Shadi documented the first seconds of the explosion, while glass plates fell on him.

The doctors sewed 350 stitches on Shadi's body, and the road ahead is still long. The doctors recently told him that he would need years to remove the pieces of glass stuck in his entire body.

On August 4, 2020, the Beirut Port explosion killed 214 people, injured more than 6,500 people, and destroyed several neighborhoods in the city.

The authorities attributed it to the explosion of 2,750 tons of ammonium nitrate, which has been stored since 2014 in warehouse No. 12 in the port.

"I turned into another person after the explosion," Shadi says. "Everything changed in my life."

Before the explosion, and despite the economic crisis, Shadi had never thought of emigrating “today, I am looking forward to leaving” to Canada.

He adds, "The shock eats you from the inside, as if you are in a state of constant crying, inside."

A year has passed since the explosion that changed the face of the city, without the truth of what happened on that day being revealed, or those responsible for it being held accountable.

Today, political immunities are an obstacle to summoning former deputies, ministers, and heads of security and military agencies, who, according to reports, were aware of the dangers of storing huge amounts of ammonium nitrate in the port, and did nothing to get them out.

"The closer the memory of the fourth of August approaches without anyone entering prison, the anger grows within me...Anger that makes you want to smash, pretend, and throw Molotov cocktails," Shadi says.

The psychotherapist (Rooney) is still satisfied for his part, trying to adapt to losing sight in his right eye, after three surgeries and treatment trips to Europe, to consult experts, perhaps saving some of his vision, but today he can do nothing but sit on the edge A table or in the corner of a room, so that he can see around him with his left eye only.

In his clinic in Beirut, where he was injured, he says, "This country is a great delusion, like everything we were proud of about our ability to overcome all difficulties in order to live and be happy."

There is nothing left but a collective shock in a country that is sinking further into a quagmire of crisis and chaos, and no solutions to save it are in sight.

The explosion exacerbated the economic collapse that Lebanon has been witnessing since the summer of 2019. In more than two years, the lira lost more than 90% of its value against the dollar, and more than half of the population became below the poverty line.

For weeks, the country has been witnessing a fuel crisis, a shortage of medicine, and severe electricity rationing, sometimes up to 22 hours.

"We struggle to survive and survive, but that doesn't give us the right time to come to terms with what happened," Rooney says.

The port explosion uprooted countless doors and windows in Beirut and its suburbs.

For several days the capital's streets were covered with piles of shattered glass, falling from buildings, homes and shops.

A year later, despite the repairs and rebuilding of some buildings, significant damages from the explosion are still clearly visible, and ancient and residential buildings have been destroyed.

On Mar Mikhael Street near the port, Julia Sabra (28 years old) says that she no longer feels safe in her apartment, which she returned to live in five months after the explosion.

Julia remembers the details of what happened to her on that fateful day.

"My friend was unconscious on the ground, and blood covered his face and legs... I focused on him, but I was also saying to myself that there was no longer a house," she said.

Julia is back in her apartment after repairs, and her condition has improved after the shock, but she still can't bear to hear any sound.

"We are terrified of the sounds ... closing doors, storms, winds, for something to fall to the ground," she says.

Today, Julia is gripped by a feeling of "anger and helplessness".

She says, "After the explosion, we said that it was impossible for this ruling class to survive. Their neglect, incompetence and corruption blew up the city... After a year, the situation is still the same. There is no logic in anything."

"There is no rest... We are trying to treat ourselves from the trauma and wounds of the explosion, but we also have to deal with the daily scarcity of everything," she says.

We do not know how to deal with all these problems, and where to start.”

More than two weeks ago, Julia participated with her musical group "Post Cards" in a presentation of the Baalbek International Festival, which included young Lebanese musicians, and performed a song in English, filmed among the ruins of Baalbek, in which she says, "The homeland is sad."

"Something has changed after the explosion," she told AFP.

I don’t know if it can be said that Beirut has lost its soul.. I think its soul is still there, but it is a broken soul.”

On August 4, 2020, the Beirut Port explosion killed 214 people, injured more than 6,500 people, and destroyed several neighborhoods in the city.

The authorities attributed it to the explosion of 2,750 tons of ammonium nitrate, which has been stored since 2014 in warehouse No. 12 in the port.

• A year later, despite the repairs and rebuilding of some buildings, significant damages resulting from the explosion are still clearly defined, and the ruins have affected ancient and residential buildings.