Svetlana Tikhanovskaya..a young mother who became the face of the democratic movement in Belarus

Until last year, Svetlana Tikhanovskaya was a housewife with two young children, one of whom had special needs, but that all changed when the authorities jailed her husband, a prominent opposition presidential candidate, and within weeks, she became the face of the pro-democracy movement in Peel. 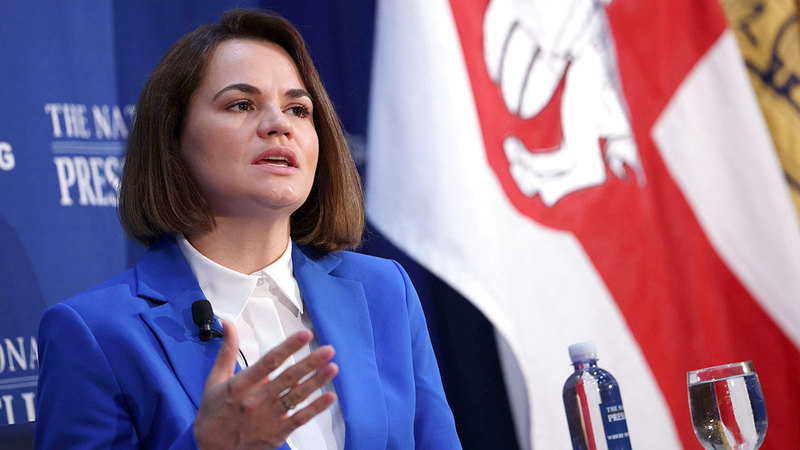 She lives with her two children in exile in Lithuania

Svetlana Tikhanovskaya..a young mother who became the face of the democratic movement in Belarus

Until last year, Svetlana Tikhanovskaya was a housewife with two young children, one of whom had special needs. That all changed when the authorities jailed her husband, a prominent opposition presidential candidate, and within weeks, she became the face of the pro-democracy movement in Belarus, where she began to fight His battle to eliminate the so-called "last dictatorship in Europe".

This may seem like a fictional effort, prompting some to describe her as Belarusian "Joan of Arc", but Tikhanovskaya, 38, who lives with her two children in exile in Lithuania, is brave enough.

After all, the former English teacher got more than she could have dreamed of, in May 2020, when her husband, Sergey Tsykhanovsky - a video blogger and outspoken critic of powerful Belarusian President Alexander Lukashenko - was arrested along with other opposition candidates, boosting her stock. political.

Tikhanovskaya ran for president in her husband's place, launched a fierce campaign against the current power, and became a pot of hopes for Belarusians who wished to get rid of Lukashenko's repressive rule, which has lasted 27 years so far, and claims that he won 80% of the vote last August, which sparked protests and strikes. Mass arrests are unprecedented in this former Soviet republic, but some Belarusians still consider Tikhanovskaya the "elected president."

Who is this young woman who spent the past week in Washington meeting with senior officials in the administration of US President Joe Biden, members of Congress, European diplomats, and members of the Belarusian diaspora?

And how did you mobilize steadfastness to wear the mantle of resistance in a country with a population of 9.5 million people?

In an interview with the Monitor newspaper, last Wednesday, at the Willard Hotel, near the White House, Tikhanovskaya spoke about how she had learned to stop describing herself as a "weak woman", or what she described her time in Ireland as a "Chernobyl child." Its views on democracy and its plans for the future.

As she says, her plan was not to serve more than a short term as president, and her plan still is, if Lukashenko's regime were to somehow collapse, and she describes herself as a transitional figure, and if she was declared the winner, last August, she would have released political prisoners in the country, She immediately held new elections, which may explain her answer to a question about her female leadership role.

“I would name strong women, like Margaret Thatcher, but I think my role model was Princess Diana, she was a resolute woman, and people were her most valuable,” she says. “It was very important for her to communicate with ordinary people to show kindness, My heart cries for everyone behind bars, it's so hard to work, you know, keeping that feeling inside, but I can't do otherwise."

Tikhanovskaya expressed her sympathy last Sunday at a Belarusian-American pro-democracy rally in Freedom Square in Washington, where she posed for pictures with children, including a toddler in a wheelchair.

She also shows a steely determination that has taken her to European capitals, and now to Washington, to press for tougher economic sanctions on the Belarusian regime. This week, she met with US Secretary of State Anthony Blinken and National Security Adviser Jake Sullivan, and co-launched the Friends of Belarus rally in Congress Bipartisan, then she met President Joe Biden.

The newspaper asked her about the validity of what the Belarusian authorities had told her about whether she had to choose between her two children or prison? She responded that it happened to her twice, first during the election campaign. "I got a phone call, and the speaker told me that if I didn't stop doing it, I would be imprisoned, and my two children would be put in an orphanage," she says. a lot, and she goes on: “But I could not betray the people who believed in me, who believed in my husband, and believed in the changes in our country, so I decided to send my two children to Lithuania and continue my campaign, but after the elections I went the next day to the Electoral Commission, to present the document which states that we do not We agree with the fraudulent elections, and there the dignitaries and the military gave me a choice: Go to Lithuania for your children or you will be in prison for years and your children will live without you. “At that moment, motherhood moved inside me and I chose to join my two children,” she says.

Tikhanovskaya grew up in a family that was not interested in politics, and she believed that nothing could be changed unless she had the opportunity to communicate with others, and she visited Ireland several times as a “Chernobyl child” and had the opportunity to see countries that live better, where people are happy They are free, and they have the right to say whatever they want.

The dignitaries and the military gave me a choice: go to Lithuania for your children or you will be in prison for years and your children will live without you.

Tikhanovskaya describes herself as a transitional figure, and had she been declared the winner last August, she would have released the country's political prisoners and held new elections immediately.