"Going our own way is the basis of all the party's theory and practice, and it is the historical conclusion drawn by the party's centuries of struggle."   On July 1, 2021, at the celebration of the 100th anniversary of the founding of the Communist Party of China, General Secretary Xi Jinping emphasized that we must uphold and develop socialism with Chinese characteristics if we learn from hist 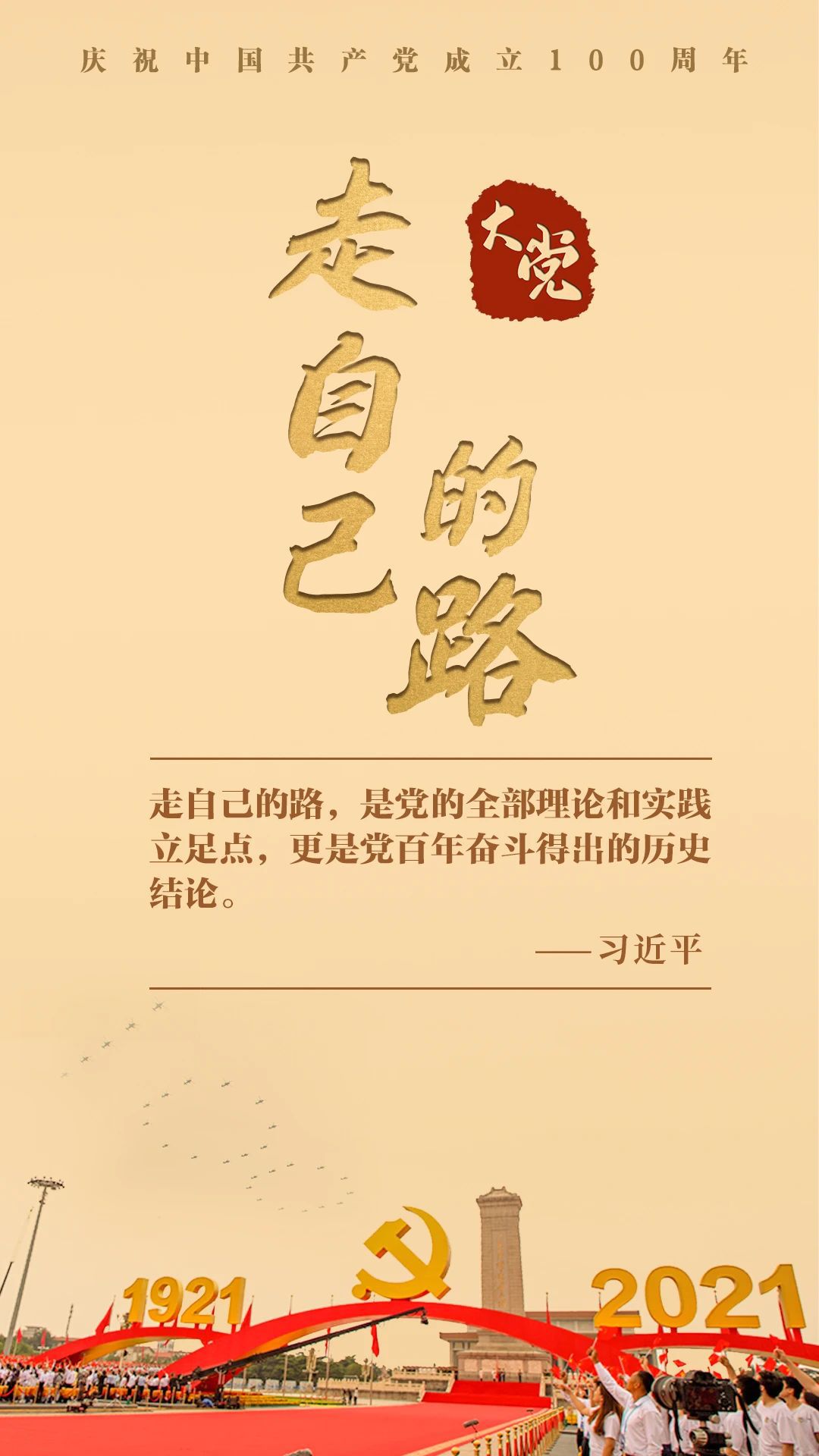 "Going our own way is the basis of all the party's theory and practice, and it is the historical conclusion drawn by the party's centuries of struggle."

On July 1, 2021, at the celebration of the 100th anniversary of the founding of the Communist Party of China, General Secretary Xi Jinping emphasized that we must uphold and develop socialism with Chinese characteristics if we learn from history and create the future.

Socialism with Chinese characteristics is a fundamental achievement made by the party and the people through untold hardships and a huge price. It is the correct path to the great rejuvenation of the Chinese nation.

For one hundred years, the Communist Party of China has persisted in proceeding from reality in everything, and has led the Chinese people to explore the path of socialism with Chinese characteristics.

History and practice have and will further prove that this road is not only right and feasible, but it will also be able to go steadily and well.

Before the founding ceremony, there were divergent opinions about what repertoire the military band would perform. There were opinions on the use of German, Soviet, and American music.

In the end, Mao Zedong decided: listen to his own music and go his own way.

In Changsha, Hunan, on the banks of the Xiangjiang River, Yuelu Academy, a thousand-year-old university, stands quietly.

More than 100 years ago, the energetic young Mao Zedong thought about ways to "transform China and the world" here.

In the drizzle, Xi Jinping looked at the "seeking truth from facts" plaque on the eaves of the lecture hall, and pondered for a long time: "How can the Communist Party succeed? Back then, there was a boat on Nanhu in Shikumen, and there were a dozen people. The road inside must be clear, and the truth must be localized."

On the banks of the Jiuqu River and under the Hidden Peak, Zhu Xi Garden is set amidst the green mountains and green waters.

Since the 18th National Congress of the Communist Party of China, the Party Central Committee with Comrade Xi Jinping at its core has focused on the new stage of socialist development, faced the transformation of major social contradictions, and promoted the powerful country of socialism with Chinese characteristics with a new vision and pioneering practice. The road to enrich the people is getting wider and wider.

"The Chinese nation has a splendid civilization formed in more than 5,000 years of historical evolution. The Communist Party of China has a century of hard work and more than 70 years of experience in governing and rejuvenating the country. We actively learn and draw on all the useful achievements of human civilization. We welcome all useful suggestions and well-intentioned criticisms, but We will never accept the preaching of the'teacher'!" At the celebration of the 100th anniversary of the founding of the Communist Party of China, the general secretary's words were loud and loud.

"Shoes fit or not, you only know if you wear them." When Xi Jinping gave a speech at the Moscow Institute of International Relations on March 23, 2013, he used this simple sentence to reveal that a country’s development path is not appropriate, and only his own The people have the most profound truth.

On July 6, 2021, at the Summit of the Communist Party of China and World Party Leaders, Xi Jinping once again used the analogy of "shoes" and "feet" to clarify that "the path to modernization does not have a fixed pattern. The best that suits you is the best. Cut your feet to fit your feet".

"China will never be attached to any country, will not follow in the footsteps of major powers, and has been walking its own way. This is a guarantee to China as well as a guarantee to the world. The miraculous achievements that China has created have proved this. The correctness of the road." The Turkish Patriotic Party Chairman Pelincek said that one of the great achievements of the Chinese Communist Party is that it believes in its own creative ideas and relies on the power of the people, and finally took its own path.