After the strong thunderstorms yesterday afternoon, bad weather continues to hit the north of Italy. The damage count begins &nbsp; 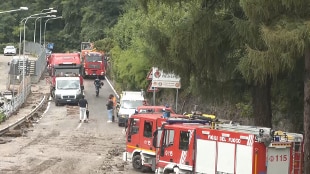 July 26, 2021 After a night of uninterrupted rain, Lombardy remains at the center of the wave of bad weather.

Landslides and landslides in the provinces of Sondrio and Como.

Whirlwind in Gallarate, in the province of Varese.

The force of the wind has uncovered the roof of a building, but fortunately it has not caused many inconveniences.

Hail in Brianza and Bergamo,

The damage is counted in the Como area, where a landslide on the eastern shore of Lake Como hit the town of Blevio. The roads turned into rivers of mud and debris, which found dozens of cars. Some families, as a precaution, have been evacuated from their homes. Firefighters and Civil Protection personnel have been working since yesterday. Other landslides due to flooding streams have isolated two hamlets upstream, while the former state road 583 Lariana was also temporarily closed. Bad weather did not spare the city of Como with flooding, steps and fallen trees. Damage also in the Cantù and Olgiate Comasco areas.

Summer 2021 went from hot weather to water bombs and hailstorms. A situation that in the northern regions hit by bad weather in recent days have caused the damage count to rise. According to data from the European Severe Weather Database (ESWD), up to now, there are already 556 extreme events across the peninsula, according to Coldiretti's analysis of the latest wave of bad weather that devastated corn fields. , kiwis, vineyards, and vegetables. "A real calamity - underlines Coldiretti - in a particularly delicate moment for agricultural crops with harvests in progress as we approach the harvest".

The most damaging event, Coldiretti points out, is hail because it destroyed a whole year's work in just a few minutes, such as in the province of Lecco where corn and vegetable crops were machine-gunned by the grains after the storm of water, wind and ice. "In the province of Mantua, the vineyards of Merlot, Cabernet and Chardonnay, but also of corn, kiwi and tomato have been damaged.