Jennifer Lopez confirms her romance with Ben Affleck on Instagram

Jennifer Lopez seems to have confirmed her romance with actor Ben Affleck on Instagram. The artist has published several photographs of her 52nd birthday, celebrated this Saturday, and ... 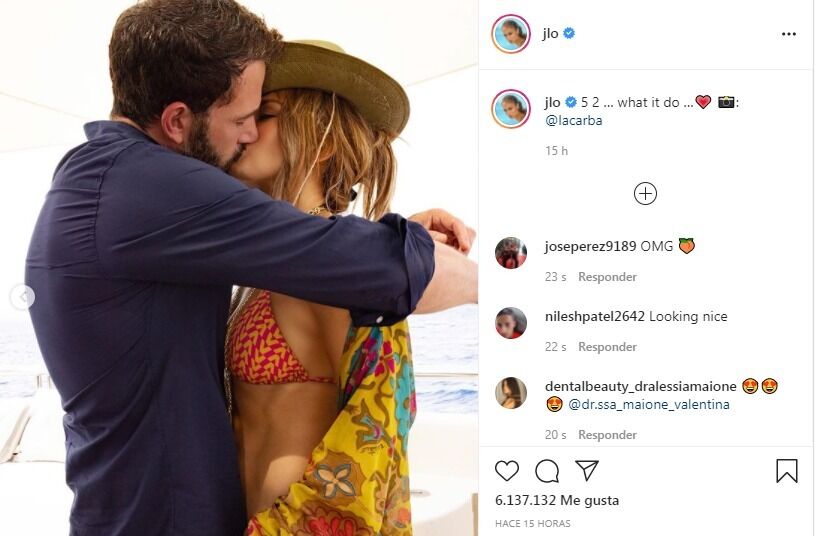 seems to have confirmed her romance with actor

The artist has published several photographs of her 52nd birthday, celebrated this Saturday, and in one of them she appears kissing Affleck, although she has not tagged him in the publication.

Reconciliation bells have long been ringing. On Friday, the actress and friend of the singer Leah Remini published some images of the couple taken in June, in celebration of her birthday and several weeks ago the paparazzi also published images of the couple, after Lopez ended her relationship with him. baseball player Alex Rodríguez. In addition, in an interview he recently acknowledged that "he had never been better" than at this time.

The beginnings of Jennifer Lopez and Ben Affleck's relationship go back

They began dating for the first time in June 2002, that same year they got engaged and in just a few months they got married, although at the beginning of 2004 they announced their breakup.

Later, both of them rebuilt their lives with different couples, until almost 20 years later it seems that they have met again.