Hell in Sardinia, vast burning in the Oristano area: hundreds of evacuees

400 people evacuated to Scano Montiferro. The Sardinian governor, Solinas: unprecedented disaster, "I will ask Draghi that a share of the PNRR is immediately destined for the Region" 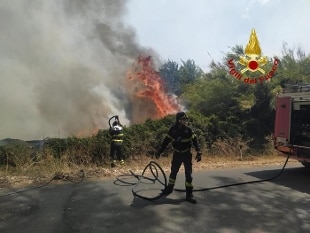 Since yesterday evening the firefighters have been fighting against the flames that have come to lick the houses: the forest fire started from Bonarcado, and thanks to the high temperatures and the strong wind, it spread to the inhabited area of ​​the neighboring villages forcing residents to flee their homes, while the fire devoured hectares of land, killing even animals and flocks. In the morning the flames came to lick the Borgata Marina of Porto Alabe, in the territory of Tresnuraghes, forcing the mayor Giovanni Mastinu to sign the evacuation order for the tourist area.

Four hundred people who live on the outskirts of the village

, in the Oristano area, have been removed from their homes, some of which have been lapped by flames. Mayor Antonio Flore has set up a collection center in the municipal gym. Meanwhile, the fire continues to advance towards the mountains between Santu Lussurgiu and Macomer threatening San Leonardo - where the springs of Siete Fuentes and a small tourist village are located - and Monte Sant'Antonio. The Sassari firefighters are working for the water supply, the extinguishing of the outbreaks and the rescue of livestock.

"The fires continue to be active on several fronts. All available teams, at least twelve, are on the spot", they say from the Operations Room of the Oristano Fire Brigade Command station. "As for the displaced, the latest updated number was about 200 people." The fires - even if in reality,

, "it is a single fire that spreads on several fronts" - concern "Scano di Montiferro, Porto Alabe", but some front "is returning towards Cuglieri". But, they assure, "the apparatus is working, even if the situation is quite complex because there is wind". And the fact that it could be a fire by arsonists "is too early to tell".

It is not yet possible to

caused by the fires still underway in the Oristano area, but it is an unprecedented disaster. Ten thousand hectares of vegetation destroyed, businesses and houses burned, livestock killed. The region's machine, says President Christian Solinas, is fully mobilized: 7,500 men, 20 aircraft (7 Canadair and 13 helicopters) are engaged non-stop to face a dramatic moment for the whole of Sardinia. Solinas asked the government for "immediate economic support to repair the damage and help the affected communities to start again. I will write to President Draghi, he continues, to also ask that a portion of the PNRR be immediately allocated to the Region". Meanwhile, concern is growing for high temperatures that make extinguishing operations more and more difficult:maximum values ​​expected for tomorrow with very high values ​​on Campidano, Oristanese, Valli del Tirso and Coghinas.