"Fireworks" landing! Will the rain in Jiangsu, Zhejiang and Shanghai be heavier than Henan?

China News Service, Beijing, July 25th. This year's No. 6 typhoon "Fireworks" has landed on the coast of Putuo, Zhoushan, Zhejiang Province.   The "fireworks" that hovered over the sea for many days had an important impact on the heavy rain in Henan, and now they have finally landed. Many netizens are worried that the "fireworks" will bring more heavy rain to Jiangsu, Zhejiang and Shanghai than 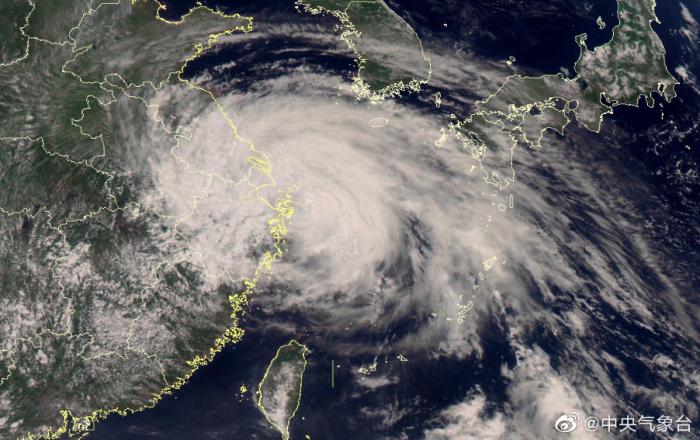 The "fireworks" that hovered over the sea for many days had an important impact on the heavy rain in Henan, and now they have finally landed. Many netizens are worried that the "fireworks" will bring more heavy rain to Jiangsu, Zhejiang and Shanghai than Henan?

According to the latest news from the Central Meteorological Observatory, Typhoon Fireworks made landfall on the coast of Putuo, Zhoushan, Zhejiang Province at around 12:30 on the 25th. The maximum wind force near the center was 13 (typhoon level 38 m/s) when it landed.

Prior to this, the Central Meteorological Observatory continued to issue an orange typhoon warning at 10:00 on July 25.

The Meteorological Department predicts that from 14:00 on the 25th to 14:00 on the 26th, there will be 6-7 strong winds and 8-9 gusts in Hangzhou Bay, south-central Jiangsu, Shanghai, eastern Zhejiang, and coastal areas of north-central Fujian.

Forecast map of heavy rainfall throughout the country.

The Central Meteorological Observatory continued to issue an orange rainstorm warning at 10 o'clock on the 25th: It is expected that from 14:00 on July 25th to 14:00 on the 26th, there will be heavy rains or heavy rains in parts of central and northern Zhejiang, Shanghai, southern Jiangsu and other places.

Some of the above-mentioned areas are accompanied by short-term heavy rainfall (the maximum hourly rainfall is 30-60 mm, and the local area can exceed 80 mm), and local areas have strong convective weather such as thunderstorms, gales or hail.

In addition, the Ministry of Natural Resources and the China Meteorological Administration jointly issued a meteorological risk warning for geological disasters at 8 o'clock on the 25th:

It is estimated that from 8:00 on July 25 to 8:00 on July 26, the meteorological risk of geological disasters in most parts of Zhejiang, southern Anhui and other places is relatively high (yellow warning).

Among them, the meteorological risk of local geological disasters in northern Zhejiang and southeastern Anhui is high (orange warning).

How strong is the "firework"?

There were gusts of magnitude 9 to 11 in Pudong, Baoshan, Fengxian and other places.

According to its latest news, from 5:00 to 11:00 on the 25th, there were heavy rains and local torrential rains throughout Shanghai.

Previously, the rare extreme rainstorm in Henan was also affected by "fireworks". Now, will the rainfall in Jiangsu, Zhejiang and Shanghai be as extreme as Henan?

On the 24th, China Weather Network analyzed that purely from the perspective of accumulated rainfall, if extreme conditions are considered, the difference between the two processes of Zhejiang and Henan may not be too great.

According to analysis, if the "fireworks" "station" stays in one place after landing, and the typhoon rain continues to be concentrated in the same area, the cumulative rainfall is likely to be very extreme; and if the typhoon swings, the affected area can also have respite The accumulated rainfall will not be so extreme.

"Fireworks" landed in Zhoushan and storms hit the embankment.

Except for the violent storms in Zhejiang, Shanghai and other places, in the next few days, the surrounding area of ​​typhoon "Fireworks" will sink and the hot and sultry weather will develop.

It is expected that the central and western parts of Jiangnan and most of southern China will be affected. For example, the high temperature weather in Fuzhou, Guangzhou, and Nanning will continue.

Zhejiang and other places are waiting

After comprehensive research and emergency consultation, the China Meteorological Administration has upgraded the emergency response of major meteorological disasters (typhoons) from level III to level II.

At 12 o'clock on the 24th, the Zhejiang Provincial Anti-Fighting Finger decided to upgrade the typhoon emergency response to level I.

Provincial prevention refers to the requirement that when necessary, all localities can declare an emergency flood prevention period and take measures such as suspension of work, class, city, transportation, and traffic road closure.

The Zhejiang Flood Control and Drought Prevention Headquarters issued a report on the 24th that according to incomplete statistics, as of 12 o'clock on the 24th, Zhejiang had opened 10,780 disaster shelters, of which 2,737 were used, and more than 100,000 people have been transferred.

As of 17:00 on the 24th, in order to prevent traffic accidents caused by strong typhoons, all passenger shuttles at major passenger stations in Hangzhou have been suspended.

All ships in Hangzhou shipping area are prohibited from sailing.

In order to ensure the safe operation of passenger trains, the Yangtze River Delta Railway has decided to suspend operation of the Xiaoyong Railway, Jintai Railway, and Ningbo-Wenzhou Section of Hangzhou-Shenzhen Railway from July 25th to 27th; on July 25th and 26th, Hangzhou-Ningbo High-speed Railway Suspension, Jinshan Railway was suspended; on July 26th and 27th, Jinqian Railway was suspended; from July 26th to 28th, Jinwen Railway and Qujiu, Quning, Xuanhang, Wangan Railway were suspended.

The latest news from Zhejiang Airport Group shows that due to the typhoon, all flights at Hangzhou Airport on the 25th have been cancelled.

According to the current weather forecast, the flight on the 26th will also be cancelled significantly.

As for the rescue team, according to previous news, more than 90,000 people in Zhejiang armed police, militia, fire rescue, social rescue, professional rescue, etc. are already in a state of preparation. They will rely on the province’s natural disaster risk prevention and control and emergency rescue platform to organize timely rescue operations. Rescue.

"Fireworks" landed in Zhoushan, and the wind and rain were mixed.

In Shanghai, on the evening of July 24, the whole city of Shanghai launched a second-level response to flood control.

The latest news from Shanghai Airport Group is that all passenger flights in and out of Shanghai Pudong Airport and Hongqiao Airport will be cancelled throughout the day on the 25th.

In addition, at present, all Shanghai ferry lines are suspended, and all trucks on the Donghai Bridge are prohibited.

According to media reports, the latest news from the Shanghai Railway Department, affected by the typhoon "Fireworks", from 19:00 on July 25 to 12:00 on July 26, all trains entering and leaving Shanghai high-speed rail were suspended.

Long-distance passenger transport is expected to suspend 438 classes on the 25th, mainly in Zhejiang and Jiangsu provinces.

In order to ensure the safety of citizens and tourists, Shanghai Oriental Pearl, Shanghai Tower, and Jin Mao Tower issued announcements on the 25th, announcing the suspension of operations of the Tourist Office.