Israel has had an offensive strategy regarding vaccination against covid-19. Already last year, they began vaccinating adults. It is now the first country in the world to start giving a third dose to risk groups and children over the age of twelve are fully vaccinated. 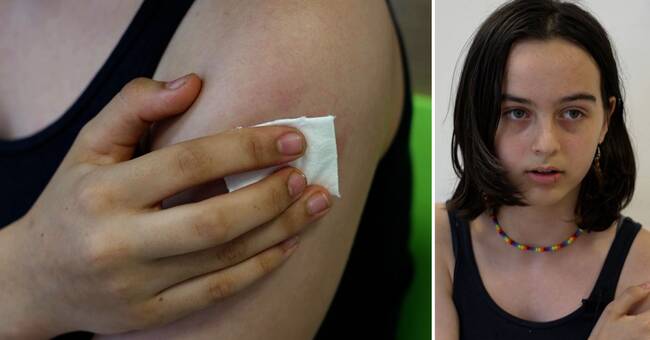 There is a queue up to the number plates at the vaccination clinic in Tel Aviv.

Shira Korngut is sitting in the waiting room with her mother and Ealli Nadiv has her grandfather with her.

Both are twelve years old and waiting for their second syringe.

- All my friends have taken it, I'm a little nervous.

But it is also important for it to be as before, says Ealli Nadiv.

The delta variant is increasing

Children and adolescents between the ages of 12 and 16 have been able to get vaccinated against covid-19 since the beginning of June in Israel.

In recent weeks, the spread of the delta variant has increased in the country and it has led more parents to vaccinate their teenagers.

- Now that I have received the second injection, it means that I can do more things that I could not do yesterday.

For example, going to a restaurant, says Shira Korngut.

Despite an increased spread of infection, the number of seriously ill people with covid-19 who are admitted to Israeli hospitals is significantly less compared with this spring.

As the country has previously had a strong shutdown, the 12-year-olds at the vaccination clinic hope that the syringes provide new opportunities and that the schools are open this autumn.

- It is really my wish that we do not shut down again, says Shira Korngut.