The Zabajkalsky region in eastern Russia has been hit hard by heavy rain in recent days. The rain has, among other things, caused stops on the Trans-Siberian Railway and floods in hundreds of houses. 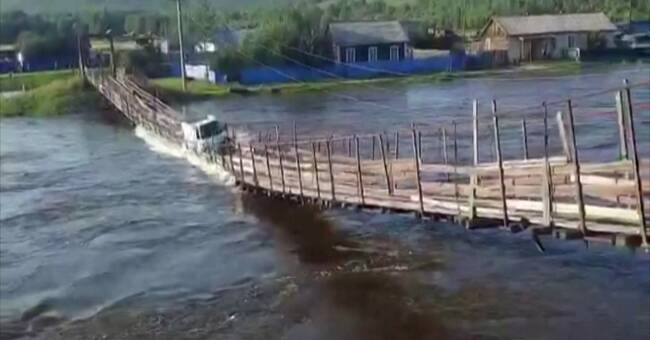 Train traffic on the Trans-Siberian Railway, the world's largest railway network, was halted in the Zabajkalsky region in southern Siberia on Friday, Reuters reports.

The reason is that a railway bridge collapsed as a result of a violent rainstorm that pulled in over the area on Wednesday.

The work to repair the bridge is expected to take five days, according to Russian President Vladimir Putin

"The first section will open in two or two and a half days," Putin said in a meeting with the country's security council, Reuters wrote.

No one should have been injured in connection with the bridge crash.

The extensive rainfall has also led to at least about 650 houses in the Zabajkalsky Krai being flooded while five road bridges were destroyed.

A video from the area shows how a van tries to cross a temporary bridge over a flooded lake that hangs dangerously close to the water surface.

When the van reaches the center, the bridge sinks and gets stuck in the water.

The driver managed to get out, but the car disappeared into the water.