The two prison guards at Hällbyanstalten were held hostage for nine hours. The two hostages convicted of murder are said to have given up at 21.20 and have been transferred to the police station in Eskilstuna. - We have held initial interrogations where they have been notified of suspicion of kidnapping. They do not want to speak without a defender but deny the crime, says Thomas Tellebro who is an investigator at the police. 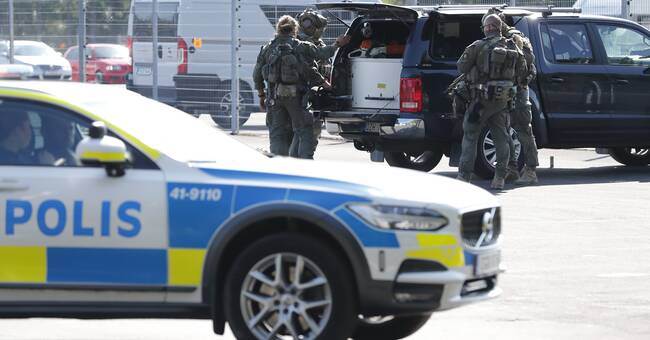 The police investigation into Wednesday's hostage situation at Hällbyanstaltet is at an early stage.

The police have begun to take an interest in camera surveillance at the institution.

- They have cameras inside the institution.

It is standard measures to go through the material that is available.

We have started by securing the material and will go through this to see if there is anything of value.

There are more cameras than the covered ones

During the hostage drama, the suspects are said to have covered surveillance cameras.

- There are more cameras than those that have been covered.

Above all, it is interesting to see what happened before the situation arose.

That is what we are trying to clarify now, says Thomas Tellebro.

The two suspects have been transferred from the institution to the police station.

Initial interrogations have been held there.

- They have only been notified of suspicion in these initial interrogations.

They have also been informed that they have the right to a public defender.

When we talked to them about this, they did not want to comment further on what had happened.

We have been able to book more interrogations with defenders present where we will be able to ask in more detail what happened.

They are notified of suspicion of kidnapping.

Have been able to talk to the carers

The police have also been able to talk to the two prison guards who were held hostage for many hours.

- We spoke to them late last night and we will contact them during the day.

Both to ask more questions about the event but also to assure us that they get the support they need, says Thomas Tellebro.

On Thursday, police work will continue, where the main focus will be on questioning the suspects.

- We must keep them before prosecutors can go ahead and assess whether that information is sufficient for detention or not.

That is our priority today.

We will also talk to the other employees at the institution who worked at the time to be able to broaden the picture.

According to Thomas Tellebro, the operation ended without violence.

- That's how I understood it.

There were no further requirements than the initial ones.

There should have been no violence, but the suspects simply gave up.

I'm not entirely sure what they should have used for weapons other than that it should be some form of handmade weapon.

According to the police, they both deny suspected crimes.

Security Director Kenneth Holm "No secret that we had it tough for several years" Photo: SVT / TT