Jouko Turkka continues to arouse strong feelings for and against. Theater director and author Jouko Turkka died at the age of 74 on July 22, 2016. Turkka is remembered for his numerous instructions and, above all, for his time at the Theater Academy (now the Theater Academy of the University of the Arts Helsinki), first as a teacher and later as rector. Turkka’s time at school was something that is still remembered to this day. Extreme athleticism and the famou 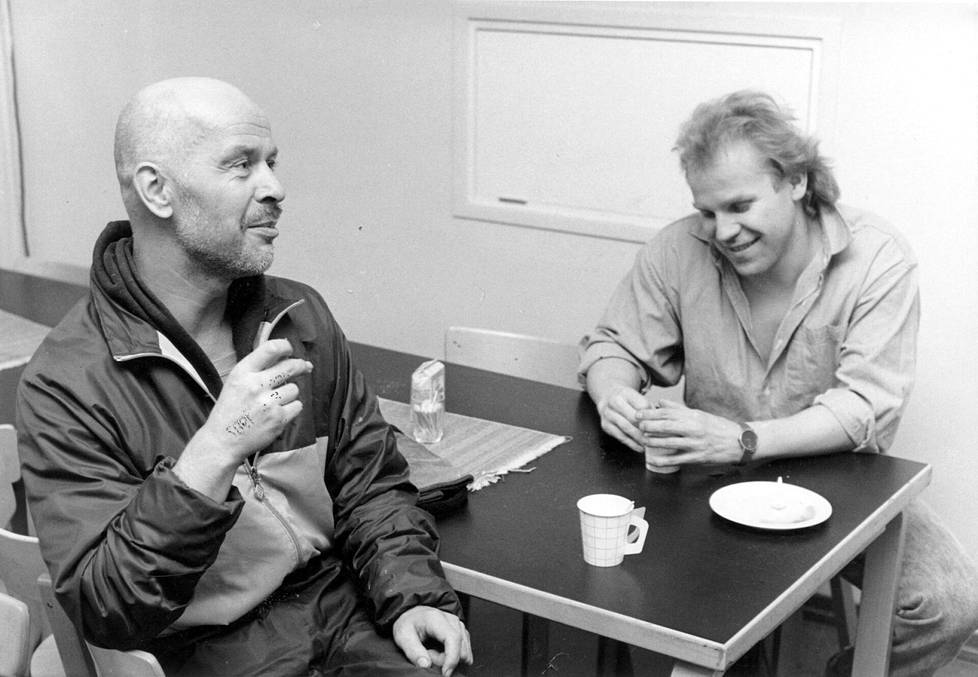 Turkka’s time at school was something that is still remembered to this day.

Extreme athleticism and the famous “hork show” made him a concept even among people who were not otherwise interested in theater.

It was said that there is no point in going to school if you do not run at least 3000 meters in the Cooper test.

This also applied to women.

Their own topic itself was the three-stage entrance exams to the school.

The general opinion is that some students of that time remember Jouko Turkka as a sadistic bully and others as a larger, almost sectarian and mesmerically speaking person, a genius.

Jouko Turkka and Jussi Parviainen photographed on January 19, 1987, two days after the Theater of God.

"I would definitely get someone's diagnosis nowadays"

Actress Mari Rantasila got to study at the Theater Academy with her third attempt.

- For me, Turkka was primarily a teacher who gave me perspectives on being an artist.

The way an artist perceives the world and uses his or her observations for work.

He says his own worldview was completely different from Turkan.

Nevertheless, he decided to throw himself into teaching to the fullest.

- I decided that I like the good things of teaching and throw away the bad ones.

Rantasila even has a warm memory of Turkka.

- In the spring of a course, I did a speech demonstration that consisted of a childhood experience I had written when a man unknown to me was sexually harassing me.

I combined the poems of Edith Södergran with the text.

- Afterwards, Turk thanked me for it and said how my presentation aptly described how awful a woman's life can be.

Several Actors repeatedly talk about how they have been left with traumas from the teaching of Turk.

Rantasila is not one of them.

- I have had more traumatic experiences in an amateur theater and a few professional jobs.

- Of course, at school I was always haunted at times, but it is about studying and being an artist in general.

Mari Rantasila has worked as a musician.

In 2000, she sang the Raid TV series theme song “Just Love” and was awarded the Emma Award for Female Soloist of the Year in 2000. She also starred in the female lead in both the Raid series and the film.

Rantasila emphasizes that when talking about Turk, he only talks about his own experiences and does not want to nullify the negative experiences that many of him have.

He sees Turk in a way as a child of his time.

Society at that time also made these ways of teaching possible, unlike today, when the world was completely different.

- What was appropriate and acceptable then is no longer, and good.

There was no longer any knowledge of Turkey's sense of power in the 1980s.

He was not stable in his mind, and this was accentuated after theater school time.

- He would have needed help with his mental health.

Rantasila believes that Turk was a difficult person for his loved ones.

Despite everything, he feels that he has received a lot from Turka as a teacher, which he has benefited from in his profession.

He no longer goes to Sweden's value in Finnish theater.

- Undoubtedly, he has influenced it in one way or another.

Turkey and seven brothers and Venla.

"You have no right to comfort"

Several books have been written about Turkka's time, in which students who attended the Theater School during that time have made harsh accusations against him.

Examples of these include Katja Kiuru's Pieces and as a whole: a man on stage and Jarmo Salminen's Children's Crusade.

Actor Martti Soovalo is perhaps Turkey's most successful student, if the number of viewers in both cinema and theater is considered a measure.

He has categorically always said that without Turkey he would never have become the actor he is.

The popularity entered the school on the third try.

Among the tests, he remembers, among other things, how Turkka punched him against Pauli Pora, who was already inside the school.

- I guess in that, Turkey wanted to test how to do in a desperate situation and what to do when you can no longer just fight.

He says he never considered Turkey to be any kind of brother or father figure.

- I was used to shouting coaches when I was playing football, so I knew how to take shouts the right way.

- Anyway, I liked to stay on the sidelines a bit to follow the situation from a distance.

And Turkka, on the other hand, didn’t like the intruders who tried to get close by pleasing him.

The favorite physically recalls the trajectories taken from hockey and dance, as well as the emotional states, that were the basis of the physical exercises.

- Yes, Turkka was a dictator in the sense that all other subjects were subordinate to the subjects he taught, ie he also prescribed other teachers through this.

He also recalls that humor was strongly present among the students.

- Without humor, no one can stand such training.

We kind of harbor with humor the things that would have caused trauma there.

However, humor alone was not always enough.

Popular wants to know that some students have suffered severe traumas and left the school.

- Yes I have warm memories of school and all my fellow students.

The famous “hork actor” puts a smile on Suosalo’s mouth.

- Most, myself included, just tried to cope with it by imitating badly.

He also didn’t like if another student tried to comfort a student who received crush feedback.

- Turk said that “you have no right to comfort” and I finally realized that this is the case.

- As if with what chips I am comforting another and placing myself above the consolation in a certain way.

- We still didn't blindly accept everything, even though people may have such a picture of it.

Martti Lemmalo says that he was used to coaches shouting next to him when he played football when he was young.

Although Turkey did not teach many year-long courses in the end, his reputation and public presence may have left a distorted memory in people's minds, where he would have taught more classes than he eventually taught.

- It is certainly also related to the so-called “post-Turkism”, ie the time after Turka was in school, which has influenced people's minds that Turkka would have taught them, saysalo.

According to Suosalo, it is only in recent years that the ghost of post-Turkism has been completely unleashed.

Although school time did not cause him trauma, the teaching style would no longer be acceptable today.

- Those exercises could no longer be done.

There were also comic features associated with the theater era.

- We students were considered in the taverns as tough guys and some kind of celebrities when we were under Turk and the public was known for his greatness because he was so present and loved it (presence).

The popularity had little to do with Turk after school.

However, the memories remain.

And I'm nothing to justify him.

I have no right to mourn his fate.

An authentic Turk, then.

The playwright Jussi Parviainen, cooked in many broths, was once known at school as Turka's right hand man.

Parviainen was also pressured to leave after the afternoons of God's theater.

While Parviainen was attending school, Turkka had not yet influenced the Theater School.

- Turkka then came to see my theater performance Lover of God sometime and asked me to apply for a position as a lecturer in dramaturgy at school.

Parviainen applied for a position, although Outi Nyytäjä was elected.

Soon, however, Parviainen got to school as Turk's right hand man.

He admits the school has certainly been tough for many students.

- Of course, I'm not going to deny anyone's experiences.

Parviainen says Turkka is still one of the greatest directors in the world and raises him to the same category as the Russian Masters Konstantin Stanislavski and Vsevolod Meyerhold.

Although Parviainen's voice has a sheer dose of admiration, he does not admit that he was a friend of Turkka.

- I probably didn't have any friends in that sense.

That school was everything to him, and he certainly didn’t have an awful lot of relationships after that.

He states that the same fate happens to many great men, that work and the appreciation that comes through it determine everything.

When the work is over, suddenly there is nothing left.

- This is often reflected in retired politicians who have held important positions in the past.

Parviainen wonders that so many who studied at the school still say that they were a student of Turkka these days.

- After all, Turkka taught a relatively small group, but still people who attended a single course boast that they are his students.

He raises Kai Lehtinen and, above all, Antti Virmavirta as the “products” of Turkka's education.

Instead, Jarmo Salminen, who wrote about Turkka's time in his book Children's Crusade, can get the crab.

- There is no such person as having to bother to comment on his limited writings.

Jussi Parviainen says that he does not feel that he was a friend of Jouko Turkka, even though the men were close at the Theater Academy.

The end of Turkey came with the theater of God.

During the Nordic Theater Days in Oulu, four school students Esa Kirkkopelto, Jari Halonen, Jorma Tommila and Jari Hietanen behaved aggressively towards the audience in their performance, throwing the audience in the stool, among other things.

The ever-increasing pressure on the school's teaching methods grew to its legal point, and the Minister of Culture Gustav Björkstrand (RKP) demanded the heads of Turkka and Parviainen.

- Even today, I was asked what it felt like to throw a crowd in Oulu.

The common distorted delusion is that it would have been a thing machined by Turkka and me, but that was by no means the case.

The damn theater rose to be the “defenders” of the students who were in God’s theater and demonstrated in his school that the school furniture was breaking.

- It was inevitable that eventually the school would be destroyed in one way or another.

- I think Turkka somehow wanted to see the school burning and so he told me that he wants to see the sea of ​​flame behind him when he leaves school, Parviainen recalls.

Jouko Turkka spent his last years in his childhood landscape in Pirkkala.

There was also the famous "stone collecting stage" at that time.

Parviainen states that the Theater Academy in Turku was so popular in the media at that time that it grew too big.

- All the gossip that who was with anyone, there were enough.

There was no name in them and gossip was told by those who were not even close to school.

When asked to describe Turkey with only one adjective, the answer comes as from a pharmacy shelf.

Ilta-Sanomat also reached out to Turkka's son Juha Turkan, who, however, politely refused to give any interview.