Covid. Fear of contagion, Italians rediscover small villages: 3 out of 4 have chosen them for their holidays

A trend that also infects foreigners with almost one in ten tourists arriving from abroad in Italy this summer who choose the countryside and farm holidays for the need for freedom, safety and the desire to be outdoors 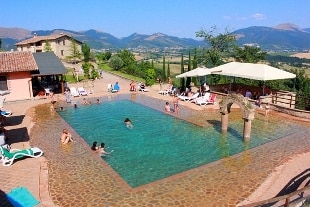 July 18, 2021 Three out of four Italians (75%) who go on vacation will visit one of the almost 5,500 small villages in Italy to combine the desire for tranquility with the possibility of enjoying wider spaces of freedom away from cities or tourist places more crowded. This is what emerges from the Coldiretti-Ixè survey on Italian holidays, which highlights a real turning point in the choice of destinations, also driven by the resumption of infections. The rural areas are chosen both as a real tourist destination as well as as a destination for trips perhaps during bad weather that prevents you from being at the sea. A trend that also infects foreigners with almost one in ten tourists arriving from abroad in Italy this summer who choose the countryside and farm holidays for the need for freedom,safety and desire to be outdoors, according to a Coldiretti analysis on Demoskopica data.

This phenomenon is also favored - continues Coldiretti - by the widespread diffusion of small municipalities which increases the ability to offer an unparalleled natural, landscape, cultural and artistic heritage. In Italy, centers under 5,000 inhabitants host 16.5% of the national population but represent 54% of the entire Italian surface, according to a Coldiretti analysis based on Istat data, with large margins of residential accommodation in a strongly marked landscape - he explains. the Coldiretti - from agricultural productions, from gentle hills combed by vineyards to secular olive trees, from farmhouses in the plains to mountain huts, from green pastures to flowered terraces, which contrast degradation and hydrogeological instability.

But the interest of tourists in small towns is important - continues Coldiretti - also for the search for good food that helps to save a substantial part of the Made in Italy agri-food heritage starting from the 5,266 traditional food products cultivated for generations by farmers who do not they have only an economic but also historical, cultural and environmental value but they guarantee the survival of the population even in the most isolated internal areas. It is no coincidence that 92% of the typical national productions according to the Coldiretti / Symbola survey are born in small Italian villages with less than five thousand inhabitants, a heritage preserved over time by agricultural companies with a daily commitment to ensure the protection of historical agricultural crops,the protection of the territory from hydrogeological instability and the maintenance of food traditions.

Hospitality in small towns is guaranteed above all - Coldiretti points out - by a network of 24,000 agritourism facilities with 253,000 beds and almost 442,000 seats at the table. Farmhouses - underlines Coldiretti - often located in isolated areas of the countryside in family structures with a limited number of beds and at the table and with large open spaces, are perhaps the places where it is easier, in the summer of the covid, to guarantee compliance with security measures to defend against contagion outside the home. "Holidays in small villages, which have always been strongly characterized by the presence of agriculture, represent an example of sustainable tourism that is precious for the country system which, if properly exploited,it can become a strategic resource for economic and employment revival after the crisis caused by the health emergency ", affirms the president of Coldiretti Ettore Prandini.

Never so few Italians abroad, where even Greece is protected: curfew in Mykonos https://t.co/goUM7TtkZR via @repubblica