The flood disaster in western Germany will be part of the election campaign ahead of the German elections this autumn, the disaster will be a test for the parties and their top candidates. Everyone is now visiting the disaster area, everyone is expressing support for the victims and positioning themselves. For the Greens, this is an opportunity to profile themselves on the climate issue. For the CDU's chancellor candidate Armin Laschet, it is now important to show the power of action and the statesmanship expected of a future Chancellor. 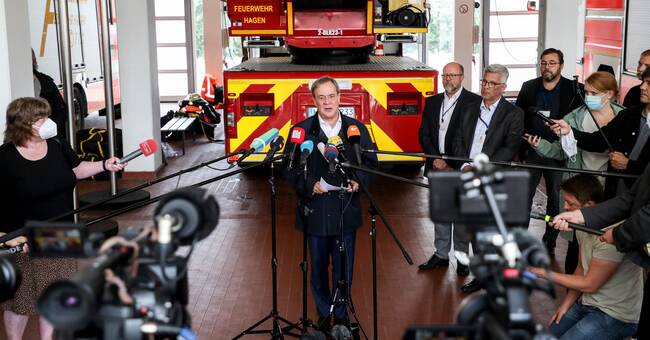 We who have monitored previous election movements in Germany know that flood disasters have affected German elections in the past.

That is why politicians are now so quick to show up in places where the water masses have ravaged.

In August 2002, the eastern parts of Germany were hit, albeit not with as extensive and severe floods as now.

But when the Elbe flooded and devastated the city of Grimma, the Social Democratic chancellor Gerhard Schröder was quick to visit the affected city.

He was seen on TV wading around in rubber boots and talking to locals, he gave comfort and promised quick and unbureaucratic support.

This while his main opponent from Bavaria, the Christian Democrat Edmund Stoiber, delayed his visit.

The competition to be seen

Now we see how today's politicians compete to be in place and to find the right words for support and sympathy for affected people, rescue workers, municipalities and regions.

The Social Democrats' chancellor candidate Olaf Scholz, Minister of Finance in today's coalition, interrupted his holiday and went with the Social Democratic head of state Malu Dreyer in Rhineland-Palatinate already on Thursday to flooded areas.

As Minister of Finance, he spoke of rapid support for affected people and towns.

The Christian Democrats' CDU's new candidate for Chancellor, Armin Laschet, is head of government in the hardest-hit state of North Rhine-Westphalia.

He, too, was quickly on site in the vulnerable areas, met rescue workers and, as head of Germany's largest state, was able to promise quick and practical help to victims.

The Greens' chancellor candidate Annalena Baerbock first spoke only on Twitter, but she also then interrupted her holiday to visit flood-hit places.

Annalena Baerbock was high in the opinion polls for a while and had a honeymoon with the German media, but then she was subjected to reviews where it showed that she did not report her income according to the rules, improved her resume and did not report quotes correctly in a book.

The floods could be an opportunity for the Greens to once again talk about the risks of climate change, the party's heart and main issue before the election.

Balance flow - must not become cynical

For politicians, the floods also mean a balancing act. They must not appear as cynical power players who exploit people's misfortune to gain political points. But the disaster and how German politicians are able to deal with the disaster will be part of the election campaign ahead of the elections to the German Bundestag on 26 September