In Pakistan, at least 13 people, including nine Chinese, died in the explosion of a bus which then poured into a ravine. The vehicle was carrying Chinese personnel working on the construction ... 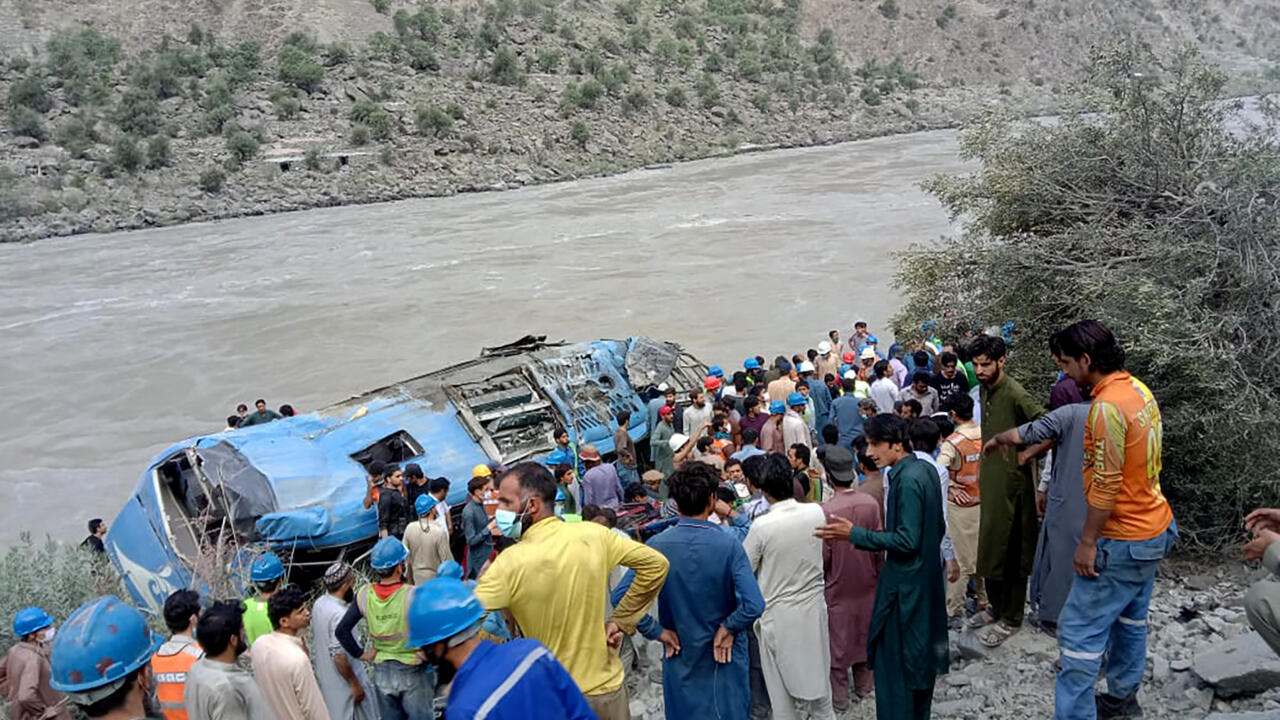 After the explosion, the bus poured into a ravine in Kohistan district of Pakistan's Khyber Pakhtunkhwa province on July 14, 2021. AP

In Pakistan, at least 13 people, including nine Chinese, died in the explosion of a bus which then poured into a ravine.

The vehicle was carrying Chinese personnel working on the construction of a dam.

China denounces an attack and calls for severe punishment of those responsible.

The explosion took place this Wednesday around 7 a.m. local time in the Kohistan district.

The vehicle was carrying around 40 Chinese engineers, surveyors and mechanical maintenance personnel working on the construction of the Dasu hydroelectric dam, in Khyber Pakhtunkhwa province (north-west).

China and Pakistan, two close allies, have separately reported that 13 people, including nine Chinese nationals, were killed. Twenty-eight Chinese were also injured. Interpretations of the event, however, diverge sharply. Pakistan's foreign ministry said in a statement that the bus "

plunged into a ravine after a mechanical incident, which resulted in a gas leak that caused the explosion

." He stressed that an investigation had been opened.

In Beijing, a spokesperson for Chinese diplomacy condemned an "

" the security of the Chinese in the country. The Chinese Embassy in Pakistan also referred to an "

" and called on all Chinese companies in the country to strengthen their security measures.

The safety of Chinese employees working on various infrastructure projects in Pakistan has long been a concern for Beijing, which has invested billions of dollars in the country in recent years.

In April, Tehreek-e-Taliban Pakistan (TTP), the Pakistani Taliban, claimed responsibility for a suicide bombing attack on a luxury hotel in Quetta (west), capital of Balochistan province, where the Chinese ambassador was staying, who had not been injured.

The TTP has also recently claimed responsibility for several smaller attacks in Pakistani tribal areas, in the north-west of the country, on the border with Afghanistan, but also in a few cities, including the capital Islamabad.

The projects funded by China have often created strong resentment in Pakistan especially among separatist groups, who feel that the local population does not benefit from them, with most of the jobs going to Chinese labor.

overlooking the deep-water port of Gwadar, the flagship project of the China-Pakistan Economic Corridor (CPEC), on which Beijing was to spend more than $ 50 billion (€ 42 billion), had been attacked, killing at least eight people.

Six months earlier, an assault on the

, Pakistan's largest city and its economic and financial capital, claimed the lives of at least four people.