China News Service, July 14th. On the 14th local time, a bus exploded in northern Pakistan, killing 13 people, including 9 Chinese citizens, and injuring many others. After the incident, the Chinese Embassy in Pakistan confirmed that the attendance bus for the Dasu Hydropower Project in Cape Province, which was constructed by a Chinese enterprise, suffered an explosion. The Chinese Embassy reque 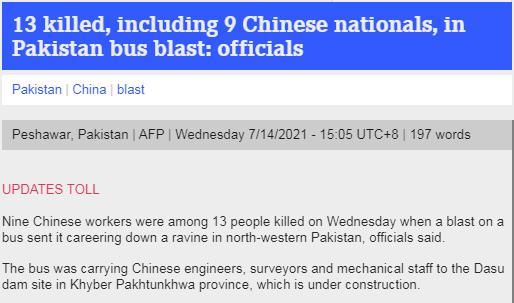 China News Service, July 14th. On the 14th local time, a bus exploded in northern Pakistan, killing 13 people, including 9 Chinese citizens, and injuring many others.

After the incident, the Chinese Embassy in Pakistan confirmed that the attendance bus for the Dasu Hydropower Project in Cape Province, which was constructed by a Chinese enterprise, suffered an explosion. The Chinese Embassy requested Pakistan to carry out full rescue and treatment at all costs.

The Ministry of Foreign Affairs of Pakistan issued a statement on its website saying that the mechanical failure of the shuttle bus caused a gas leak and an explosion, and it is investigating further.

A local government official who asked not to be named told AFP that the explosion caused the bus engine to catch fire and the vehicle fell into the canyon.

A senior local police officer confirmed the incident and said that "this is a serious explosion, but its nature is not yet clear."

Reuters reported that in addition, a Chinese engineer and a soldier were missing.

The highest police officer and inspector general of Khyber Pakhtunkhwa, where the incident occurred, said that two soldiers and two locals were among the victims.

Pakistan said the shuttle bus exploded due to a malfunction, dispatched military aircraft to transport the wounded

After the explosion, the website of the Chinese Embassy in Pakistan released a message confirming that the shuttle bus for the Dasu Hydropower Project in Cape Province, which was built by a Chinese company, suffered an explosion on its way to the construction site.

So far, 9 Chinese personnel and 3 Pakistani personnel have been killed.

Pakistan is investigating the cause.

Screenshot of the website of the Chinese Embassy in Pakistan

The Chinese Embassy in Pakistan launched the emergency plan as soon as possible, contacted the Pakistani military, the Ministry of Foreign Affairs, the Ministry of the Interior and other relevant departments to request Pakistan to carry out rescue and treatment at all costs and strengthen the security of Chinese institutions, projects and personnel in Pakistan , And find out the truth of the incident as soon as possible.

The Pakistani military has organized rescue operations at the first time and dispatched helicopters to transport the wounded.

According to the latest news, the website of the Ministry of Foreign Affairs of Pakistan stated that the vehicle exploded due to a gas leak caused by a mechanical failure and fell into the canyon.

The local government is providing all possible assistance to the injured.

Pakistan’s Ministry of Foreign Affairs stated that Pakistan and China are close friends and “hard-core brothers”.

Pakistan attaches great importance to the safety of Chinese personnel, projects and institutions in Pakistan.

Foreign media also reported that the entire Pakistani government agency has been mobilized, and the military dispatched helicopters to rescue and transport the wounded.

In this regard, Chinese Foreign Ministry spokesperson Zhao Lijian said at a regular press conference on the 14th that China expressed condolences to the Chinese and Pakistani personnel who died in the attack and condolences to their families and injured persons.

Zhao Lijian said that Pakistani security forces have taken measures to control the situation, properly transfer and treat the wounded.

The security situation in some parts of Pakistan attracts attention

Keep these calls for help in mind!

In recent months, there have been several explosions and attacks in Pakistan, and the security situation has aroused concern.

On April 21, local time, the Serena Hotel in Quetta, the capital of Balochistan province in southwestern Pakistan, was hit by an explosion, killing at least 4 people and injuring 12 others.

According to the investigation, the vehicle containing explosives was parked in the hotel parking lot, and the explosion was triggered by an improvised explosive device installed on the vehicle.

Afterwards, the Taliban organization declared responsibility for the incident.

At that time, Pakistani Minister of Interior Sheikh Rashid Ahmed said that the Chinese delegation led by the Chinese Ambassador to Pakistan was about four people staying in this hotel that day, but they had already gone out to participate in activities at the time of the incident.

Ahmed claimed that the incident was part of an "international conspiracy against Pakistan."

He also pointed out that news shows that anti-Pakistan forces have been relatively active recently, and more terrorist attacks may occur in major cities such as Islamabad, Rawalpindi, Peshawar, and Karachi. Related departments have issued warnings on this.

Subsequently, Pakistani Prime Minister Imran Khan strongly condemned the attack on social media and said that Pakistan will continue to combat terrorists and will not allow terrorists to disrupt local peace and development.

On June 23, local time, an explosion occurred in Lahore, the capital of Punjab Province in eastern Pakistan. At least 2 people were killed and 15 others were injured. The injured included police, women and children.

The relevant departments of Punjab Province launched an investigation into the explosion.

On July 7, local time, the Chinese Ministry of Foreign Affairs and the Chinese Consulate General in Karachi issued a security reminder that at present, the security situation in Pakistan's Balochistan province is still very severe, and security incidents occur from time to time.

The Chinese Ministry of Foreign Affairs and the Chinese Consulate General in Karachi remind Chinese citizens not to go to Balochistan for the time being. Chinese citizens and Chinese-funded institutions in Sindh and Balochistan should be vigilant and pay close attention to the announcements by the local government and the embassy in Pakistan. Security information, strengthen prevention and emergency preparedness, and take strict security measures when going out.

In case of emergency, please report to the police and contact the embassy or consulate in Pakistan in time.