Knocked teeth, facial injuries and knee fractures that can lead to lifelong injuries. The emergency department at Sahlgrenska Hospital testifies to many accidents with electric scooters, which in the worst case can have life-threatening consequences. - I do not want any deaths because of this, says chief physician Ragnar Ang. 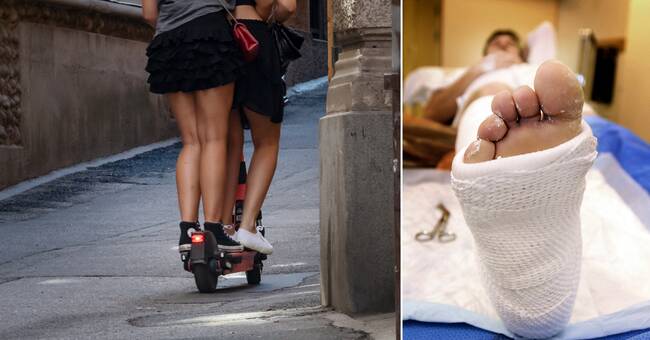 The hospital now fears an increase with more serious accidents this summer.

- The majority are wounds, fractures in the arms and legs, injuries to the face and knocked out teeth.

There are also serious, very serious or even life-threatening conditions, says Ragnar Ang, chief physician at the trauma care unit.

More accidents during the summer

The hospital's concerns ahead of the summer do not seem to be unjustified.

Both in 2019 and 2020, a clear increase was seen in the number of accidents with electric scooters during the warmer months of the year, according to figures from the Swedish Transport Agency's register Strada.

During the first five months of 2019, 86 accidents with electric scooters were reported where someone was injured.

The figure for the corresponding period this year is 169.

Additional cases have probably been reported in recent months as there is a lag in the figures.

There is probably also a dark figure as only accidents that come to the attention of the health service or the police are in the register.

Even at Skåne University Hospital in Malmö, the emergency rooms have had to deal with several electric scooter accidents every week.

Sunny weather means that more people go and then more accidents also occur, according to the hospital.

- Almost no one wears a helmet and those involved in accidents are often under the influence of alcohol.

Not infrequently, there has been more than one person on the electric scooter.

"Do not want any deaths"

From a healthcare perspective, Ragnar Agn had wanted to see a ban on electric scooters to the extent that they are currently rented out, as he believes that the societal cost of the damage outweighs the benefit.

- It is a new risk factor and none of these injuries would have happened if there had not been electric scooters. I do not want any deaths because of this. It is enormously tragic if it were to happen because it is often young people.