The largest street protests in decades in crisis-stricken Cuba

Government-critical protests are raging in Cuba in the wake of the corona pandemic and the island nation's economic problems. On Sunday, thousands of protesters marched in several cities around the country. - It is a serious economic crisis, it can be compared to when the Soviet Union fell, says Cuban expert Thomas Gustafsson. 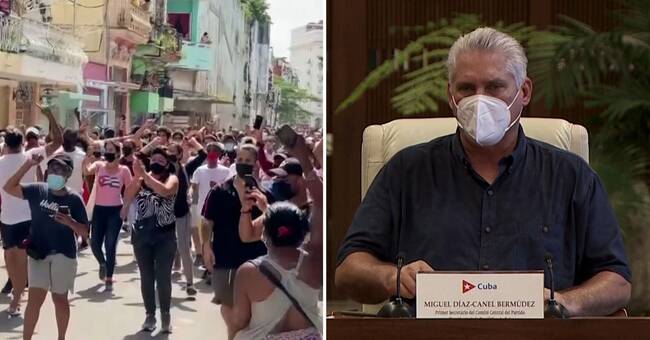 The demonstrations are described as the most extensive since the 1990s.

According to witnesses, several people were arrested by security forces in connection with the protests.

In a televised speech, the country's President Miguel Díaz-Canel, who recently took over from Raúl Castro, stated that the unrest is due to the sanctions that the United States is imposing on the country.

He also called on party loyalists to hold counter-demonstrations.

Dissatisfaction is, among other things, about food and electricity shortages.

Thomas Gustafsson, independent Cuban expert and author, points out that the country went through a very difficult time during the corona pandemic - the economic consequences have been devastating.

Revenues from tourism and money sent from Cubans in exile have been snatched away.

At the same time, US economic sanctions have become increasingly tangible.

The acute crisis became an igniting spark for the protests that flared up, says Thomas Gustafsson.

- It is a serious economic crisis, it can be compared with when the Soviet Union fell.

They have isolated themselves, kept the infection down and managed to develop their own vaccine.

But now the infection is spreading and people have no income, it is very scarce, says Thomas Gustafsson.

In addition, a comprehensive currency reform has led to higher prices for the population.

- Especially in the young generation, there is a great deal of frustration and hopelessness, the pandemic is just the tip of the iceberg in the crisis that Cuba has fallen into. It is very complicated for the regime to solve the economic problems.

The regime has taken control of this now, but a big problem is how to survive in the future.