Algeria: France refuses to hand over the maps of its nuclear explosions in the country

Algeria's Minister of Mujahideen, Tayeb Zitouni, said - Sunday - that France refuses to hand over to his country the maps of nuclear explosions it conducted in its desert during the 1960s. 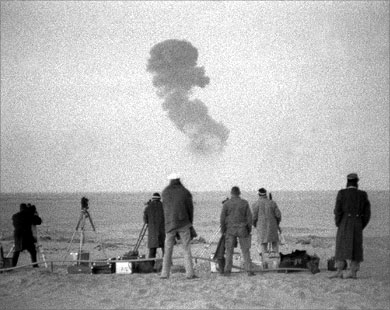 Algeria's Minister of Mujahideen, Tayeb Zitouni, said - Sunday - that France refuses to hand over to his country the maps of nuclear explosions it conducted in its desert during the 1960s.

This came in an interview conducted by the official Algerian News Agency with the minister on the occasion of the 59th anniversary of the country's independence from France, on July 5, 1962.

The French colonial authorities conducted a series of nuclear tests in the Algerian desert, including 4 above ground and 13 underground, between 1960-1966, according to historians.

Zitouni stated that the French side refuses to hand over topographic maps that may allow the identification of burial areas for radioactive or chemical polluting waste that have not been discovered until today.

He added, "France also did not take any initiative to clean up the contaminated sites from a technical point of view or with the slightest humanitarian action to compensate those affected."

He said, "The colonial nuclear explosions are irrefutable evidence of the crimes committed, the radiation of which continues to affect humans, the environment and the ocean."

The file of the French nuclear explosions remained the subject of official Algerian demands and other civil organizations, in order to reveal the locations of nuclear waste and to compensate its victims and those affected by radiation.

While Algeria says that what happened are nuclear explosions, France considers that they are just nuclear tests.

Algerian President Abdelmadjid Tebboune addressed this problem in an interview with the French newspaper Le Point, in early June.

"We ask France to clean up the nuclear test sites, and we hope that it will address the file of its victims," ​​Tebboune said.

The French colonization of Algeria lasted between 1830 and 1962, and the Algerian authorities and historians say that this period “was witnessed killings against nearly 5 million people, in addition to campaigns of displacement and looting of wealth.”​