New York Times, Reuters and BBC. Some international media have drawn attention to the mass closure of Coop's stores after the devastating hacker attack on Friday. 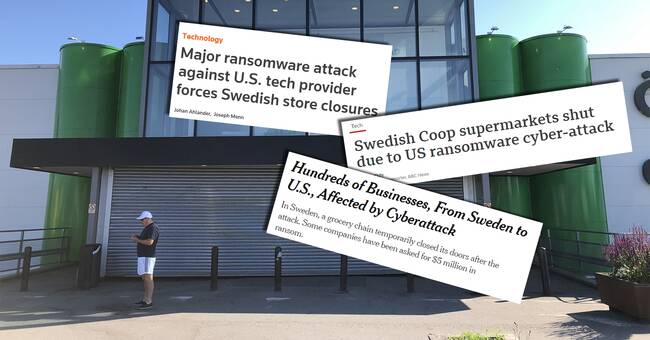 It started in the United States when the software company Kaseya was subjected to a cyber attack.

Now Coop is instead the story in the US - New York Times and Reuters are two American sites where they report on the accident that forced the food giant to stores in almost all of Sweden.

Hundreds of businesses, from Sweden to the US, affected by cyberattack,

" reads the headline in the long-running New York Times.

The British The Guardian and the public service company BBC also report: "

Swedish Coop supermarkets shut due to US ransomware cyber-attack

The mass closure of Coop's stores has also become news in France, New Zealand and Norway, among others.

A number of Coop stores are open on Sunday, but the majority have still been forced to close.

- An intensive work is going on and it will continue throughout the day really.

But it looks like most of our stores will be closed.

"Unfortunately, I do not have an exact figure on how many or where they are," Kevin Bell, press secretary for Coop, told SVT Nyheter on Sunday morning.

The IT attack has also reached politicians - among other things, US President Joe Biden has ordered an investigation while Defense Minister Peter Hultqvist (S) urges the business community to stay up to date when it comes to security work.

- We have worked with this since we took office seven years ago and within the state authority sphere, we are constantly working to develop our own IT security.

But it is also the case that together with the business community, IT security is developed and that the state here is an active party to help and develop security but also stimulate so that they really work with these issues, Peter Hultqvist said yesterday.