Mubarak meets Saddam to prevent the invasion of Kuwait.. the last visit of an Egyptian president to Iraq before Sisi

After decades of absence, President Abdel Fattah El-Sisi's visit to Iraq came yesterday, Sunday, as the first visit by an Egyptian president in more than 30 years, specifically since the visit of the late President Mohamed Hosni Mubarak to Baghdad in July 1990. 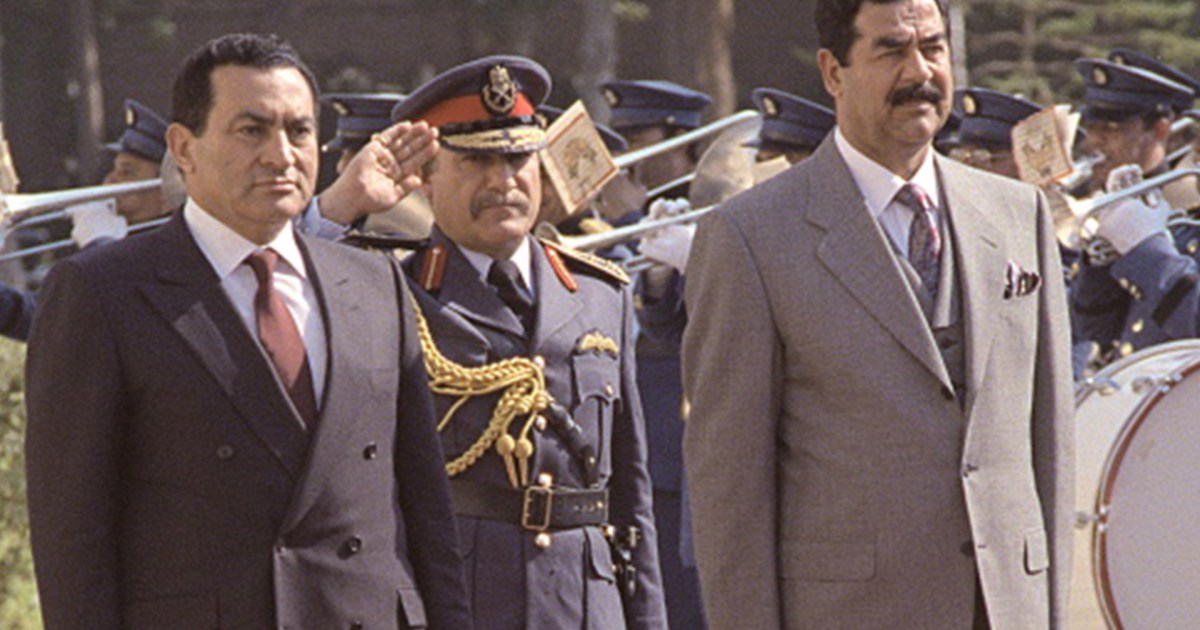 After decades of absence, President Abdel Fattah El-Sisi's visit to Iraq came yesterday, Sunday, as the first visit by an Egyptian president in more than 30 years, specifically since the visit of the late President Mohamed Hosni Mubarak to Baghdad on July 24, 1990.

Al-Sisi participated in the tripartite summit between Egypt, Iraq and Jordan, with Iraqi Prime Minister Mustafa Al-Kazemi and King Abdullah II of Jordan, which is the fourth round of the tripartite cooperation mechanism that was launched in Cairo in March 2019.

According to the official spokesman for the Egyptian presidency, Bassam Rady, the summit discussed ways to enhance joint cooperation in various fields between the three countries, and intensify coordination on the latest political developments in the region.

# Sisi is on a visit to Baghdad after 30 years of interruption of the visits of the presidents of # Egypt to # Iraq.. a tripartite summit with the participation of # Jordan to discuss relations and common challenges pic.twitter.com/tdz6lbP1zq

At 8:30 in the morning of July 24, 1990, Mubarak went to Baghdad against the background of information about the Iraqi army's build-up on the Kuwaiti border, according to what the Egyptian president said in a press conference later about that visit.

Mubarak told the details of the visit on more than one occasion, and said in televised statements that it had begun with confirmed information at the time that Iraq had mobilized forces on the borders, and their size and position did not seem to be defensive forces, so he decided to visit Baghdad to calm matters.

He said that at the time he met Saudi Foreign Minister Saud al-Faisal, an envoy of King Fahd bin Abdulaziz, for an hour at Cairo airport, and then traveled to Iraq for five hours with President Saddam Hussein and his foreign minister, Tariq Aziz, and most of the meeting was an Iraqi complaint from Kuwait, but Mubarak asked Saddam to solve the problems Through dialogue, as he described it.

According to his account, Mubarak asked Saddam specifically and more than once about his intentions towards Kuwait, as he assured him more than once that he did not intend to attack Kuwait, but he asked Mubarak not to tell the Kuwaiti leadership about that.

Mubarak said that he asked Saddam to hold a meeting between Iraq and Kuwait, and suggested that it take place on Sunday, July 29 in Saudi Arabia, and Saddam actually agreed. However, on his way to Kuwait, he was surprised by a press statement from Tariq Aziz saying that Mubarak's meeting with Saddam dealt with bilateral relations between the two countries, which It angered the Egyptian president.

According to Mubarak's statements, he conveyed to the Emir of Kuwait (at the time) Sheikh Jaber Al-Sabah, Saddam's assertion not to take any military action, but he also asked him to take the necessary precautions "because Saddam is elusive" and confirmed his readiness to send any defense aid requested by Kuwait, according to his expression.

From Kuwait, Mubarak traveled to Saudi Arabia, and he met King Fahd and his Crown Prince at the time, Prince Abdullah, and agreed with them to invite a meeting that includes Iraqis and Kuwaitis in the Kingdom. Indeed, Prince Abdullah called for a meeting in Jeddah on Sunday, July 29, but the Iraqi delegation decided to attend two days later. That is, Tuesday.

The Kuwaiti delegation was headed by Sheikh Saad Al-Sabah, while Azza Ibrahim Al-Douri was at the head of the Iraqi delegation, and the two delegations met on Tuesday evening and Wednesday afternoon, but according to Mubarak’s account, the Iraqi delegation did not have any real mandate to negotiate to resolve the dispute, and the meetings ended without agreement, and the Iraqi delegation performed rituals Umrah, before returning to his country at dawn on Thursday, and immediately after the Iraqi forces invaded Kuwait.

According to the account of Mustafa al-Fiqi, Mubarak's secretary for information, calls continued to him from Kuwaiti officials, at dawn on the day of the invasion, August 2, 1990, and they asked him to inform the president of Iraq's occupation of Kuwait. He, in turn, called the director of the president's office, who woke him up and informed him of the news.

Al-Fiqi confirmed that the president did not imagine Saddam invaded Kuwait, and that when he heard the news of the invasion, he imagined that Saddam had occupied the Rumaila oil field shared between Iraq and Kuwait, but he had occupied the entire country.

At the end of the same month, Baghdad announced the administrative division of Kuwait, and made Kuwait City and its surrounding areas the 19th governorate in Iraq.

The UN Security Council at that time gave Iraq an opportunity to withdraw from Kuwait, but Saddam refused to respond to international, Arab and international calls and initiatives, which paved the way for an international coalition led by the United States to launch a war to expel Iraqi forces from Kuwait on January 17, 1991, and succeeded in achieving this Then US President George HW Bush announced the liberation of Kuwait on February 27, 1991.