"Creation of hotbeds of tension": in the Black Sea began the exercises of the US Navy and Ukraine Sea Breeze 2021

In the Black Sea, the Sea Breeze 2021 naval maneuvers started with the participation of the United States and Ukraine. They will involve 32 warships, 40 aircraft and 5,000 servicemen from 17 NATO member countries, as well as alliance partners. In total, representatives from 32 countries are expected to participate. The Russian Defense Ministry said that the Black Sea Fleet controls the actions of the Western naval forces. Earlier, the Russian defense department and the Foreign Ministry noted that the exercises are provocative in nature and will be used to provide Kiev with weapons. The anti-Russian nature of the Sea Breeze 2021 maneuvers does not raise doubts among military experts and political scientists. 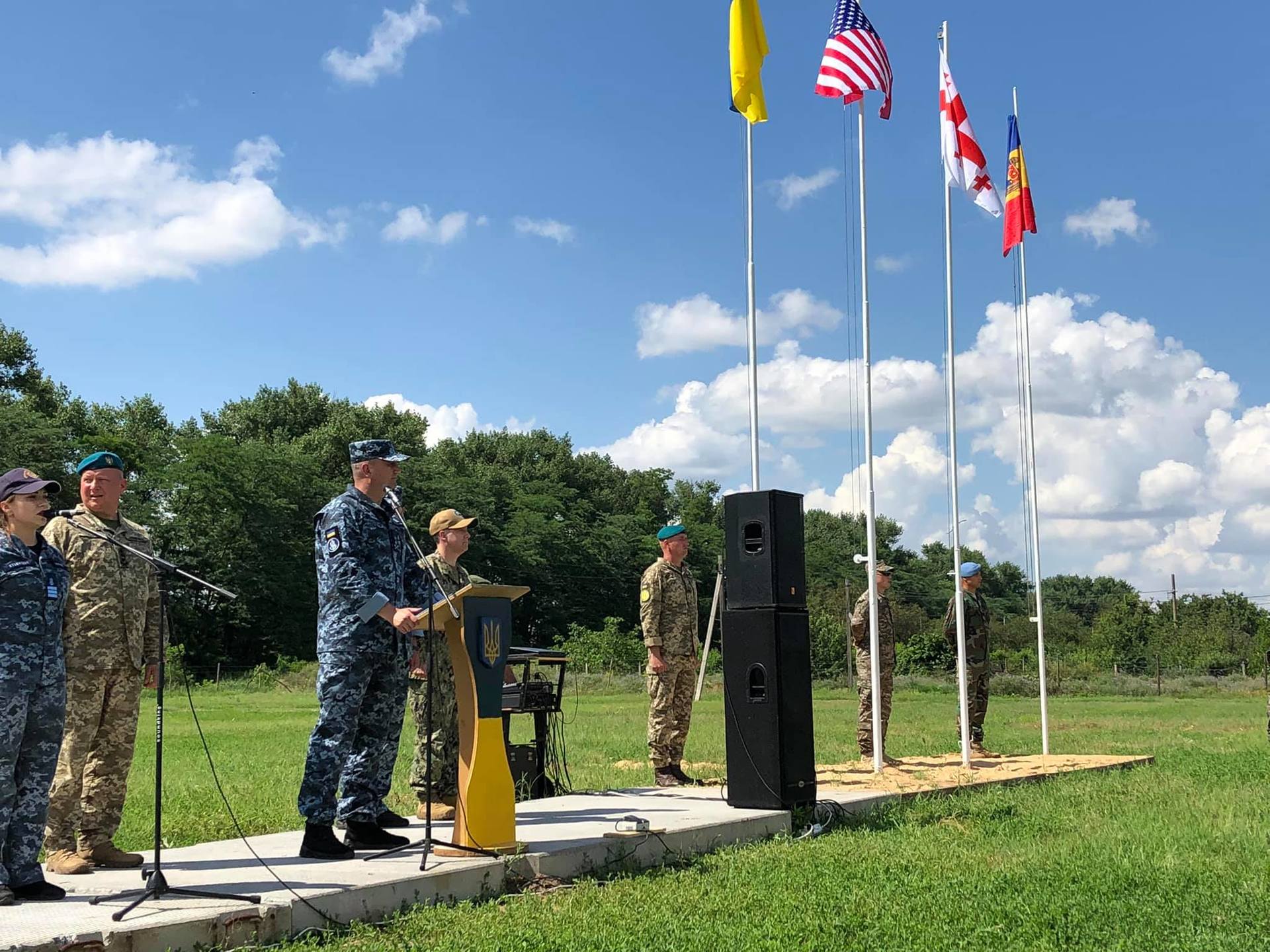 In the Black Sea, the joint US and Ukrainian naval exercises Sea Breeze ("Sea Breeze") 2021 began, the Ukrainian Navy reported.

Earlier, the US Navy was informed that the maneuvers will take place from June 28 to July 10 and will focus on a number of aspects, including "amphibious assault, ground maneuvers, diving operations, pre-emptive naval operations, air defense, integration of special operations, anti-submarine defense and search and rescue operations ".

"This year, a record number of states are taking part in the exercises - 32 countries from six continents, which will provide five thousand military personnel, 32 ships, 40 aircraft and 18 diving teams and special operations groups," - said in a statement on the official website of the US Navy ...

The joint US-Ukrainian exercise in the Black Sea was commented on by Christina Queen, Charge d'Affaires of the US Embassy in Kiev.

“The United States is proud to join forces with Ukraine to jointly organize the Sea Breeze International Maritime Exercise, which will help improve interoperability and empower member countries.

We are committed to maintaining security in the Black Sea, ”said the American diplomat.

The National Defense Control Center of the Russian Defense Ministry said that the Black Sea Fleet controls the actions of NATO ships participating in the Sea Breeze.

"The forces and means of the Black Sea Fleet are carrying out a set of measures to control the actions of the ships of the NATO and other countries participating in the Sea Breeze 2021 exercise, which started on June 28, 2021 in the northwestern part of the Black Sea," the Russian military noted.

The US is represented in the exercise by the 6th Fleet of the Navy, stationed in the Mediterranean Sea.

Its area of ​​responsibility includes Europe and Africa.

In the statement of the 6th Fleet about participation in Sea Breeze 2021, it was noted that some "aggressive subjects" are operating in the Black Sea.

“The Black Sea is an important artery for maritime trade and stability in Europe.

The US Navy regularly conducts operations in the Black Sea in cooperation with Bulgaria, Georgia, Romania, Turkey, Ukraine, as well as other NATO allies and partners.

Maintaining stability and prosperity in the Black Sea region and restraining aggressive actors seeking destabilization for their own benefit is in the interests of the whole world, ”the 6th Fleet said in a statement.

On June 26, in preparation for the exercises, the American missile destroyer USS Ross entered the Black Sea.

It can carry up to 56 Tomahawk cruise missiles with a range of 1.6 thousand km.

“The participation of the destroyer USS Ross in the Sea Breeze exercise this year is a vivid and more relevant example of the fact that the United States is supporting Ukraine.

This is part of the long-term commitment made by the United States, NATO allies and our partners in 1997 to strengthen security in the Black Sea, ”the diplomat emphasized.

It is worth noting that the US Navy ships cannot be permanently in the Black Sea, in accordance with the provisions of the Montreux Convention on the Status of the Bosporus and Dardanelles.

In accordance with the convention, the stay of warships of the non-Black Sea powers in the Black Sea is limited to 21 days.

In addition, the total tonnage of warships of non-Black Sea countries located in the Black Sea is also limited: it should not exceed 30 thousand tons.

Recall that the Sea Breeze exercises have been carried out since 1997 in the Black Sea and on the territory of Ukraine.

The key participants in the maneuvers are the United States and Ukraine, and NATO member countries and alliance partners are also involved in the exercises.

The joint exercises of the United States and Ukraine in the Black Sea were commented on in Russia.

Thus, the official representative of the Russian Ministry of Defense, Igor Konashenkov, said in early June that the military would closely follow their preparation and implementation and, if necessary, would "respond adequately to the evolving situation in the interests of ensuring the military security of the Russian Federation."

Konashenkov also noted that the exercises will take place "against the backdrop of incessant accusations from Western countries that Russia is allegedly building up its military potential in the southwestern borders."

In addition, an official representative of the Russian Ministry of Defense said that weapons would be delivered to Ukrainian troops stationed near non-Kiev-controlled areas in the Donetsk and Luhansk regions under the cover of the exercises.

“It is there, under the cover of the exercise, that it is planned to deliver modern weapons, ammunition and material property for the Ukrainian troops,” the general said.

“In the future, as in previous years, all this will be directed to the Ukrainian troops and nationalist formations stationed near the districts not controlled by Kiev in the Donetsk and Luhansk regions.”

In turn, the Russian Foreign Ministry regarded the exercises as provocative.

This was stated by the official representative of the department Maria Zakharova.

“These are provocative actions ... For some reason, our Western partners are very nervous react to the exercises and maneuvers that our country is conducting.

She always accompanied them, she conducts them now, we notify them in advance.

We do it with our partners, on the territory of our country ... but as soon as we start to carry them out, hysteria begins in the West.

At the same time, when they ... NATO countries conduct exercises directly close to our borders, for some reason they do not consider it necessary to express any concerns and consider it an absolute norm, "Zakharova said on the Russia 24 TV channel.

The Russian diplomat also stressed that the joint maneuvers would become a pretext for the transfer of arms to Kiev from Washington.

“As a result of these exercises, part of the weapons is deposited in Ukraine and used, we have great confidence in this, directly in the conflict in Donbass.

There is a very important point: the budget that the United States spends on arming Ukraine, and this is not a solution to Ukraine's problems, but the pumping of weapons ... Since 2014, according to official statistics, about $ 2 billion has been poured into it, ”Zakharova said.

In an interview with RT, Doctor of Military Sciences, retired captain of the 1st rank Konstantin Sivkov noted that the anti-Russian orientation of these exercises is beyond doubt.

And the only task that the United States, NATO, Ukraine and Great Britain can work out is military action against Russia, "the interlocutor of RT emphasized.

However, Russia is closely monitoring the region and is preparing for possible provocations, said Konstantin Sivkov.

"The RF Ministry of Defense has already deployed a strike aviation grouping in the Mediterranean to combat aircraft carrier formations, as well as an aviation group consisting of a certain number of MiG-31K aircraft with the Kinzhal and Tu-22M3 missile systems," the military expert said.

According to Sergei Sudakov, Corresponding Member of the Academy of Military Sciences, the Sea Breeze 2021 exercise is one of the parts of NATO's strategy to "create hotbeds of tension around the borders of the Russian Federation and increase instability in the region."

“In this case, Maria Zakharova is right, because after the exercises, the transferred military forces and equipment will remain, no one will be able to control it, because there are no regulated deadlines when weapons must be transferred back to the United States.

Undoubtedly, this can lead to further escalation and the growth of all kinds of provocations, "Sudakov said in an interview with RT.

At the same time, the United States does not want to invest too much money in Ukraine and create a large foothold on its territory, the expert said.

“Washington is well aware that they need to support hotbeds of tension around Russia with small means. The transfer of its formations to the Black Sea to the borders of Ukraine is an acceptable price for this project and a fake demonstration of US support for Ukraine, ”concluded Sergei Sudakov.