The U.S. vaccination target may be difficult to achieve the delta strain spreading, causing a multi-country outbreak to rebound

(Fighting against New Coronary Pneumonia) U.S. vaccination targets may be difficult to achieve the spread of Delta strain, causing a rebound in the epidemic in many countries   China News Service, Beijing, June 20. Comprehensive news: According to the latest statistics from Johns Hopkins University in the United States, as of 9:21 on the 20th, Beijing time, there were a total of 178,119,063 con 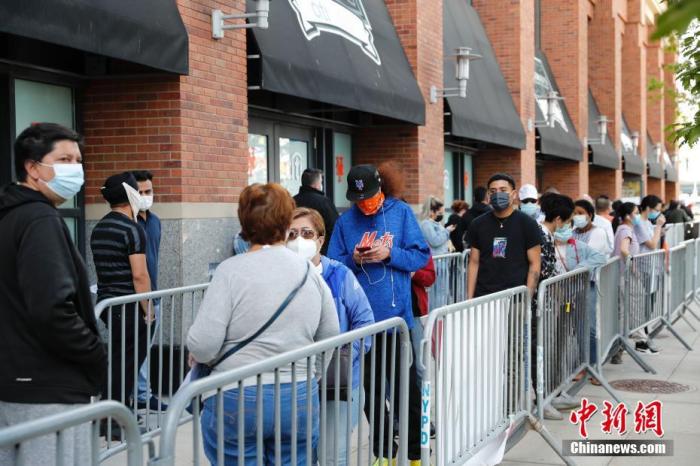 (Fighting against New Coronary Pneumonia) U.S. vaccination targets may be difficult to achieve the spread of Delta strain, causing a rebound in the epidemic in many countries

China News Service, Beijing, June 20. Comprehensive news: According to the latest statistics from Johns Hopkins University in the United States, as of 9:21 on the 20th, Beijing time, there were a total of 178,119,063 confirmed cases of new crowns worldwide, and a total of 3,857,660 deaths.

Americas: U.S. vaccination goals may be difficult to achieve

According to the latest data released by Johns Hopkins University, the United States has a total of 33,536,687 confirmed cases and a total of 601,720 deaths.

On the 18th local time, US President Biden announced that within 150 days of his inauguration, the United States had completed 300 million doses of new crown vaccination, and he called on the public to continue vaccinating.

Biden previously proposed that 70% of American adults should receive at least one dose of the vaccine before July 4.

However, according to Reuters, only two weeks before July 4th, about 65.1% of American adults have received at least one dose of the vaccine, and 55% of adults have completed the vaccination.

According to data released by the US Centers for Disease Control and Prevention on the 8th of this month, about 63.8% of American adults have received at least one dose of the vaccine, and 53.1% of adults have completed the vaccination.

For more than ten days, little progress has been made in vaccination in the United States.

"Washington Post" pointed out that Biden's vaccination target may not be achieved until the summer.

At present, the average 7-day vaccination dose in the United States is about 1.1 million doses, which is much lower than the 3.3 million doses per day during the peak period.

At the same time, there are significant differences in vaccination progress between states in the United States, with lower vaccination rates in the southern and midwestern regions.

People's doubts about vaccines and the improvement of the epidemic have caused people to relax their vigilance, and other reasons have made it difficult for the above-mentioned areas to meet the standards.

The Center for Disease Control and Prevention under the Ministry of Health of Peru reported on the 18th that since the peak of the second wave of epidemics reported in the fourth week of March 2021, the number of new confirmed cases in Peru has decreased by 78%.

Peruvian experts explained that the country's second wave of epidemics began at the end of December 2020 and reached a peak at the end of March 2021. Subsequently, the number of new cases decreased by an average of 13% every week.

However, the degree of reduction in new cases varies in different regions of Peru.

This is caused by different factors. For example, the government implements different prevention and control measures according to the risk level of the epidemic in each region.

Europe: Delta Strain Spreads and Rebounds Epidemic in Many Countries

It is reported that the surge in cases in Moscow is mainly due to the continuous spread of the delta strain first reported by India.

Moscow Mayor Sergey Sobyanin said that cases infected with the delta strain accounted for nearly 90% of the newly confirmed cases.

In response to the rebound of the epidemic, Moscow has re-implemented a series of anti-epidemic restrictions, including banning large-scale public events and closing cafes and restaurants at night.

Sobyanin has ordered the compulsory vaccination of the new crown vaccine for people working in Moscow's service industry.

In the UK, more than 90% of newly confirmed cases are infected with the Delta strain.

The British government originally planned to lift all remaining social restrictions in England on the 21st, but this week announced that in view of the rapid spread of the delta strain in the UK, the above-mentioned final stage of "unblocking" date was postponed by 4 weeks to July 19th.

According to the latest data released by the Robert Koch Institute of the German government's disease control agency, as of the week of June 6, 6.2% of newly confirmed cases in Germany were infected with the Delta strain, compared with 3.7% in the previous week.

The director of the Institute, Lothar Weiler, believes that the more infectious Delta strain will become the mainstream strain in Germany by this fall.

The German Minister of Health, Spane, held the same view. He said: "The question is not whether the delta strain will become a mainstream strain in Germany... but when and under what circumstances (becoming a mainstream strain), it is best to have a high vaccination rate. , When the number of new infections is small."

Asia: Japan will decide whether to allow spectators to watch the Olympics live

With just over a month left before the opening of the Tokyo Olympics on July 23, the Japanese government is continuing to advance relevant preparations.

The governor of Tokyo, Japan, Yuriko Koike, said on the 19th that during the Olympics and Paralympics, off-site live broadcast public watching activities originally planned in Tokyo will be cancelled, and part of the venue will be used for COVID-19 vaccination.

Koike Yuriko said that in order to successfully host the Olympic and Paralympic Games, "this is a necessary countermeasure."

Starting on the 18th, Tokyo began to vaccinate the staff of the Olympic and Paralympic Games against the new crown.

It is now planned to vaccinate about 2,500 people every day by the end of August, including Olympic volunteers, staff in the Olympic village and competition venues, media workers and medical workers.

The Japanese government previously announced that in areas that are not in a state of emergency or quasi-emergency, up to 10,000 people will be allowed to participate in large-scale events on the spot, but it has not yet decided whether to allow local audiences to watch the Olympics.

According to a report from the Ministry of Health of Mongolia on the 19th, there were 2,635 newly confirmed cases in the country in a single day, and the total number of confirmed cases exceeded 90,000.

The country’s increasing number of confirmed cases set a record for 9 consecutive days, and there was a slight decline for the first time on the 19th.

The country’s capital, Ulaanbaatar, has the worst epidemic situation, with a total of 75,721 confirmed cases. The epidemic continues to spread rapidly in other regions.

As of that day, about 1.91 million people in Mongolia had received at least one dose of the new crown vaccine.

On the evening of the 18th local time, Ugandan President Museveni announced that in response to the current new crown epidemic, the blockade measures against the epidemic will be fully upgraded from 10 o'clock that night for a period of 42 days.

These measures include: the start of the daily curfew is advanced by two hours; trade markets and shopping malls are closed; non-core government departments and agencies' working staff are reduced to 10%, etc.

Museveni said that Uganda is facing an "unprecedented" epidemic. In the past three weeks, the number of daily infections has increased by 17 times, and the positive rate of the new coronavirus test is as high as 17%.

As of the 16th, the areas with rapid spread of the epidemic have expanded from 61 three weeks ago to 108, and the medical system is overwhelmed.