In the future, a significant share of small-sized cargo transportation in Russia will be carried out by means of rotary-wing unmanned aerial vehicles. With such a forecast in an interview with RT, the CEO of the Aviation Auxiliary Systems (ABC) company Alexander Kurnikov spoke. This company, together with the IT-enterprise Aeromax, creates multifunctional intelligent unmanned platforms under the SmartHeli brand. Now in the line of domestic developers there are three main families of helicopter-type UAVs: SH-350, SH-450 and SH-550, differing in carrying capacity and flight duration. Kournikov notes that while the development of this service sector is restrained by some norms of Russian legislation. However, the specialist expects that in the coming years, most of the legal restrictions for the formation of the market for unmanned transport will be adjusted. 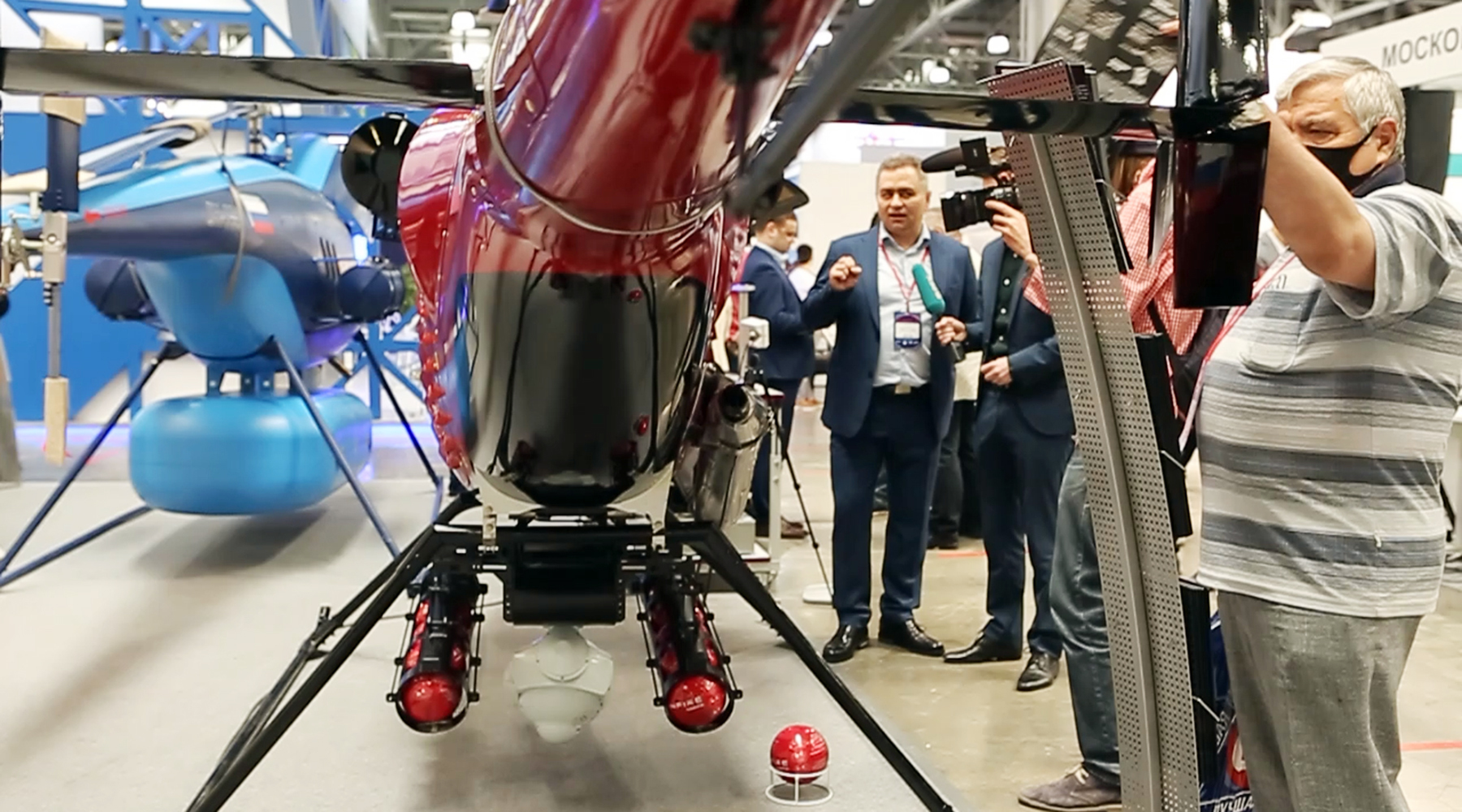 SmartHeli (SH) is a new brand on the market of civilian helicopter-type drones.

Are you working independently or collaborating with someone?

- We are indeed a new player in the civilian rotorcraft unmanned platforms market, although some of our vehicles are already being successfully operated.

Our mission is to create affordable intelligent unmanned aircraft systems for a wide variety of needs and industries.

First of all, we are talking about logistics, search and rescue activities, environmental monitoring, agriculture, geodesy and cartography, construction, oil and gas sector and telecommunications.

ABC works in cooperation with leading research institutes, design bureaus and production sites in Russia, and our key partner is Aeromax, which specializes in the development of integrated IT solutions for various business areas.

Aeromax is one of the leaders in the development of civil unmanned projects and digital geographic information platforms, and together we plan to conquer not only the Russian market, but also achieve significant success internationally.

Actually, all these devices are installed on SmartHeli platforms.

- What UAV projects have you already implemented?

- At the HeliRussia-2021 international exhibition recently held at Crocus Expo, ABC and Aeromax presented three models of unmanned aerial vehicles, which are the product of our close cooperation.

The demonstrated UAVs can stay in the air for several hours, cover hundreds of kilometers and transport tens of kilograms of payload.

Artificial intelligence technologies are integrated into the SmartHeli control system, thanks to which autonomous flight, "independent" orientation on the ground and flying around various obstacles are carried out.

Vision software plays an important role in this context.

At the exhibition we showed one of the modifications of the SH-350 family - this is our first brainchild with Aeromax.

) and successfully tested in the Arctic during ice exploration.

This machine has a multispectral optical-electronic system that allows you to "see" any objects in the monotonous polar space.

Depending on the wishes of the customer and the specifics of the tasks set, SH-350 are equipped with various optoelectronic systems capable of operating in the television, thermal imaging and infrared ranges.

Once again, I emphasize that a whole family of unmanned systems for various tasks has been built on the basis of the SH-350.

For example, the basic version is designed for monitoring ice conditions, the SH-350G modification - for geophysical research, the SH-350R - for search and rescue missions, and so on.

Of course, we did not stop and developed a more lifting device SmartHeli-450 with a takeoff weight of 450 kg.

The speed characteristics of the device are the same, but there is more fuel (140 liters) and the duration of the flight (up to 6 hours).

Its flight tests are currently underway.

SH-450 will also form the basis of a whole line of unmanned systems for various tasks.

The most promising our development today is the SH-550 model.

This is a larger machine with higher performance than its predecessors.

A more powerful power unit and a voluminous fuel tank made it possible to increase the flight duration of the SH-550 to 7.5 hours and raise the dynamic ceiling to 4000 m.

And what components do you purchase from third-party organizations, do you have a lot of imported systems and units?

- In products of the SmartHeli brand, up to 90% of components are domestically produced.

This is almost all onboard equipment, screw mechanisms, composites, from which the body is made.

Unfortunately, Russia does not yet have a line of specialized engines for different types of UAVs.

Therefore, we have to redesign the power units available on the market.

Also in Russia there is virtually no own civil electronic component base.

More precisely, it exists, but in terms of technical characteristics, domestic microelectronics is often inferior to foreign counterparts.

There is nothing you can do about it, but we, for example, make boards ourselves and adapt other purchased components.

- What are the operational limitations of SmartHeli models?

“In fact, our unmanned rotorcraft can be used in altitude ranges from 50 m and beyond to the dynamic ceiling.

They can be used at any time of the day and in almost any weather conditions.

For takeoff and landing of our drones, a specially equipped runway is not required, a relatively flat area of ​​10 by 10 meters is sufficient, and this significantly expands the possibilities of using our aviation unmanned systems.

The existing experience in the use of civilian unmanned platforms, including a helicopter type, allows us to conclude that the operation of this class of aircraft in many areas is more expedient than lifting manned aircraft into the air.

Modern UAVs are much more efficient and, which is very important, cheaper when solving most modern tasks at relatively short distances.

In the near future, we predict a rapid growth in the market for cargo transportation by unmanned platforms.

This trend is already observed in foreign countries and will certainly capture our country.

With regard to the Russian Federation, we proceed from the assumption that the Russian Post, delivery services and private transport companies will not fly small aircraft or use road transport when fast transportation of goods within a few tens of kilograms is required.

Taking into account the realities of the Russian infrastructure, it is not always possible to get to the delivery point by car, and constantly driving An-2, Mi-8 or other manned transport is inexpedient from an economic point of view.

According to our calculations, SmartHeli can deliver goods within a few hundred kilometers without significant costs.

We propose to transport, relatively speaking, from 20 to 100 kg of cargo "here and now" without the need for a long wait until a decent consignment of cargo is assembled to be sent on a "big board".

From our point of view, this format is relevant for the transportation of a wide range of consumer goods, food products, medicines and biomaterials.

According to our forecasts, delivery services by helicopter-type drones will be in demand not only in sparsely populated areas, but also in large cities, including Moscow and the Moscow region.

It is still difficult to say how this market will be organized.

We have our own flight test complex, and already now we offer the services of a UAV operator who can simultaneously perform maintenance and repair of the device.

I am sure that leasing will actively develop in the future.

Therefore, many Russian organizations are interested in SmartHeli machines.

There is also interest from foreign countries, where they understand the prospects of using unmanned aerial systems.

- Perhaps you are right, but why do we not observe in our country, where settlements are often in transport isolation, the use of unmanned cargo platforms?

- The main obstacle to the development of such a market is the current Russian legislation, which does not regulate the functioning of the cargo transportation sector using UAVs.

Now it is quite easy to register a drone with a takeoff weight of up to 30 kg, but with heavier vehicles, a huge number of problems already arise, including criminal liability.

However, we and our partners are seeing certain positive shifts in this area.

I can say with confidence that the leadership of sectoral government departments understands the importance of developing the civilian drones segment.

As evidence of this, we consider the expansion of the practice of creating zones of an experimental legal regime, where the launch of UAVs is allowed in a simplified manner.

In particular, one of these zones operates in the Tomsk region.

In the near future, they should appear in other regions of the country, including the capital.

What are we counting on?

The market for unmanned vehicles in Russia will definitely be formed - this is an inevitable reality.

And by the time the Russian legislation is updated, ABC and Aeromax will be able to offer potential operators all the necessary line of unmanned aerial vehicles.