Raid on the pro-democracy press in Hong Kong 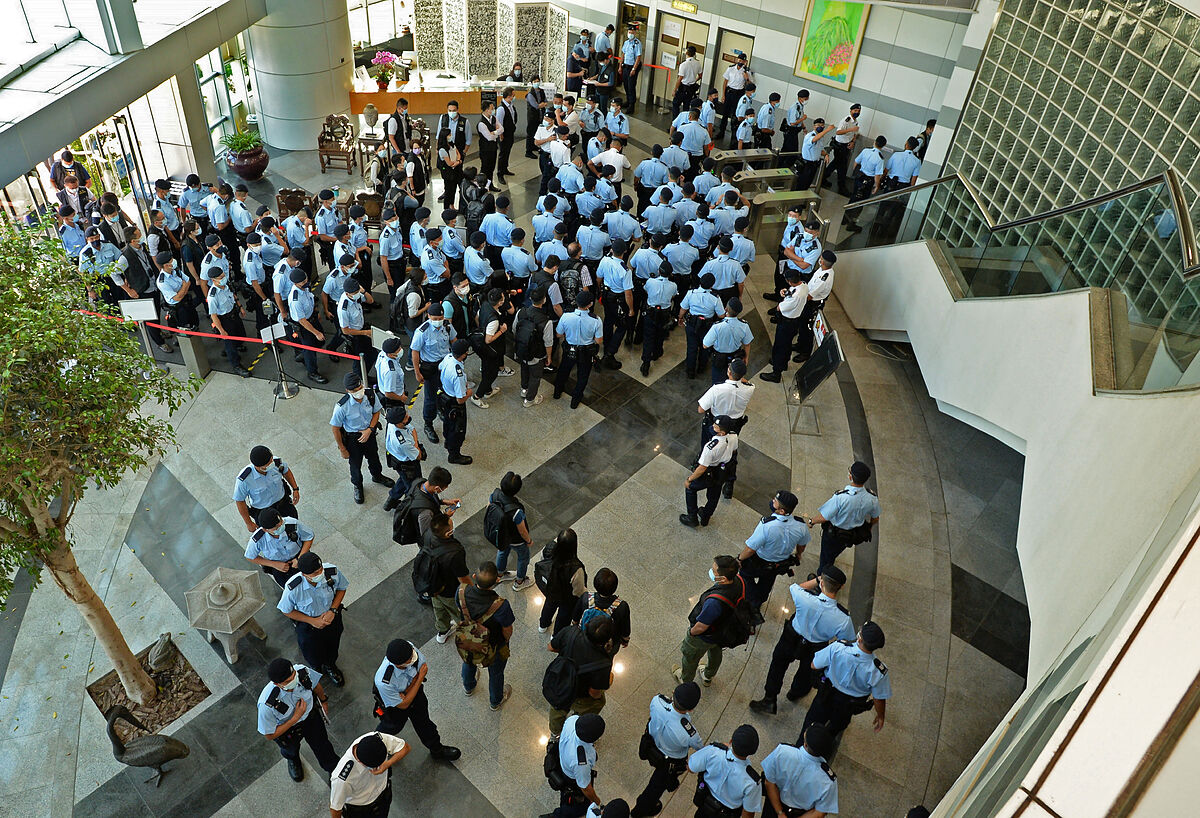 The Hong Kong police raid on the office of the newspaper

A hundred agents entering the newsroom,

searching drawers and looking for information on

while the employees were taken to the basement of the building to stop recording.

The 'Apple Daily' is the largest pro-democracy daily in Hong Kong.

When the newspaper's owner, Jimmy Lai, was first arrested by police last summer, thousands of Hong Kongers flocked to newsstands to buy copies of the newspaper to show their support for Lai, who became

a symbol. freedom of the press

for opposing China to take full control of Hong Kong.

Lai, with several pending open cases and who has been in prison since December, was sentenced on May 28 to

14 months in prison for organizing an unauthorized demonstration

on October 1, 2019, which coincided with the 70th anniversary of the founding of the People's Republic of China.

This Thursday, the Hong Kong national security police entered the newsroom and the offices of the 'Apple Daily'. At around 7 a.m., officers also arrested Editor-in-Chief

, the CEO of parent company Next Digital,

, and two other editors,

. It was the 'Apple Daily' who confirmed the names of the detainees, accused of "colluding with a foreign country or with external elements to endanger national security." In a press conference, the police said that since 2019, the 'Apple Daily' had published

. In a statement, they added that the agents had obtained a court order to register a company and be able to "confiscate journalistic material."

Jimmy Lai promoted the 'Apple Daily' as a tabloid and provocative, but also independent and highly critical of Beijing, at a time when

, than since he stopped Being a British colony - 24 years ago - lives with a special administrative regime somewhat far from the rigid control of the capital.

This week it has been two years since thousands of Hong Kongers, especially the younger ones, rebelled, called themselves pro-democracy activists, and began a fight against the authoritarianism of the Chinese Communist Party (CCP).

Protests that became a loop of destruction and fire.

The pandemic curbed the outrage in the streets

And it helped build momentum to Beijing to prepare a National Security Law that has changed everything.

More than a hundred detainees in a year

More than a hundred people have been arrested after the entry into force of the new law in July 2020, which

punishes with life imprisonment the crimes of secession, subversion, terrorism and collusion with foreign forces

. In addition, Beijing established an office in the former colony to be the "guardian of national security in the territory." It was the first time for Chinese agents to operate openly in Hong Kong.

This year has been

marked by the repression of press freedom

in the city, despite being a fundamental right guaranteed by the Basic Law of Hong Kong, the mini-constitution of the territory.

, head of the local executive, assured after the passage of the national security law that the people of Hong Kong could still enjoy freedom of speech and the press.

But the events that have occurred say the opposite.

The first consequences of this law were the prohibition of some slogans and hymns that were popularized in the protests, as well as any reference to independence, under punishment of secession.

from the shelves of public libraries and schools

As for the press, the magician Jimmy Lai (73 years old) is also being investigated under the national security law for alleged collusion with foreign powers to intervene in the affairs of the city, the same investigation that has led to the raid of the Thursday in your newspaper.

In May, like Lai, seven other prominent democracy advocates in the city, including 25-year-old activist

, as well as former lawmakers

These rulings came a day after the Hong Kong Parliament, lacking opposition parties in its seats, passed a bill that modified local electoral laws, reducing the voting capacity of the public, while

who make decisions for the city.

On March 11, it was the National People's Congress (PNA), China's most important annual political conclave, that approved the comprehensive reform of Hong Kong's electoral system.

It only remained to ratify it in the city legislature.

AsiaSeven thousand policemen and up to five years in prison: forbidden to remember the Tiananmen massacre in Hong Kong