China News Agency, Beijing, June 17th, title: Chinese translation master Xu Yuanchong: Passing a hundred-year-old life with poetry   China News Agency reporter Ying Ni   "Life is not how many days you live, but how many days you remember. Every day you want to live is worth remembering."   On the cover of the newly published "Study Diary of Southwest Associated University" this year, the sent 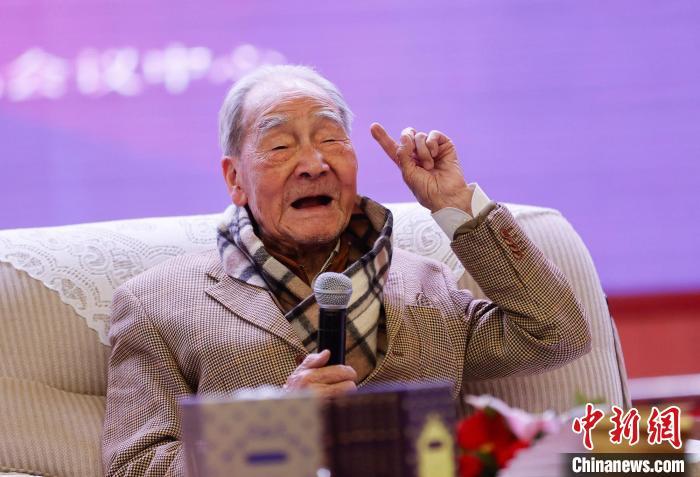 On the cover of the newly published "Study Diary of Southwest Associated University" this year, the sentences written by Xu Yuanchong in the diary were printed.

This sentence is like a portrayal of his life.

Xu Yuanchong was born in Nanchang, Jiangxi on April 18, 1921. At the age of 17, he was admitted to the Department of Foreign Languages ​​of Southwest Associated University with excellent results. After a small test, he was only 20 years old and wrote in his diary that year: "About translation It's really my advantage, I should do the job of creating beauty."

After graduating in 1943, he chose one thing and devoted his whole life to the translation of Chinese-English and Chinese-French literature.

In an exclusive interview with a reporter from China News Agency in January this year, Xu Yuanchong was still able to sing the school song of Southwest Associated University full of energy. He said that it was a place where he could always give his faith.

The last time I attended a large-scale public event was when Peking University celebrated Xu Yuanchong's 100th birthday on April 18 this year.

He went on stage and sat in a wheelchair to talk for more than 20 minutes, still focusing on poetry translation and beauty: "Guan Ju is the first poem in China. Many foreigners do not understand Guan Guan Ju Jiu and think it is Guan Guan. It’s a kind of bird. In fact, it’s clearly stated in the poem that it’s a turtledove bird. But the turtledove is a "cuckoo" call, how can it become a "guanguan"? Because if it is a "cuckoo jujudo", it will not be pronounced. It’s loud, and the rhyme is not beautiful. The ancient Chinese were very wise, adding a vowel to form'Guan Guan', and the chanting is very comfortable and beautiful."

Although the ears were hard, it did not affect Xu Yuanchong's expression of his own views; even if he was weak, he needed someone to help him sit up, but his diligent spirit moved the audience.

Xu Yuanchong has repeatedly mentioned in public that his attitude towards translation and creation is "beauty", "beauty has no borders and no limits. I hope everyone can share the beauty of the world and spread the beauty of China. Make the whole world more and more beautiful. No matter what everyone likes, I hope that in the end there will be nothing but truth, goodness and beauty."

In 2017, he fell while riding a bicycle and fractured his right leg. That night was the Mid-Autumn Festival.

Xu Yuanchong, who was intoxicated in the moonlight, said goodbye to bicycles.

Even at home, the old man once insisted on going downstairs at two in the morning just to enjoy the moon.

"Why do you like to look at the moon?" "Hey, the moon is beautiful! Life is the pursuit of beauty. Don't look at the beautiful things, look at the ugly things. You have to look, how can you get "Jing Ye Si" if you don't look at it. , So others don’t do it well, I do it well."

"The beauty of sound, shape, and meaning" is the "three beauties" proposed by Xu Yuanchong in the translation industry, and it is also a concretization of traditional translation standards on the basis of "faithfulness, elegance and elegance".

Although he had offended many colleagues, Xu Yuanchong still went his own way, even having the nickname "Xu Da Pao".

He didn't care about the evaluation of "Cannon" at all. He also claimed to be "the only person who has sold more than one hundred books at home and abroad, and the only person who translated poems into English and French", and the same is printed on his business card.

A reporter from China News Agency had visited Mr. Xu Yuanchong's home before and asked him for advice on the question of "whether it is too arrogant?"

"I think I'm normal and people can't do it (I can do it). Is this madness?" In his opinion, this is seeking truth from facts, not madness.

Professor Liu Heping, founding dean of the School of Advanced Translation, Beijing Language and Culture University and director of the Chinese Translation Association, recalled meeting Mr. Xu Yuanchong for the first time. “It was an international conference. He came over on crutches and Dangdang knocked on the door three times. Don’t invite me, I’ll come by myself’, of course this is Mr. Xu’s joke.” She said that her husband told the meeting that his translation principles were “sound beauty, form beauty, and beauty”, which is true.

The talented Qian Zhongshu once praised Xu Yuanchong: "Dancing with the shackles of rhyme and rhythm, it is amazing to be flexible and free."

My friend Yang Zhenning also commented on him: "Implant the characteristics of Chinese language and characters in translation."

In 2014, at the age of 93, he won the "Northern Lights Outstanding Literary Translation Award", the highest award in the international translation industry.

"The international environment we live in requires fruitful communication. Professor Xu Yuanchong has been committed to building a bridge of communication for people who speak Chinese, English and French." The International Federation of Translators said in the "Northern Lights" award ceremony.

And what Xu Yuanchong talks about on almost all occasions is to spread the beauty of Chinese culture to the world.

And this is not a high-quality translation.

"Therefore, one of the important tasks for all of you here is to bring Chinese culture to the world and make the world culture more radiant." This is the last sentence Xu Yuanchong said on his 100th birthday, and he was met with warm applause.

Today, he swayed his 100-year-old life with a poetic touch.