In Peru the Lambda variant emerges: for WHO it is "variant of interest"

Declaring it "variant of interest", WHO states that it is observing its behavior in terms of contagion power, before its possible inclusion in the category of "variants of concern", such as Alpha, Beta, Gamma and Delta 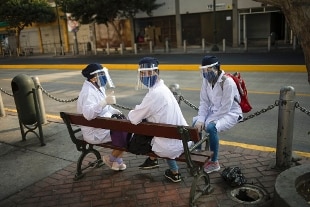 The World Health Organization (WHO) has designated Lambda as a 'variant of interest' of the SARS-CoV-2 virus a strain first detected in Peru in August 2020 and present in several Latin American countries . According to the Peruvian authorities cited in the WHO weekly report, 81% of Covid-19 cases diagnosed in the country since last April are associated with the Lambda strain. Declaring it "variant of interest", the WHO says it is observing its behavior in terms of contagion power, before eventual inclusion in the category of "variants of concern", such as Alpha, Beta, Gamma and Delta.

First detected in August 2020 in Peru ', currently 29 countries around the world have reported its presence, particularly in Latin America, including Argentina and Chile. WHO indicates that it is observing the epidemiological behavior of the strain and its "potential increase in transmissibility and resistance to neutralizing antibodies". The UN agency has identified the Lambda strain based on the

to designate variants without stigmatizing the countries where they are first detected.