The US president in Geneva for the summit with Russia. Meetings with Putin, from Clinton to Biden

Since his arrival in the Kremlin in 2000, more than 21 years ago, the Russian President has met with four American Presidents, Bill Clinton, George W. Bush, Barack Obama and Donald Trump.&nbsp; 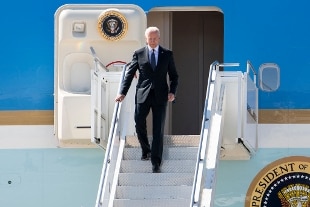 June 15, 2021 After the summit with European leaders, US President Joe Biden left Brussels for Ginerva, where he will meet Russian President Vladimir Putin tomorrow. Air Force One landed in Geneva shortly after 4pm. The Russian president is expected in Geneva tomorrow. The summit between the two heads of state is scheduled for tomorrow afternoon at 'Villa La Grange', an 18th century residence near Lake Geneva, protected by an impressive safety device. Upon his arrival at Geneva airport, Biden was greeted by the President of the Swiss Confederation Guy Parmelin and the Swiss Foreign Minister Ignazio Cassis. Entire districts of the city are armored, with thousands of policemen and soldiers mobilized. Talks between Putin and Biden should "last about four or five hours,"including breaks, "said Kremlin spokesman Dmitri Peskov, reprimanded by the Interfax agency. The White House confirms that the meeting will last 4-5 hours and will begin at 13 local time. According to an administration official , Putin's press conference will be before Biden's.

Since his arrival in the Kremlin in 2000, more than 21 years ago, the Russian president has met with four American presidents, Bill Clinton, George W. Bush, Barack Obama and Donald Trump. With three of them, he took part in top meetings.

met in Moscow. They discuss missile defense, the Balkans and the Caucasus. The atmosphere is no longer that 'bill boris' but the tones are cordial and the content of the talks positive.

can be seen in Ljubljana. The two presidents discuss the missile defense program in Europe. During the summit, Putin warned Bush of Pakistan's ties with the Taliban and al Qaeda and the threat of Islamic terrorism emanating from Afghanistan.

met again in Bratislava. The two leaders discuss how to work together against nuclear terrorism and thus to cooperate for the safety of nuclear sites. The United States pledges to accelerate Russia's entry into the WTO. Putin is Bush's guest in Kennebunkport, Maine, at the beginning of July 2007. And Putin reciprocates with an invitation to Sochi on April 6, 2008. They do not reach any agreement on missile defense, never tones are cordial.

in Prague. The two talk about nuclear safety, the nuclear program of Iran and Kyrgyzstan, in which the US and Russia maintain military bases. The New Start agreement is signed for the reduction of strategic weapons by 30 percent within seven years.

in Helsinki. No public agenda and no press release released following the talks. The joint press conference in which Trump blatantly takes Putin's side on the issue of interference in the 2016 US elections takes up much of the space.