Center-right: Berlusconi accelerates for the single party on the French Republican model

The knight to the allies: there is a strong push within Forza Italia to unite all the acronyms. The model is that of the French Tories and Republicans 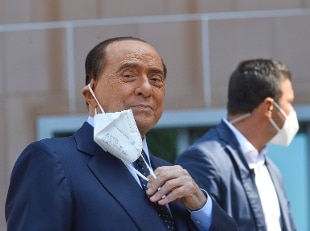 June 15, 2021 "There is a strong push within Forza Italia towards the hypothesis of creating an" Italian center-right party ", a single party that unites the various center-right acronyms". This is what emerged - inform Forza Italia sources - during the meeting of the Forza Italia group in the European Parliament which was also attended by Silvio Berlusconi.

"Party of the Italian center-right". Thus, in the meeting of the Forza Italia group in Strasbourg, the single party project that Silvio Berlusconi has in mind was called. The model is that of

the American Republicans, the British Tories or the French Republicans

, heirs of 'Gaullism', all examples of political formations of 'liberal democrats'.

It is an old dream of the Knight, as remembered by Antonio Tajani himself in recent days. Berlusconi talked about it during the meeting with the Azzurri MEPs, thus going beyond the center-right federation project which, launched by Matteo Salvini in recent weeks, had raised strong criticism in the more moderate wing of FI, represented by the axis between the ministers Mariastella Gelmini and Mara Carfagna.

Today, the leaders of all the center-right parties are discussing to define the candidacies for the autumn administration in small and medium-sized municipalities. While tomorrow, even if the official call has not yet arrived, the summit of leaders should be held, who will be entrusted with the last word on the candidates in Milan, Naples and Bologna. After that, according to what is learned, a meeting should be held between the leaders of the League and those of FI in which to define the "operating rules" of the future federation, which is therefore taken for granted by the leaders of the two parties.

Probably it will start softly with a simple collaboration at the parliamentary level and with a single speaker. Surely, the sprint of Fratelli d'Italia in the polls has accelerated the process, with Salvini wanting to avoid overtaking FdI on his Lega at all costs. At present, the project is that of a

that support the government.

At the moment only Udc and NcI have said they are in favor, FI is divided, Cambiamo-Coraggio Italia by Giovanni Toti and Luigi Brugnaro is not interested. Progressively, the idea is to arrive at a single party, also extended to FdI, in view of the 2023 policies. Because both Cavaliere and Salvini have clarified, even today, that their perspective is to reach the end of the legislature and not to early political elections in 2022 after the election of the next President of the Republic. Yesterday

was very skeptical about the project, "not a priority", in her opinion.

A real political manifesto, which reminded most of the one of the descent into the field, in the style of '94. With an appeal to all allies to create a single center-right party. The Cav, according to blue sources, would like to go beyond the federation launched by Matteo Salvini and arrive at a single party with all the forces of the coalition inside, excluding 'Courage Italy': from the League to the Brothers of Italy. The Forza Italia leader would have announced that he will soon make public this text, of which he has anticipated extensive passages today. Berlusconi is convinced that Giorgia Meloni should also be part of the game: "I know that Meloni will have some problems joining, but I have a duty to appeal to her too."