"Rite of passage" or continuous assessment: in Europe, the puzzle of exams at the end of high school

This year again, the baccalaureate is upset by the health crisis. In France, only two final exams are maintained for the Terminale: philosophy and the grand oral. In Europe, cer ... 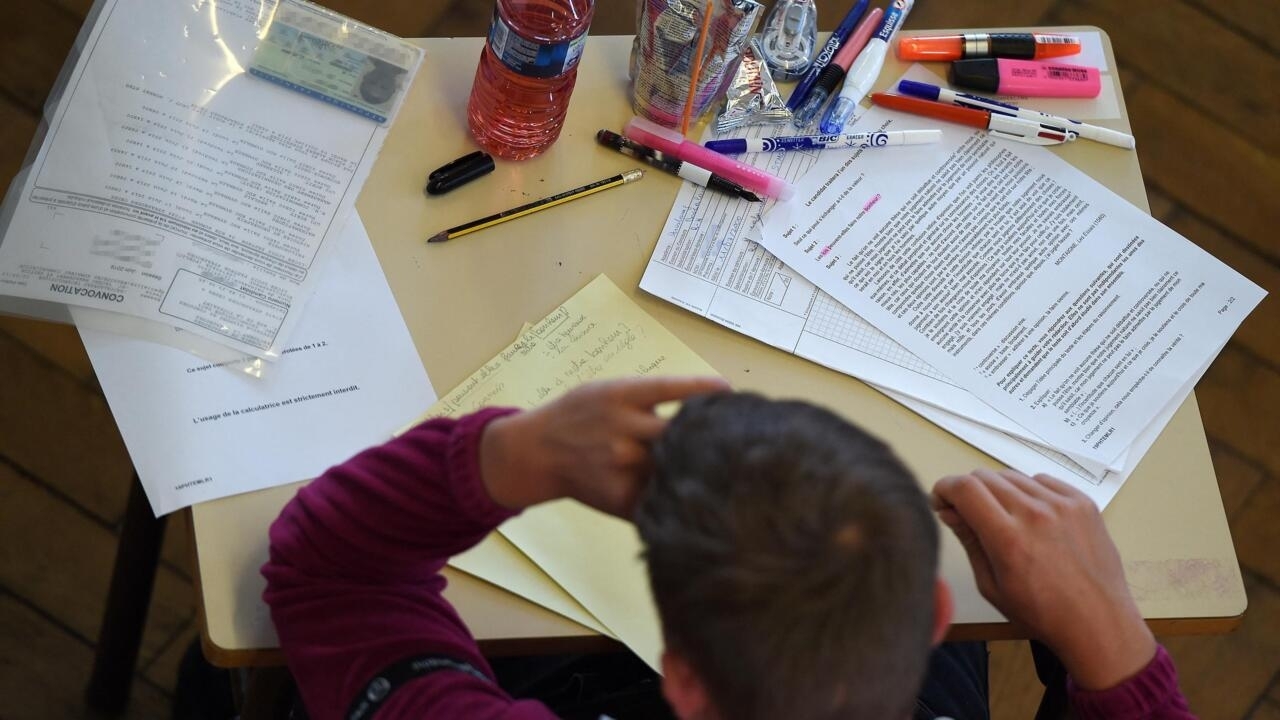 Thursday, June 17, 526,000 high school students in general and technological fields will work at the same time on a philosophy exam.

As is the tradition in France, this "queen test", often dreaded, marks the starting point of the baccalaureate.

Health crisis obliges, this "rite of passage", as it is often presented, is however turned upside down.

If in 2020, the tests had been canceled in favor of total continuous control, this year, the government decided to opt for a hybrid format.

In theory, for general education students, a little more than half of high school students, a hybrid format was already supposed to be implemented this year with the Blanquer reform.

The new bac consists, in fact, of a common core of subjects, supplemented by two specialties of your choice, and 40% of the final mark comes from the continuous assessment.

For this 2021 session, only the philosophy test and the grand oral, an unprecedented exercise, have been maintained.

For the other subjects, it is the continuous assessment that prevails, and this year therefore counts at least for 82% of the final mark of the candidates.

"What seemed important to me is to maintain a terminal test. At the same time this year, we must have had a particular kindness given the situation", explained at the beginning of June the Minister of National Education, Jean-Michel Blanquer .

Kindness and listening for a path of success that takes into account the difficulties experienced by our students.

The layout of the exams gives an important part to continuous assessment while preserving the final exams in the interest of the students: https://t.co/6uH3ng704e

Maintain a rite of passage

Unlike France, several European countries have decided to keep the exam which marks the end of secondary education in its usual form.

In French-speaking Belgium, students will normally take all the national diplomas: the CEB, which concludes the end of primary (at 12 years old), the CE1D, in the second year of secondary (14 years) and the CESS which marks the end. secondary education.

But the latter is much lighter than the bac since it only has two tests, history and French.

The same goes for Spanish high school students, who obtain the bachillerato at the end of their two years of high school, via continuous assessment.

On the other hand, if they wish to continue at university, they must register for the Selectividad, written tests.

These are maintained but subject to a strict health protocol with wearing of a mask, social distancing, ventilation of the rooms, etc.

Finally, in Italy, students will not escape the Maturità exams, from June 16, which consist in particular of an oral exam and a specialty exam.

"France has opted for a compromise, it is not the ideal, but I think it was very important to keep these tests", reacts with France 24 Marie Duru-Bellat, sociologist of education.

"We had to keep this ritual, this 'rite of passage'," she insists.

"The students would certainly have been disappointed not to experience this."

A position shared by Sophie Vénétitay, Deputy Secretary General of SNES-FSU, one of the main teachers' unions, contacted by France 24. "It was important to have tests at the end of high school. It really crowns schooling", she explains.

"More importantly, in our opinion, having national tests is what helps to ensure equality between the pupils."

Last March, when Jean-Michel Blanquer announced the cancellation of the specialty tests, the union regretted that they were not simply postponed to a later date.

According to Marie Duru-Bellat, however, it would have been difficult to follow Italy or Spain and maintain the original baccalaureate.

"The ferry is still an exception in Europe because it is very heavy, with a lot of tests," she recalls.

"At the level of the organization, this obliges the establishments to release certain pupils for several days. Maintaining the tests normally would have further shortened an already disrupted school year."

The "big republican meeting" took a hell of a blow "

If this solution suited some, the new arrangements announced in early May by Jean-Michel Blanquer, however, provoked the ire of unions, teachers and parents of students.

Of course, the students will have to work on the philosophy test, but its stake is also reduced.

For good reason, the grade that will be retained will be the best between that of the continuous assessment and that of the written exam.

"It was the worst decision," insists Sophie Vénétitay.

"This totally devalues ​​the final test but also the work of the correctors and teachers."

On the grand oral side, the same instructions from the ministry.

Faced with many criticisms on the difficulties of preparing for this unprecedented test, the minister recently called for "benevolence" in the scoring.

"On the one hand, the ministry displays great rigor, on the other it invites great benevolence. With these indulgent instructions, the great oral, will have 'great' only the adjective," he continues.

The solution of continuous monitoring?

Faced with these changes, other unions were campaigning for full continuous monitoring, as in 2020. "In our opinion, this was the most suitable solution in view of the difficulties that we have experienced throughout the year. , the teachers would have been much better prepared since they would have drawn the conclusions of last year ", explains Claire Krepper, national secretary of Unsa.

This solution is the one adopted by the United Kingdom.

Pupils are only assessed on the basis of their work during the year.

Last year, the cancellation of the events caused an uproar across the Channel.

The marks had been assigned by an algorithm and thousands of students had obtained marks lower than the predictions of their professors, thus closing them entry to certain universities.

This time, the government therefore left it to teachers exclusively to mark their students.

And this solution is far from unanimous, several voices denouncing a "breach of equality" according to the socio-professional categories of the students or the establishments in which they are educated.

A study from the University of London, published on June 8, shows that students from families whose members are themselves graduates are more likely to have a favorable mark.

"In any case, the majority of French students are already selected on Parcoursup on the basis of continuous assessment. The system is already unequal", retorts Claude Lelièvre.

"This is why this health crisis puts even more emphasis on the importance of improving the scoring system, of reflecting on these substantive questions," concludes Claire Krepper.