The Houthi militia escalated its attacks with drones and missiles towards civilian areas and objects in southern Saudi Arabia, as the defenses of the Arab coalition intercepted a booby-trapped drone launched by the Houthi militia towards the Asir region, while the UAE condemned the Houthi attempts 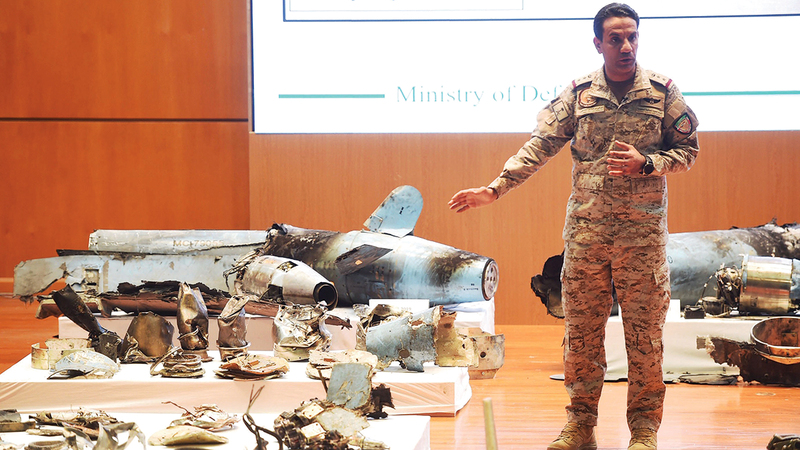 Coalition spokesman Turki Al-Maliki reviews one of the Houthi drones that were shot down.

The Houthi militia escalated its attacks with drones and missiles towards civilian areas and objects in southern Saudi Arabia, where the defenses of the Arab coalition intercepted a booby-trapped drone launched by the Houthi militia towards the Asir region, while the UAE condemned the Houthis’ attempts to target Khamis Mushait with a booby-trapped plane, and at a time the militias escalated their attacks On the Marib and Al-Jawf fronts, the joint forces thwarted the Houthi infiltration attempts on the western coast and the Thara front in Al-Bayda.

In the details, the Saudi Press Agency (SPA) said, "The Civil Defense received a report about the fall of a projectile fired by the Iranian-backed terrorist militia, towards one of the governorates of the Asir region, south of the Kingdom."

The agency stated that the competent authorities began to go to the site, and it turned out that it was a drone loaded with explosives, which fell on a school, and no casualties were recorded.

For its part, the Arab Coalition to Support Legitimacy in Yemen said yesterday that the air defenses intercepted and destroyed a booby-trapped drone launched by the terrorist Houthi militia towards Khamis Mushait.

For its part, the UAE expressed its strong condemnation and denunciation of the attempts of the Iranian-backed terrorist Houthi militia to systematically and deliberately target civilians and civilian objects in Khamis Mushayt, the sisterly Kingdom of Saudi Arabia, through a booby-trapped plane, which was intercepted by the coalition forces.

In a statement issued by the Ministry of Foreign Affairs and International Cooperation, the UAE stressed that the continuation of these terrorist attacks by the Houthi group reflects its blatant defiance of the international community and its disregard for all international laws and norms.

The ministry urged the international community to take an immediate and decisive stance to stop these repeated actions targeting vital and civil facilities, the security of the Kingdom, energy supplies and global economic stability, stressing that the continuation of these attacks in recent times is a dangerous escalation, and new evidence of these militias' efforts to undermine security and stability. in the region.

The Ministry renewed the UAE's full solidarity with the Kingdom in the face of these terrorist attacks, standing with it against every threat to its security and stability, and supporting it in all measures it takes to preserve its security and the safety of its citizens and residents.

In the field details, the fronts in western Ma’rib governorate witnessed violent battles between the Yemeni army forces and tribes on the one hand, and the Houthi militias on the other hand, the most violent of which were concentrated in the Serwah district, where the army and tribes carried out a sudden attack on Houthi positions, which led to the destruction of fortifications and affiliated combat mechanisms. for militias.

The northern and southern fronts of Marib Governorate are also witnessing violent battles between the two sides, in light of the militias' attempts to achieve a breakthrough in the defenses of the army and tribes after mobilizing large combat reinforcements during the last period to the vicinity of Marib.

Field sources said that the Houthi militias have incurred heavy losses during the past two days, with air and ground strikes on the fronts west and northwest of Ma'rib, where the army and tribes targeted Houthi reinforcements that were on their way to the seam areas in Al-Kasara and Al-Mashjah, which left dead and wounded, and destroyed Houthi combat mechanisms. .

For its part, the Arab coalition fighters targeted militia reinforcements that were on their way from the capital’s countryside towards Sarwah, Marib, and destroyed vehicles and vehicles carrying combat elements, which left the Houthis dead and wounded.

This comes after a careful monitoring of the Houthi reinforcements that tried to push them towards their advanced positions on the fighting fronts, which are witnessing a continuous escalation.

According to military sources, two Houthi leaders were killed along with a number of their elements in the recent operations of the army and the coalition in Marib, noting the killing of Houthi leader Brigadier General Abu Deif Hilal al-Sharqi, commander of the Abu Shahid al-Jaradi Brigades, and the leader Colonel Hassan Mabkhout al-Sufi.

In the neighboring Al-Jawf governorate, violent confrontations took place between the two sides, after an attempt to infiltrate Houthi elements towards army and tribal sites in the vicinity of the city of Al-Hazm, the capital of the governorate, which prompted the forces to respond to the attempts, inflicting heavy losses on them.

In Al-Bayda, the Houthi militia tried to create a new site on the "Thra" front between the governorates of Abyan and Al-Bayda, which prompted the joint and southern forces to target it in a preemptive operation, which led to the death of a number of Houthi snipers.

The Houthi militias have repeatedly tried to create new sites on the starboard and facilitator of the Thara front, but all of these attempts failed, after being targeted by the joint and southern forces.

Field sources said that the militias tried to create a new site for sniping operations with medium weapons near the site of "Al-Sabiyat", but the site was discovered and dealt with with artillery and destroyed, noting that the militia's movements were monitored behind the site of "Asha'ara", and that a military operation was being prepared. against those moves.

In Hodeidah, the joint forces thwarted an infiltration attempt carried out by Houthi elements towards the Hays sector, as part of their attempts to penetrate the contact lines from the northwest of the city of Hays.

Meanwhile, the engineering teams of the joint forces managed to dismantle mines, explosive devices and projectiles planted by the Houthi militia in the village of Beit Maghari, west of the city of Hais, that were threatening civilians, as they were dismantled and moved to a remote area for destruction.

• The joint forces thwarted an infiltration attempt carried out by Houthi elements towards Hays sector in Hodeidah.