Draghi on the Memorandum signed by Conte and Xi Jinping: "we will examine it carefully". "Beijing is an autocracy that does not adhere to multilateral rules". The government has already exercised the 'golden power' against a Chinese company in Italy &nbsp; 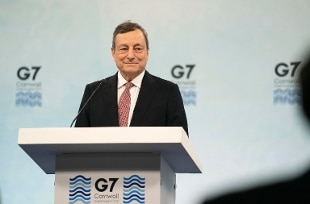 June 14, 2021 The challenge to Beijing set up by US President Joe Biden starts from Cornwall and endorsed, albeit with more moderate tones, by the other 6 Western countries of the G7. Not only with the words of condemnation of forced labor and human rights violations and in returning to ask for an international investigation into the origins of the virus, the challenge to the New Silk Road also starts from Cornwall, with a substantial infrastructure plan alternative to that Chinese. The initiative - American - will take the name of 'Build Back Better World (B3W)', and is a shock for Beijing, in fact a counter-move by America - flanked by Italy, France, Canada, Germany, Japan, United Kingdom - to the economic competition of the Dragon.

A delicate and potentially embarrassing situation for Italy, the only Western country to sign, in March 2019, agreements on the Silk Road, with the first Conte government. But Mario Draghi, in a press conference at the end of the G7, does not rule out that those agreements may be reviewed. In summary, dismantled. The memorandum signed in 2019, complete with very long lists of individual agreements between the two countries "was never mentioned, no mention" during the G7, assures the prime minister. "As for the specific act, we will examine it carefully ...", he announces.

"Much has been written about China about our position - says Draghi, recalling the rumors that described him as 'cold', together with Chancellor Angela Merkel and the EU leaders, on the acceleration impressed by the States against Beijing - there has been talk of divisions but I believe that the statement reflects the position not ours but that of everyone, in particular with respect to China and other autocracies ". For the Prime Minister, on this, "it is essential to be frank: I have already said it on other occasions, we must be frank about the things we do not share".

Two months ago there was the first veto imposed with the golden power. Prime Minister Mario Draghi announced that he had prevented the sale of 70% of an Italian company active in the semiconductor sector to a Chinese company. An authentic shave in Beijing, and previously the executive had imposed prescriptions on 5G technology supply contracts to Italian companies such as Linkem and Fastweb by dragon companies such as Zte and Huawei.

"Nobody disputes the fact that China has the right to be a great economy like any other - says the premier - What has been questioned are the ways it uses, even with coercive detentions. It is an autocracy that does not it adheres to multilateral rules, it does not share the same worldview as democracies ". To Biden, Italy acknowledges that it "wanted to rebuild what are the traditional alliances of the United States after the Trump period, in which these alliances were seriously flawed".