Final day for the G7 summit in Carbis Bay: the leaders of world powers gathered in Cornwall, after discussing economic recovery and the fight against Covid, will bring the issue of climate change and the defense of biodiversity to the table 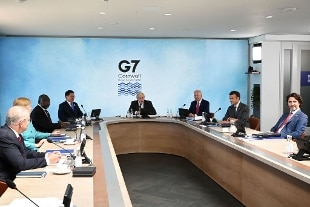 13 June 2021 Focus on the environment and the battle against climate change on the third and final day of the G7 summit in Carbis Bay, the first post-pandemic, extended yesterday in Cornwall to host leaders from Australia, South Korea, India, South Africa and the UN and WHO. After the announced declarations on a global pandemic plan and anti-Covid vaccines and on the containment of China, it is the turn of the climate one: with stricter commitments against emissions, the host Boris Johnson swears and the promise anticipated by US sources of curb the warming of future global temperatures by no more than 1.5 degrees.

The morning, divided into two working sessions before the closing press conferences in the early afternoon, was introduced by a message from the 95-year-old Sir David Attenborough, naturalist, popularizer and famous author of BBC documentaries, chosen by the Johnson government as special ambassador on the climate dossier, which warned the greats that there is no time to waste. And that human beings are already on the brink of the abyss, on the verge of "destabilizing the entire planet" and nature beyond repair.

In response, in the draft declaration released by the British presidency, the Carbis Bay summit puts on the table, among other things, a financial plan for the construction of environmentally sustainable infrastructures in developing countries as part of a strategy to be shared. then in the CoP26 international climate conference scheduled in Glasgow in November (which will also be chaired by the United Kingdom in partnership with Italy). As well as support for a plan to stop the depletion of biodiversity in the world by 2030. Boris Johnson also launches the proposal for a contribution of half a billion pounds to be allocated through the UK BluePlanet Fund to countries such as Ghana, Indonesia and the Pacific islands against unregulated fishing and pollution of the seas, in defense ofcoastal ecosystem and the protection of coral reefs.

"Protecting our planet - said the British premier on the sidelines of the opening this morning of the final day of the summit - is the most important thing that leaders can do for the people. There is a direct relationship between the reduction of harmful emissions, the safeguarding nature, creating jobs and securing long-term economic growth. As democratic nations, we also have a responsibility to help developing countries "on the path to clean growth, and this G7 represents an unprecedented opportunity to lead the world towards a Green Industrial Revolution that has the potential to transform the way we live. "

The final statement will give more details on the global infrastructure plan launched yesterday by the G7 powers, "the positive alternative" to the New Chinese Silk Road, together with the Carbis Bay declaration on the fight against the pandemic, to prevent future ones. . The commitment to donate one billion doses of the anti-Covid vaccine to developing countries is also expected. Most of the leaders present will gather in Brussels on Monday for the NATO summit. On the agenda of American President Joe Biden, there is a meeting with Queen Elizabeth at Windsor Castle in the afternoon, while Wednesday will be the turn of the first face to face with Russian President Vladimir Putin.

China: "Small group" cannot decide the fate of the world

Commenting on the G7 summit in Cornwall, China said today that the days are over when "a small group of countries" could decide the fate of the world. "The days when global decisions were dictated by a small group of countries are long over," said a spokesperson for the Chinese embassy in London, quoted on the Reuters website. "We believe that countries, large or small, strong or weak, poor or rich, are all the same, and that world affairs must be managed through consultation between countries," the spokesman added.