The Yemeni army forces and tribes backed by the Arab coalition thwarted attacks and infiltration attempts by Houthi militia members on the Al-Jawf and Marib fronts, and inflicted heavy losses on them in equipment and lives, while the militias continued their attempts to penetrate the contact areas on the fronts of the western coast and made moves east 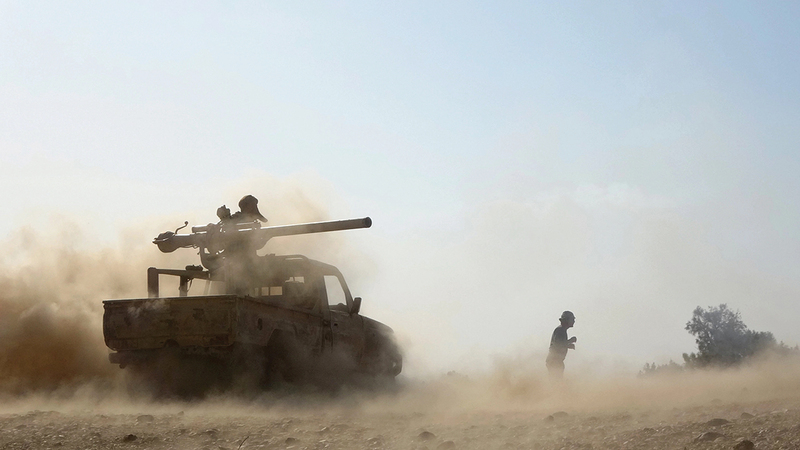 Militias are trying to penetrate seam areas on the coastal fronts

Military sources in Marib expected that the next few days would witness a decisive battle with the Houthi militia.

The Yemeni army forces and tribes backed by the Arab coalition thwarted attacks and infiltration attempts by Houthi militia members on the Jawf and Marib fronts, and inflicted heavy losses on them in equipment and lives, while the militias continued their attempts to penetrate the seam areas on the western coast fronts and made moves east of the city of Hodeidah.

In the details, the Yemeni army forces, backed by tribes and the Arab coalition, managed to break a wide attack launched by the Houthi militia at dawn yesterday towards the Khanjar camp in the Khub Wa Sha`af district of the Yemeni Al-Jawf governorate, according to field sources, confirming the militias' failure to achieve a breakthrough towards the camp despite their almost daily attempts.

The sources confirmed that the attack in which the militias used various types of weapons had been broken, and inflicted great losses on them, noting that units of the 161st Brigade of the Yemeni army launched a counterattack on Houthi sites on the western side of the camp and were able to destroy Houthi combat mechanisms that were stationed on the road linking the camp and the road. International.

The sources pointed out that the recent battles led to securing parts of the international road, while the engineering teams of the Sixth Military District worked to clear several areas of mines and explosive devices planted by the militias and destroyed them.

In Marib, the al-Kasara, al-Makhdara and al-Mushajah fronts witnessed violent battles between the two sides after the Houthis attempted to infiltrate and advance in those locations, in addition to their attempt to advance on the Jabal Murad front, south of the province.

Field sources confirmed that the army and tribes backed by the Arab coalition thwarted an attempt to infiltrate Houthi groups in the al-Kasara front, costing 67 fighters, including a field leader, in addition to destroying and damaging Houthi combat mechanisms used in the infiltration attempt.

The army and tribes forces had thwarted a Houthi attack in the Jabal Murad district, south of the governorate, where the militias are trying to achieve a breakthrough towards the city of Marib from several axes, but they clash with the army and tribes stationed on those fronts and monitor the Houthi movements with high accuracy.

In addition, local sources confirmed that the militias failed to launch a ballistic missile in front of the gate of the Salb company in the Nihm district towards Marib, and it fell minutes after its launch, which caused a huge explosion in the area.

On the other hand, the Yemeni Minister of Defense, Lieutenant-General Muhammad al-Maqdashi, stressed that the army cannot neglect national gains at any cost, and it is not possible to accept that the Yemeni people remain hostages to the Houthi militia, and pointed out in a meeting held in Marib that the army leadership and the local authority included sacrifices Army.

The meeting praised the support provided by the Arab coalition and its standing by the Yemeni people and its armed forces.

On the other hand, military sources in Marib expected that the next few days would witness a decisive battle with the stubborn Houthi militia that rejects all peace initiatives, the ceasefire, and its continued mobilization and launching attacks on Marib and Al-Jawf and other fronts.

The sources indicated that the militias are characterized by evasiveness and lack of seriousness in taking peace and ceasefire decisions, and they will work to stop the attacks towards Saudi Arabia, but they will continue to fire inside Yemen on the grounds that it is an internal problem.

On the other hand, official statistics revealed that 344 civilians were killed as a result of the Houthi bombing of Marib since last January. The militias targeted Marib with more than 55 ballistic missiles, 12 drones, 3 Katyusha missiles, 6 shells and 7 explosive devices.

In Saada, the Houthi militia yesterday buried the body of the Houthi leader Ibrahim Al-Murshidi and the leader Salem Al-Houti, in the Shada district, two of the prominent field leaders working to collect African mercenaries to the "Al-Raqo" camp in the Munabbih district.

The army forces have continuously bombed the camp during the past weeks, which led to the destruction of fortifications and the death and injury of many Houthi elements and mercenaries, including field leaders.

In Hodeidah, the joint forces announced that they had thwarted a violent Houthi attack on their positions in the south of the governorate, noting that they had broken an attempt to infiltrate the militias in the Jabaliya sector in the Tuhayta district, which resulted in the killing and wounding of a number of Houthi militants, and the destruction of their combat mechanisms.

An attack and infiltration attempts by Houthi elements in the seam areas inside the city of Al-Hodeidah, and in the vicinity of Al-Durayhimi and Beit Al-Faqih districts, were also confronted, where Houthi movements were monitored and dealt with with high accuracy.

• A meeting of the Yemeni army praises the support provided by the Arab coalition and its standing by the Yemeni people and its armed forces.