"Dianfanren", do you often eat these intangibles on the tip of your tongue? 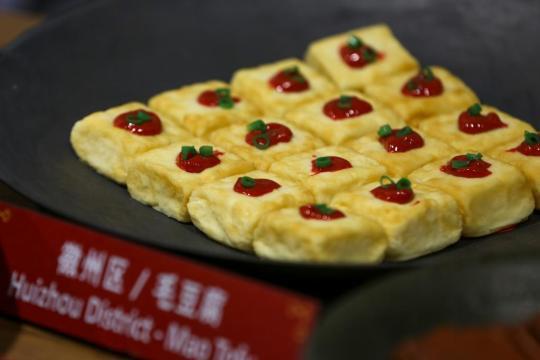 "Dianfanren", do you often eat these intangibles on the tip of your tongue?

June 12 is the "Cultural and Natural Heritage Day" in 2021. Traditional cuisine is an important part of intangible cultural heritage.

The once hometown taste has now become a collective memory.

More and more regional delicacies are being excavated, spread and protected.

Fans, look at the following intangibles on the tip of your tongue. Are there any of the intangibles you often eat?

Smelly mandarin fish, hairy tofu, steamed stone chicken... These delicacies from the ancient Huizhou region have long been spread all over the country.

Huizhou cuisine is the general name of the flavor dishes in Huizhou. Its cooking skills were formed in the Northern Song Dynasty, popular in the Southern Song Dynasty, and became famous in the Qing Dynasty. It has been listed as a national intangible cultural heritage item in my country.

Different from other cuisines, traditional Anhui cuisine is good at cooking, stewing, steaming, and heavy oil, color, and fire power.

According to the characteristics of the dishes, it is necessary to skillfully use different fire conditions such as low fire, gentle fire, and martial fire to make the cooking soft and waxy without losing its shape and the mellow taste of the stew soup without losing its soul.

According to the relevant person in charge of the Intangible Cultural Heritage Department of the Department of Culture and Tourism of Anhui Province, Hui cuisine accompanies Hui merchants in their long-distance footprints and is widely distributed.

In addition to the mainland of Huizhou, Huizhou restaurants are also widely distributed in major cities across the country.

Kimchi is one of the most representative foods in the traditional Korean diet in my country.

Its production skills are listed as a national intangible cultural heritage project in my country.

Korean kimchi, in a broad sense, includes kimchi, small pickles, and pickled pickles in soy sauce. The most common pickles are pickled with cabbage as the main ingredient.

Pickling kimchi is not a simple "kimchi + salt". The selection of raw materials, salt treatment, and condiment preparation are very particular.

Ancient kimchi was marinated with salt or vinegar. In modern kimchi, peppers, garlic, ginger and other condiments are added to make kimchi, which had only salty or sour taste, become spicy, salty, sweet, sour and other flavors.

A bowl of Huainan beef soup.

Among the Huainan beef soup stores all over the country, which one is authentic?

You need to boil the soup with beef bones until the soup is clear and strong, and then add beef to the soup and cook.

When the key soup is available, the store will put thin slices of beef, thousand pieces, bean cakes and sweet potato flour on the countertop.

After the guests arrive, boil the selected materials in a pot, pour them with a fragrant hot soup, add some red oil, and a bowl of rich and delicious authentic beef soup is done.

Red oil is a hidden "mystery" in Huainan beef soup. It is made by deep-frying red peppers in butter. Therefore, the spicy flavor has the oily aroma, which is very popular among diners.

In Hengshan District, Yulin City, Shaanxi Province, hot lamb stew is the main dish for the locals to welcome guests.

It turns out that there are many plants such as pepper leaves, chives, and flowers, and there is clear and pollution-free natural spring water. These are the best original feeds for improving the taste of lamb, so horizontal goat meat is famous for its tender meat.

For more than a thousand years, local people have explored and summed up a set of unique cooking techniques, including procedures for selecting lamb, slaughtering lamb, and stewing. The ratio of meat to water has detailed requirements, and this production technique has also been selected as a provincial-level intangible cultural heritage project in Shaanxi Province.

In the hinterland of the Qinling Mountains in Huayin City, Shaanxi Province, due to the large temperature difference in the mountains and the long growing time of crops, the locals discovered that the potatoes produced here have high starch content and good taste, so they are used as raw materials for glutinous rice cakes.

Speaking of Huayang glutinous rice cakes, I have to talk about glutinous vegetables.

Shuishuicai is made by pouring the clear soup of boiled noodles or using the thinly cooked batter into a clay pot to ferment. When it is sour and fragrant, add mustard greens, celery, radish and other mountain vegetables and soak in a sealed clay pot.

Milk fan: "fan" made of milk can be salty or sweet

The milk fan is a prefecture-level intangible cultural heritage project of Dali Bai Autonomous Prefecture, Yunnan Province. It is made from fresh milk.

Different from ordinary fried milk rolls, its production process is exquisite. First, part of the milk is fermented into yogurt, put in a pot and heated to 70 to 80 degrees Celsius, and then a certain amount of fresh milk is scooped into the pot and stirred slowly with a wooden spoon After it has condensed into a powder mass, remove it and knead it smoothly, and then use two thick wooden chopsticks to roll it into thin slices. Pull out the corners at both ends, wrap it on a bamboo milk fan rack and dry it. It is roughly like The shape of a rhomboid bamboo fan.

There are many ways to eat milk fan. It can be eaten dry, fried, roasted, or boiled. It can be salty or sweet.

The most commonly used method is to fry vegetables and sprinkle with salt or sugar.

The Chinese food culture is extensive and profound. There are too many delicacies waiting for you to taste. Although what you eat is taste, what you taste is culture.