Britain may postpone "unblocking" due to the spread of mutant strains in Japan, frequent vaccination "oolong"

(Fighting against New Coronary Pneumonia) Britain may postpone its "unblocking" due to the spread of mutant strains, and Japan's frequent vaccination "oolong"   China News Service, Beijing, June 13th. Comprehensive news: The latest data from the World Health Organization website shows that as of 15:33 on the 12th Central European Time, the number of confirmed cases of new coronary pneumonia world 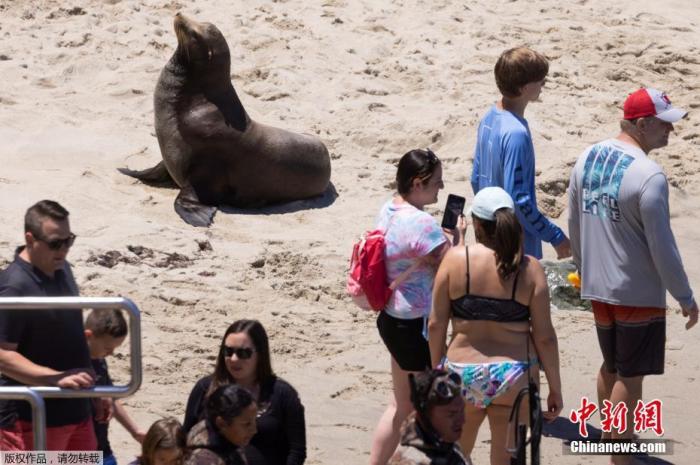 (Fighting against New Coronary Pneumonia) Britain may postpone its "unblocking" due to the spread of mutant strains, and Japan's frequent vaccination "oolong"

China News Service, Beijing, June 13th. Comprehensive news: The latest data from the World Health Organization website shows that as of 15:33 on the 12th Central European Time, the number of confirmed cases of new coronary pneumonia worldwide increased by 410,497 compared with the previous day, reaching 174,918,667; deaths An increase of 11905 cases reached 3782490 cases.

On June 10, local time, during the new crown pneumonia epidemic, California's tourism industry began to recover. A large number of tourists went to the beach to enjoy the sun. Coincidentally, a sea lion also chose to bask here.

Americas: A total of 33.45 million confirmed cases in the United States

The latest statistics from Johns Hopkins University show that the cumulative number of confirmed cases in the United States exceeds 33.45 million, reaching 33,457,310, including 599,664 deaths.

The US Centers for Disease Control and Prevention said on the 12th that as of that morning, 308,112,728 doses of the new crown vaccine had been vaccinated across the United States.

According to the British "Guardian" report on the 12th, in the mass vaccination in the United States, the African and Latino population has been "left behind."

Of the population who have received at least one dose of the new crown vaccine, 57% are white, 15% are Latino, and 9% are African.

In addition, less than half of the states in the United States have vaccinated more than one-third of the African-American population.

The Brazilian Federal University of Rio de Janeiro recently released survey results showing that, as a public service industry that is still operating during the epidemic, bus drivers and ticket sellers in the country are considered to be the second highest risk of new crown virus infection in addition to medical staff. The infection rate is estimated to be 71%.

Ecuadorian President Russo announced on the 11th through social media that the Ecuadorian government has signed a new crown vaccine procurement agreement with China Cansino.

The Ministry of Health of Ecuador said on the same day that the first batch of Cansino vaccine is expected to arrive in July, which will help the country advance its mass vaccination plan.

The picture shows an outdoor bar with customers rushing to the door.

Europe: Britain may postpone "unblocking" due to the spread of mutant strains

As the "δ" mutant strain first discovered in India spread rapidly in the UK, the British epidemic rebounded again.

According to British media reports, in view of the current epidemic situation, the UK may announce on the 14th that the final "unblocking" date will be postponed by four weeks, from June 21 to July 19.

The latest data released by the French Ministry of Health on the 12th shows that more than 30 million people in France have received at least one dose of the new crown vaccine, and the number of people who have received two doses of vaccination has reached 15.67 million.

The Health Bureau of the Greater Eastern Region of France stated on the 12th that at least 4 cases of infection with variant strains found in India were confirmed in Strasbourg, which were initially judged to be cluster infections.

Recently, the epidemic situation in Russia has worsened. Since June 2nd, the number of new people in a single day has been increasing.

According to data from the Russian New Crown Epidemic Prevention and Control Headquarters on the 12th, in the past day, the number of new confirmed cases in Russia reached 13,510, with a total of more than 5.19 million cases.

Moscow Mayor Sobyanin announced a series of restrictive measures to deal with the epidemic on the 12th.

On March 22, local time, the state of emergency was lifted in Tokyo, Japan, and the tourism industry gradually recovered. People wore masks and took a sightseeing bus to enjoy cherry blossoms.

According to a Japanese media report on the 12th, an elderly man in his 90s in a nursing home in Saitama Prefecture received an additional injection after completing two doses of vaccinations.

According to reports, the nursing home uses the canteen as a vaccination station. At noon on the 11th, the old man originally went to the canteen to have a meal, but was mistaken by the medical staff for the vaccination. As a result, he received a third shot.

According to a report by Singapore’s Lianhe Zaobao on the 13th, a 71-year-old woman in a nursing home in Himi City was also given a third vaccine by mistake.

This old lady is in bed all year round and cannot communicate with others.

She had finished two doses of the vaccine last month. When the nursing home was vaccinated on the 9th of this month, the old man was given a third dose because the staff and nurses did not check the list.

According to reports, there have been frequent oolong vaccinations in Japan recently.

In addition to more vaccinations, there have also been cases where a person was given two doses of vaccine on the same day, injected with undiluted vaccine stock solution, emptied the injection, mistakenly used saline as a vaccination, vaccinated the vaccine that was not stored at a low temperature as required, due to Operation errors lead to the scrapping of vaccines, etc.

South Korea’s Central Anti-epidemic Countermeasures Headquarters reported on the 13th that as of 0:00 that day, South Korea had newly confirmed 452 cases compared with the previous day, and a total of 147,874 confirmed cases.

According to data released by the African Centers for Disease Control and Prevention, as of the 10th, 50 African Union member states have received about 54.9 million doses of the new crown vaccine, of which 35.9 million doses have been vaccinated.

In terms of coverage, only about 0.6% of the population in Africa has completed vaccination.