"Political motives prevail over justice": how Zelensky is reforming the judicial system of Ukraine

The President of Ukraine approved the Strategy for the Development of the Justice System and Constitutional Proceedings for 2021-2023. It speaks of the need to "strengthen the independence of the judiciary and its accountability to society." In addition, the authors of the document point out the absence of a mechanism for bringing the judges of the Constitutional Court to disciplinary responsibility. The reform is being carried out against the background of a conflict between the President of Ukraine and the judges of the Constitutional Court. Earlier, a number of criminal cases were initiated against the chairman of this instance, and Vladimir Zelensky is demanding his resignation. The reason for the conflict was the decision of the Constitutional Court on a number of anti-corruption norms and innovations. According to experts, the Ukrainian leader expects to subjugate the judiciary. 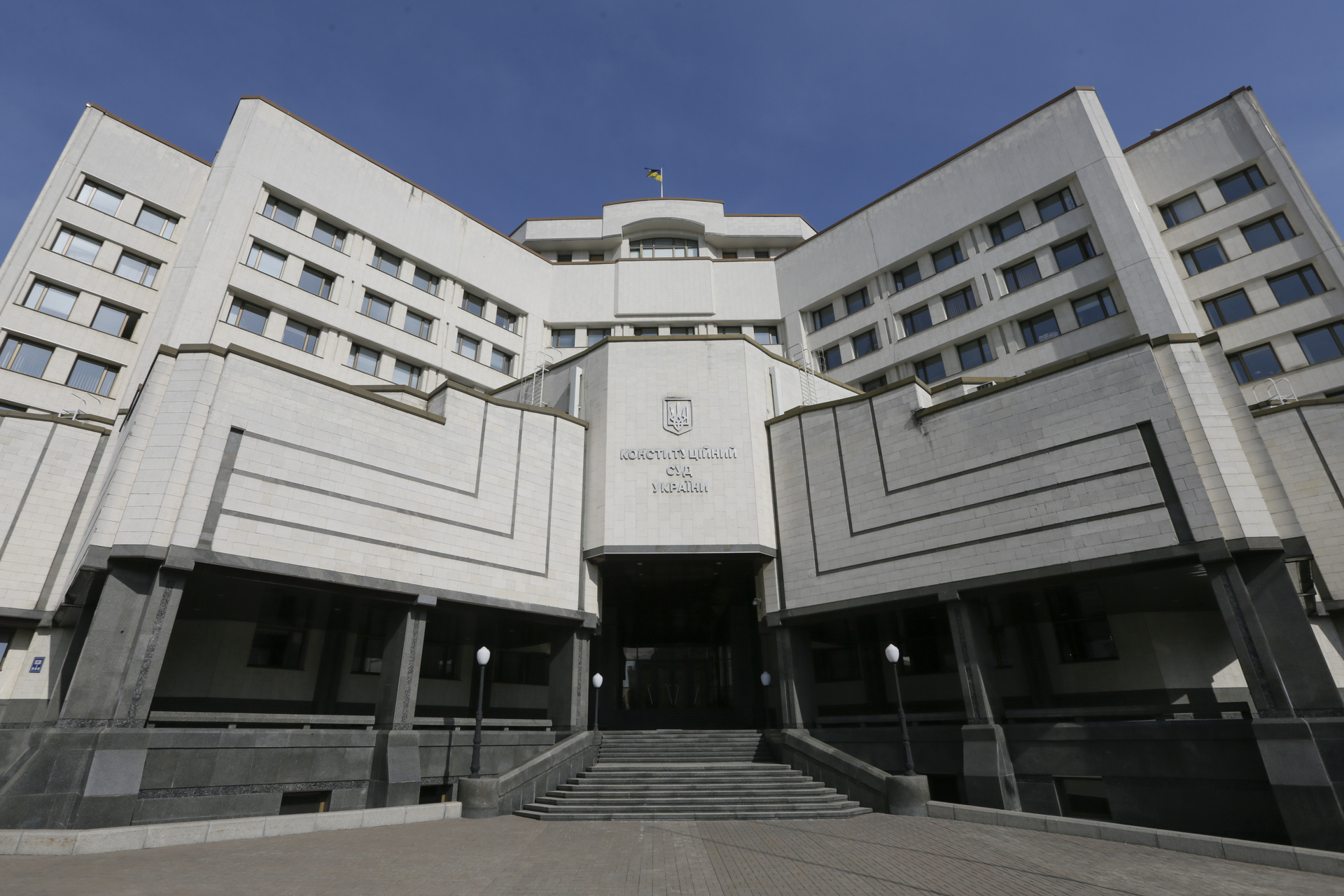 The President of Ukraine signed a decree "On the Strategy for the Development of the Justice System and Constitutional Court Procedure for 2021-2023."

This was reported on the official website of Vladimir Zelensky.

The strategy defines "the basic principles and directions for the development of the justice system, taking into account the best international practices."

One of the objectives of the initiative is to improve access to justice.

The authorities intend to conduct an audit of local courts to identify problems and shortcomings of the judicial system.

“One of the goals of the strategy is to strengthen the independence of the judiciary and its accountability to society,” the press service of the Ukrainian president said in a statement.

For this, in particular, it is planned to form the High Qualification Commission of Judges and the High Council of Justice based on the results of an open competition "with the participation of international experts."

Part of the strategy is devoted to reforming the Constitutional Court.

It is about "improving the mechanisms for checking the integrity of judges" of the Constitutional Court and their compliance with the standards of professional ethics.

“It is proposed to change the procedures for the competitive selection of candidates for the position of judge of the Constitutional Court, their verification for integrity and compliance with the level of professional competence, with the possible involvement of international experts.

It is envisaged to introduce a mechanism to protect judges of the Constitutional Court from political and other pressure when making decisions and conclusions, ”the press service of the Ukrainian president said.

The authors of the strategy say that one of the key problems is the lack of a mechanism for confirming the integrity of the Constitutional Court judges and compliance with the standards of professional ethics.

It also notes the "imperfection" of the procedure for the competitive selection of candidates for the position of judges of the Constitutional Court.

Another shortcoming of the existing order, the authors of the document call "the lack of proper mechanisms for bringing judges of the Constitutional Court of Ukraine to disciplinary responsibility."

In addition, the drafters of the strategy complain about the lack of effective mechanisms for monitoring compliance by CC judges with anti-corruption restrictions.

"War" of the authorities

Recall that Vladimir Zelensky announced a large-scale reform of the judiciary back in 2020.

In March 2021, the Verkhovna Rada approved in the first reading one of the key bills aimed at reorganizing the judicial system.

If the law is adopted, it will be formed by the High Council of Justice for a four-year period based on the results of a competition.

The competition, in turn, will be conducted by a Commission on Virtue Issues, which will consist of three judges or retired judges, as well as three candidates from among international experts proposed by international structures helping Ukraine to fight corruption.

The reform of the judicial system is taking place against the background of a conflict between the executive power of Ukraine and the Constitutional Court.

And, as the RT source in the Ministry of Justice of Ukraine believes, the main goal of the reform is to disperse the current composition of the Constitutional Court.

“Zelensky realized that he could not work with the current composition of the court.

He wants to fire all judges and recruit new ones, apparently more loyal.

Considering how European and American partners criticize the work of the entire system, the president's entourage intends to invite Western representatives to competitions for the selection of judges.

But the last word should still remain with the authorities, ”he said.

At the same time, the interlocutor of RT from the office of the President of Ukraine believes that the authorities will use the new rules for the formation and monitoring of the judicial system for their own purposes.

“The changes imply the ability to audit judges.

And this will make it possible to put pressure on them, since violations can always be found, ”he says.

As a reminder, on June 10, judges of the Constitutional Court of Ukraine blocked the work of the highest court.

The judges demand that the head of the Constitutional Court, Alexander Tupitsky, who was dismissed by the authorities, be returned to participate in the meetings.

Olga Sovgirya, deputy of the Servant of the People faction, wrote about this in her Telegram channel.

Interfax confirmed this information with reference to its own sources in the Constitutional Court of Ukraine.

Six judges are reported to have joined the boycott.

At the same time, the press service of the Constitutional Court did not officially confirm this information, but did not deny it either.

The criminal case against Tupitsky was opened back in October 2020.

The investigating authorities suspected him of "treason" and "illegal alienation of land in Crimea."

In January 2021, the State Bureau of Investigation (SBI) brought charges against Tupitsky under articles of knowingly giving false testimony and bribery of a witness.

And in March, the RRB initiated another criminal case against Tupitsky - under Article 353 (unauthorized appropriation of power).

Tupitsky was prosecuted after the Constitutional Court of Ukraine declared certain provisions of anti-corruption legislation unconstitutional.

It was about the article of the Criminal Code of Ukraine on inaccurate declaration, illegal enrichment and filing of electronic declarations.

In addition, the court ruled unconstitutional a number of powers of the National Agency for the Prevention of Corruption.

The COP's verdict provoked a sharp protest from Zelensky.

The President considered the decision of the court to pose a threat to the national security of Ukraine.

The head of state even tried to disperse the court by submitting to the Rada a bill on the early termination of the powers of judges and declaring their decisions null and void.

However, this initiative failed, since, according to the current legislation, the decision on the early termination of the powers of judges can only be taken by the members of the Constitutional Court themselves, while at least two thirds of the composition must approve such a step.

However, already in December 2020, Zelensky signed a decree on the removal of the head of the KSU Tupitsky from the post of judge for a period of two months.

The court refused to comply with this decision.

In its ruling, the instance indicated that the president does not have the right to suspend the powers of the head of the court, which means that his decree on the removal of Tupitsky is "legally null and void and not subject to execution."

In March, the President of Ukraine canceled Viktor Yanukovych's decree on the appointment of Alexander Tupitsky as a judge.

Also, the current head of state canceled the decree on the appointment of another judge of the Constitutional Court - Alexander Kasminin.

According to the president of the Center for Systems Analysis and Forecasting Rostislav Ishchenko, the president of Ukraine is so hastily reforming the judicial system and putting pressure on the Constitutional Court under the influence of Washington.

“Thus, Zelensky wants to show the White House that he listens to his opinion and carries out reforms, improves the judicial system and fights corruption.

But the measures planned by Kiev can be used to put pressure on judges.

As for the idea of ​​inviting international experts to participate in the appointment of judges of the Constitutional Court - this has not yet happened in European countries, ”Ishchenko said in a commentary to RT.

In turn, the president of the Ukrainian Analytical Center, Oleksandr Okhrimenko, recalled in an interview with RT that Petro Poroshenko started the judicial reform, but did not manage to complete it.

“The issue of reforming the judicial system was also raised during the times of Yushchenko and Yanukovych, but in practice nothing has changed.

It is unlikely that serious changes should be expected now.

A RT source in the Servant of the People party adheres to a similar opinion.

“I think that Zelensky will do everything to increase pressure on the Constitutional Court, and on all other instances,” the source said.

At the same time, the executive branch of Ukraine was supported in Europe.

As concluded by the Venice Commission of the Council of Europe, although the status of the Constitutional Court is not in doubt, the norms it had canceled earlier should still be returned.

At the same time, the parliament should restore criminal responsibility for the presentation of a knowingly false statement, according to the conclusions of the commission.

"But the law can establish in more detail various punishments in accordance with the degree of criminal liability," the document says.

Oleksandr Okhrimenko sees nothing surprising in the fact that the Venice Commission actually supported Zelensky's position in the confrontation with the Constitutional Court.

“Political motives are usually put at the forefront and prevail over formal justice.

And in the West, this approach is also actively used.

As for the judicial reform, its main goal is to subordinate the judicial branch of power to the president and recruit people loyal to Zelensky in the Constitutional Court, ”the expert summed up.