On June 12, my country's fifth "Cultural and Natural Heritage Day", this year's theme is "Cultural Relics Reflected in a Century of Journey".   Revolutionary cultural relics carry the glorious history of the heroic struggle of the party and the people, record the great history and moving deeds of the Chinese revolution, are the precious wealth of the party and the country, promote revolutionary 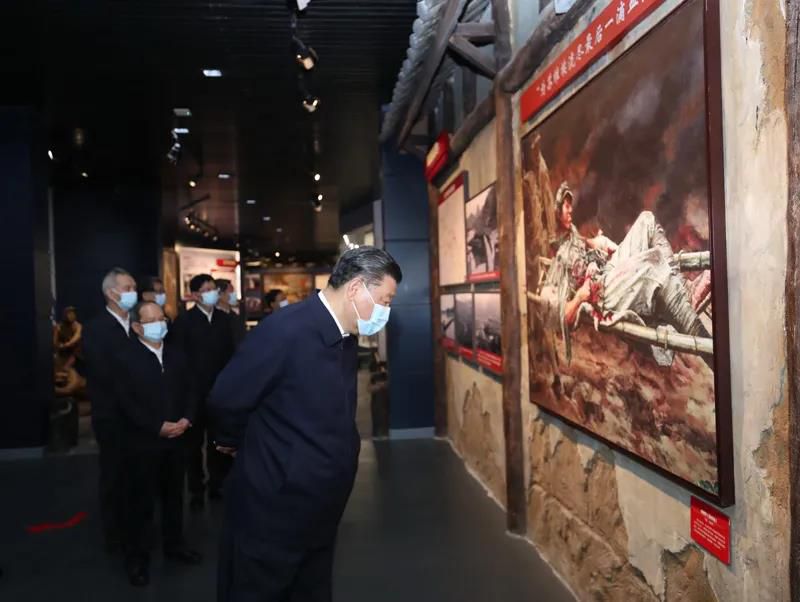 On June 12, my country's fifth "Cultural and Natural Heritage Day", this year's theme is "Cultural Relics Reflected in a Century of Journey".

From the site of the First Congress of the Communist Party of China in Shanghai, the Red Boat in Nanhu Lake, Jiaxing, Zhejiang, to the site of the Second Plenary Session of the Seventh Central Committee of Xibaipo, from the old revolutionary base of Yimeng to the Xiangjiang Battle Memorial Park... Let us follow in the footsteps of the General Secretary, learn about revolutionary cultural relics and inherit the red gene.

The picture shows the typewriter used by Li Dazhao.

The site of the first party meeting in Shanghai, the Jiaxing Nanhu Red Boat, is the "birth bed" of the Chinese Communist Party and the place where the party dreams of setting sail.

A hundred years ago, more than a dozen representatives of the Communist Party of China brewed in Shikumen, Shanghai's common lanes, "a major event that opened up the world"; the meeting was interrupted and moved, and continued to make a sonorous voice on a small boat in Nanhu Lake, Jiaxing : "Long live the Chinese Communist Party!"

These two significant origins of the Chinese revolution have witnessed the beginning of the red history.

This is the root of our party.

On October 31, 2017, the 19th National Congress of the Communist Party of China closed for only one week. General Secretary Xi Jinping led the 19th CPC Central Committee Politburo Standing Committee members from Beijing to Shanghai and Jiaxing, Zhejiang, to pay homage to the site of the First National Congress of the Communist Party of China in Shanghai and the Red Boat at Nanhu Lake in Jiaxing, Zhejiang. Review the history of the founding of the party, review the oath of joining the party, and declare the firm political conviction of the new leadership of the Party Central Committee.

Walking into the Memorial Hall of the First Congress of the Communist Party of China, in front of a showcase with a pamphlet, Xi Jinping stared for a long time-this is the Chinese translation of the "Communist Manifesto" printed and published in September 1920.

The commentator said that it was only preserved by an old communist father hiding in his son's cloak.

The general secretary heard that they are very precious, saying that these cultural relics are historical testimony and must be preserved and used well.

In the Xibaipo Memorial Hall, Xi Jinping stopped for a long time in front of an exhibition board-this is the rule set by the Chinese Communists before they "came to Beijing for exams."

Xi Jinping said one by one: “If you don’t have a longevity, you can do it; if you don’t give gifts, there is still a problem. Therefore, we must solve this problem when we fight against the'four winds'. Toast less, now that public funds are curbed, the key is to persevere; Don’t clap your hands less, we also advocate; don’t name place names after people’s names, this one sticks to; Article 6, our party has a clear understanding of this..."

The swivel chair used by Mao Zedong, the desk used by Zhou Enlai, the latest map of North China used by Dong Biwu... each piece of cultural relics outlines the prosperous years of that year.

"I've been to Xibaipo many times, and every time I came with a heart of reverence, and walked with a lot of thinking." Xi Jinping emphasized, "For us Communists, the history of the Chinese revolution is the best nourishing agent. Multiple warmths. These great histories will add a lot of positive energy in the heart."

The old revolutionary sites, the memorial halls, and the red cultural relics carry the rock-solid beliefs of the revolutionary ancestors, and demonstrate the enduring original mission.

Since the 18th National Congress of the Communist Party of China, General Secretary Xi Jinping has repeatedly urged to make good use of red resources and inherit red genes during local inspections.

At the Gutian Conference Memorial Hall in Fujian, Xi Jinping asked everyone to "think deeply about where and why we started";

At the Long March Departure Memorial Hall of the Central Red Army in Yudu, Jiangxi, Xi Jinping emphasized, “We must keep in mind where the red regime came from and how the new China was established”;

At the place where the "half quilt" story took place in Shazhou Yao Village, Rucheng County, Chenzhou City, Hunan Province, Xi Jinping said with emotion, "We must make good use of such red resources, tell red stories, do a good job in red education, and let red genes pass on from generation to generation"... …