Johnson: The G7 summit is an opportunity to benefit from the lessons of “Corona”

British Prime Minister Boris Johnson told the leaders of the Group of Seven countries yesterday that the current group summit is an opportunity to learn the lessons of the Corona virus pandemic, and ensure that they do not repeat the mistakes that occurred during it, while US President Joe Biden praised the group's plans for vaccination and described it. 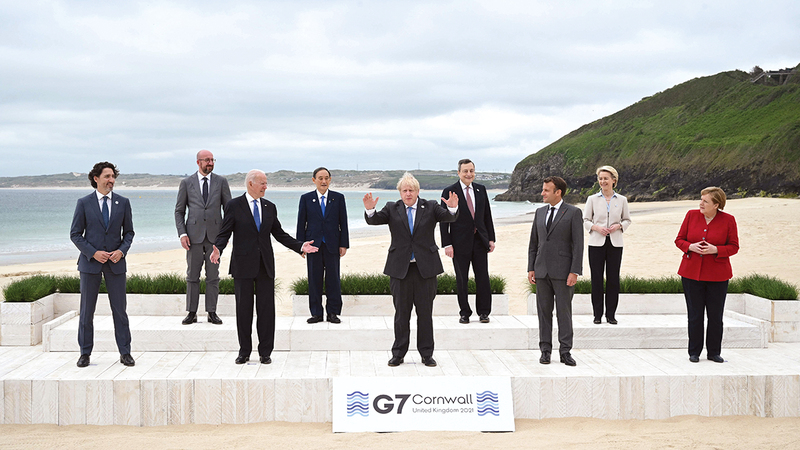 Biden praises the group's plans for vaccination, describing them as "historic"

Johnson: The G7 summit is an opportunity to benefit from the lessons of “Corona”

G7 leaders pose for a group photo ahead of the summit in London.

British Prime Minister Boris Johnson told the leaders of the Group of Seven countries, yesterday, that the current summit of the group is an opportunity to learn the lessons of the Corona virus pandemic, and ensure that they do not repeat the mistakes that occurred during it, while US President Joe Biden praised the group's plans for vaccination, describing it as "Historical".

"We need to make sure that we now allow our economies to recover," he added.

In the same context, the White House said yesterday that President Biden welcomed the plans of the Group of Seven (G7) to donate one billion doses of the “Corona” vaccine to poor countries, and considered this a historic event.

Yesterday, at the beginning of the summit of the seven major industrialized countries, held in southwest England, the White House announced that this commitment constitutes the basis for a comprehensive package of G7 measures to end the epidemic within the next year.

And the British government, as the government of the host country of the summit, had announced earlier that the Group of Seven wants to help poor countries with one billion doses of vaccine, indicating that the planned support until next year should be possible through the distribution of vaccines and financing their costs.

The White House said the action plan that will be decided upon at the three-day summit meeting will include vaccinating the world's most vulnerable people, providing emergency supplies and supporting the global economic recovery.

The plan of the Group of Seven to donate one billion doses of vaccines against “Covid-19” is expected to help combat the epidemic in poor countries, but it will not be able to bridge the huge gap globally in access to vaccines.

Vaccination rates in the world's poorest countries are much lower than those of the Group of Seven industrialized nations and other wealthy nations.

According to the World Bank, the discrepancy in the number of doses given so far between the Group of Seven industrialized countries and low-income countries is 73 to one.

The World Health Organization has welcomed pledges to donate vaccines, but stressed that while dose sharing is essential, the issue of time is just as important.

While these doses reach poor countries to vaccinate health workers and the elderly, the two groups most at risk of dying from “Covid”, the G7 could make good progress by vaccinating children.

A spokeswoman for the World Health Organization said, on Friday, that it is "extremely gratifying" that countries with large quantities of doses are now responding to "the appeal that we have been making since January."

The United States and the European Union have pledged to vaccinate most of the adult population by the end of summer in the northern hemisphere.

The Director-General of the World Health Organization, Tedros Adhanom Ghebreyesus, called for massive efforts to vaccinate at least 10% of the population in all countries by September, and at least 30% by the end of the year.

This will require an additional 250 million doses by September, of which 100 million will be in the current and next two months alone.

Indeed, the call for fair vaccination is driven by concerns that if parts of the world are left wide open to transmission, the chances of worrying mutations that do not work with current vaccines will increase.

According to AFP statistics, nearly 2.3 billion doses of vaccines have been injected in at least 216 regions around the world.

A quarter of these doses were given in the G7 countries, which represent 10% of the population.

This rate is just one dose per 100 in the 29 lowest-income countries, which are home to 9% of the world's population.

The global "Kovax" project was launched in June last year, with the aim of purchasing the Corona virus vaccine globally, and ensuring fair distribution.

His administration plans to procure enough vaccines for 30% of the population in 91 of the poorest participating districts, 20% in India, with donors covering the cost.