CPI of 31 provinces announced in May: 16 areas are lower than the whole country, and Guizhou has the least increase

China-Singapore Jingwei Client, June 12 (Xiong Siyi) The National Bureau of Statistics released May CPI data for 31 provinces on the 11th. The CPI increase in May in 16 provinces was lower than that of the whole country, and the minimum increase in Guizhou was only 0.4%. 16 provinces have lower growth rate than the whole country   In May 2021, national consumer prices rose by 1.3% year-on-year 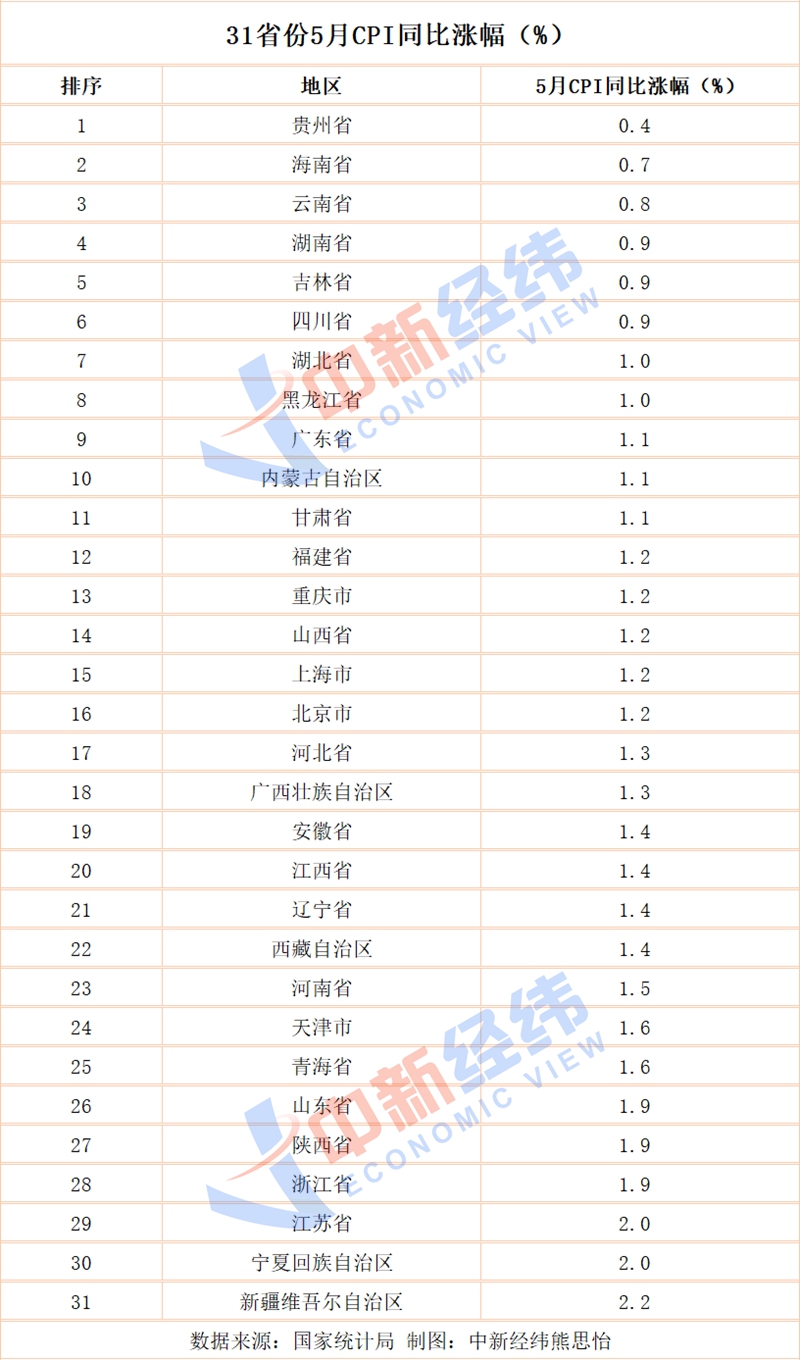 China-Singapore Jingwei Client, June 12 (Xiong Siyi) The National Bureau of Statistics released May CPI data for 31 provinces on the 11th. The CPI increase in May in 16 provinces was lower than that of the whole country, and the minimum increase in Guizhou was only 0.4%.

16 provinces have lower growth rate than the whole country

Dong Lijuan, a senior statistician in the City Department of the National Bureau of Statistics, pointed out that in May, all regions and departments continued to do a good job in ensuring supply and price stability, and consumer prices were generally stable.

Among them, Guizhou's CPI rose the lowest in May, only 0.4%.

The increase in CPI in Hebei and Guangxi provinces in May was the same as that of the whole country, both at 1.3%.

In the 13 provinces of Liaoning, Anhui, Jiangxi, Tibet, Henan, Tianjin, Qinghai, Zhejiang, Shandong, Shaanxi, Jiangsu, Ningxia, and Xinjiang, the CPI increase in May was slightly higher than the national average.

Shen Xinfeng, chief macro analyst at Northeast Securities, pointed out that from the perspective of food items, pork became the main drag on CPI in May.

There are two main reasons for such a sharp drop in pork prices: 1. Overall, pork production capacity is still recovering; 2. Due to the decline in the pork market in March, a large number of price-resistant retail investors carried out secondary fattening, which led to the period from May to July. It has become the peak period for large-weight pigs to be slaughtered, and the supply of pork weight is abundant.

Among the non-food items, the transportation and communication industries became the main driving items for the CPI in May. The reasons behind it mainly came from two aspects: 1. The impact of the ultra-low base number. In May this year, the international oil price remained high in the past three years, but in May last year Oil prices are at a relatively low level in history.

2. In May of this year, the epidemic prevention and control situation was well superimposed with the influence of the May Day holiday, and residents' travel increased significantly.

Regarding the later trend of pig prices, Li Chao, chief economist of Zheshang Securities, etc. predicts that this round of super pig cycle will end in May and June 2022. Pig prices will continue to bottom out, but there will be a seasonal rebound in the peak consumption season. .

Zhang Yu, chief macro analyst at Huachuang Securities, said that considering the rapid restoration of live pig production capacity and the lower-than-expected impact of the mutant strain of African swine fever, it is difficult to judge that pork prices will rebound significantly in the future.

On June 10, the Governor of the People's Bank of China Yi Gang said that this year's global inflation level has risen in the short-term, but there are huge differences on whether inflation can continue in the long-term.

During the epidemic last year, my country persisted in implementing normal monetary policies and domestic aggregate demand was relatively stable, which is conducive to maintaining overall price stability.

Yi Gang said that considering all factors, my country's CPI trend for the whole year of this year was low and then high, and the average growth rate is expected to be less than 2%.

Huatai solid income Zhang Jiqiang's team also believes that the dislocation of the economic cycle and the pig cycle has caused little pressure on the CPI during the year, and the fourth quarter or the high point of the year can be controlled within 3%.

The core CPI may rise month by month as service consumption resumes and manufacturing costs are passed on during the year, and is expected to rise to close to 2% at the end of the year.

According to Huang Wentao, an analyst at China Securities Investment Corporation, that the overall year-on-year consumer price has been maintained to show a mild year-on-year increase in judgment. The CPI reached its first high in May in terms of year-on-year rhythm.

As for the transmission of PPI to CPI, Qin Tai, an analyst at Shenwan Hongyuan Securities, pointed out that the peak of PPI this year does not mean that the strongest transmission to CPI has passed. CPI consumer durables will still bear considerable cost transmission in the next few months. Inflationary pressures cast a shadow over the intensity of demand for durable consumer goods in the second half of the year, which is worthy of vigilance.