"An extremely dangerous trend": why Kiev conducts military exercises with NATO and the United States

In Hungary, the large-scale NATO military maneuvers Saber Guardian 2021, in which Ukrainian units took part, have ended. Kiev claims that these exercises are a step towards "ending Russian aggression" and implementing the country's course towards Euro-Atlantic integration. This year, several more maneuvers will be held on the territory of Ukraine with the involvement of the military personnel of the North Atlantic Alliance. According to experts, the West continues to contribute to the militarization of Ukraine, and during the exercises it is working out possible scenarios of actions on the territory of the country. 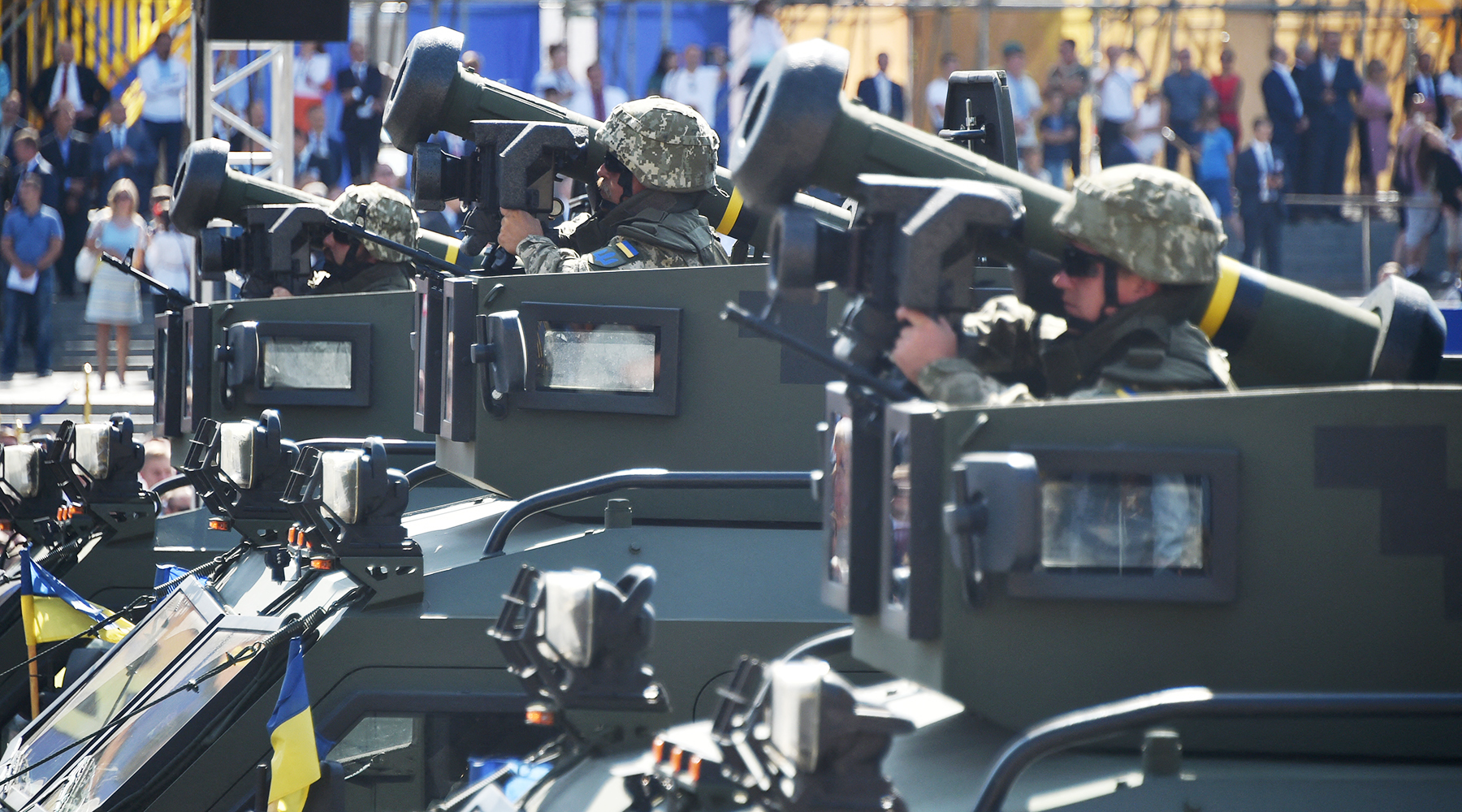 The international NATO military exercises Saber Guardian 2021 ended on the territory of Hungary, in which more than 13 thousand people from 19 countries, including members of the North Atlantic Alliance and Ukraine, were involved.

The maneuvers took place from May 25 to June 9.

As stated in the press service of the General Staff of the Armed Forces of Ukraine, during the exercises "Ukrainian and American units have worked out their combat skills."

In particular, during the practical part of the training, the military equipped positions and engineering structures to repel the attack of a simulated enemy.

“Using the peculiarities of the local landscape and the maneuverability of the units, the paratroopers not only skillfully repulsed the attack, suffering minimal losses, but also demonstrated creative thinking in the unit's actions,” the department said.

It is also noted that at the stage of preparation for the practical part of the exercises, the Ukrainian military, together with instructors from NATO countries, installed the DISE laser combat simulation system, which reproduces the terrain, the movement of vehicles and military personnel on the screen, allowing you to observe each participant in the maneuvers.

According to Kiev, participation in the Saber Guardian is “another step taken by Ukraine to end Russian aggression” and implement the country's course towards Euro-Atlantic integration.

“Participation in exercises of this level for our servicemen was important from the point of view of both improving combat skills and the level of interoperability with the forces of the alliance,” reads a statement from the embassy of the republic in Hungary.

Saber Guardian is part of the largest NATO exercise in Europe in 25 years - Defender Europe 2021.

As stated in early April, the representative of Ukraine in the Trilateral Contact Group on Donbass, Oleksiy Arestovich, on the air of UKRLife.TV, the meaning of Defender Europe 2021 is that the “war with Russia” will be practiced in the waters from the Baltic to the Black Seas.

“The main focus is the Balkans and Crimea and, naturally, everything north of Crimea,” he said.

It is worth noting that Ukraine not only participates in NATO's multinational maneuvers, but also conducts training on its territory with other countries of the alliance, in particular, with the United States.

Recall that in February, Ukrainian leader Volodymyr Zelenskyy signed the law "On the approval of the decision of the President of Ukraine on the admission of units of the armed forces of other states to the territory of Ukraine in 2021 to participate in multinational exercises."

It noted that this year Kiev will hold a total of eight multinational exercises in the country, in which the military from the United States, Great Britain, Poland and Romania will be involved.

It is planned to attract about 21 thousand Ukrainian military personnel and about 11 thousand foreign ones to participate in the maneuvers.

In addition, they talked about plans to involve Ukrainian soldiers in 17 multinational exercises outside the country, including with the participation of NATO states.

In a commentary to RT, the first deputy chairman of the Federation Council committee on international affairs, Vladimir Dzhabarov, called an increase in Ukraine's activity in NATO exercises and in conducting bilateral maneuvers on its territory "an extremely dangerous trend".

“Ukraine, in fact, is preparing for war.

Zelensky and his associates are pushing the country into conflict with the brotherly people, without even understanding the possible consequences.

In the event of a similar situation, they will have to flee Ukraine and hide in another country from the wrath of their own citizens.

Exercises with NATO and the United States do not bode well for Kiev, ”he stressed.

According to Dzhabarov, the United States "wants to knock two fraternal peoples head-on."

In turn, Sergei Tsekov, a member of the Federation Council Committee on International Affairs, believes that the latest actions of the NATO countries indicate that the West continues its course towards the militarization of Ukraine.

“Kiev, in turn, demonstrates its readiness to resolve the internal Ukrainian conflict by military means, not through dialogue with Donbass.

At the same time, the Kiev authorities enjoy the support of a number of Western countries, primarily the United States, hiding behind the notorious "aggression" from Russia, which has never happened, "he said in an interview with RT.

Paired with the USA

Recall that in May, a two-day joint exercise of the flagship of the sea guard of the State Border Service of Ukraine "Grigory Kuropyatnikov" (launched in 1984, a Project 1241 missile boat) and the US Coast Guard ship Hamilton took place.

The patrol boat Starobelsk, one of the ships withdrawn from the US Coast Guard in 2017 and handed over to Kiev by the Americans, also took part in the maneuvers.

"The crews worked out the coordination of the tactical group's actions to suppress provocations at sea and repel an attack from the sky, in accordance with NATO standards," the State Border Service said at the time.

Ukraine and the US Joint European Command are also planning to conduct Sea Breeze 2021 exercises this summer, involving NATO countries, including Canada, the United Kingdom, the Netherlands, Romania, Bulgaria, Greece, Turkey and Latvia.

The maneuvers will take place from June 28 to July 10.

They will involve about 4 thousand military, 40 warships, boats and auxiliary vessels, 30 aircraft and more than 100 vehicles and armored vehicles.

As the official representative of the Ministry of Defense of the Russian Federation, Major General Igor Konashenkov, noted, the scenario of these exercises assumes that the coalition group of forces will be involved in stabilizing the "crisis situation" caused by the activities of some "illegal" for Ukraine armed formations, which "the authorities of the neighboring state provide comprehensive support." ...

According to him, the troops will practice, in particular, conducting an offensive in the seaside direction in cooperation with the amphibious assault, which is planned to be used for joint actions of the Special Operations Forces with the Ukrainian ground forces at military ranges in the Kherson and Nikolaev regions.

“Thus, despite the fact that the exercise is naval in status and even in name, its true boundaries of military activity go far beyond the Ukrainian section of the Black Sea,” he said.

The representative of the Ministry of Defense also said that it is planned to deliver modern weapons, ammunition and material property to the area of ​​the exercises under the guise of maneuvers.

“In the future, as in previous years, all this will be directed to the Ukrainian troops and nationalist formations stationed near the areas not controlled by Kiev in the Donetsk and Luhansk regions,” he said, stressing that, if necessary, Russia will react “adequately to the evolving situation” in the interests of ensuring their military security.

In addition to Sea Breeze 2021, Ukraine is planning a joint exercise with the United States, Rapid Trident, which, according to local media reports, should take place in September.

As noted in the State Border Service of the country, more than 4 thousand military men from NATO countries and partner states will take part in the training.

The statement emphasizes that this year's maneuvers will be "revolutionary".

"A distinctive feature of these exercises is their combination with the general scenario of strategic command and staff training with the designation of the troops" United Efforts - 2021 ".

In addition, multinational units will be formed during the exercise, ”the Ukrainian border service noted, specifying that the military of foreign countries will be integrated into Ukrainian battalions.

Numerous exercises of the Ukrainian side from NATO and the United States pose a direct threat to Russia, said military expert Ivan Konovalov.

“It is important for the West to study the territories near the Russian borders, they are interested in Ukraine as a possible theater of military operations.

And the West does not care how professional Ukrainian servicemen can behave.

After all, Kiev's partners do not appreciate the reforms of the Ukrainian army and attempts to improve the professional qualities of the military, "the interlocutor of RT said.

Colonel of the reserve Viktor Litovkin adheres to a similar position.

He believes that the NATO bloc is drawing Ukraine into its activities directed against Russia, turning the territory of the republic into a potential springboard for hostilities.

“Nobody is going to accept Ukraine into the bloc, but they will use it.

Moreover, Kiev itself seeks to become a vassal and mercenary of the United States and NATO for the dirtiest tasks, without protecting the interests of its people, the analyst said in a conversation with RT.

- At the same time, both Kiev and its western partners are extremely interested in the Crimean direction.

In this regard, appropriate scenarios and military measures are being worked out. "

The head of the Bureau of Military-Political Analysis Alexander Mikhailov also recalled that the Sea Breeze 2021 exercise will be held in the immediate vicinity of Crimea.

"Near the republic, a fairly serious armada will shoot ammunition, move, create all kinds of maneuvers ... In addition, under the guise of these exercises, Western-made weapons will be transferred to the region of their holding, which, after the departure of the American curators, will remain on the territory of Ukraine," he told RT ...

According to Ivan Konovalov, it is impossible to exclude possible provocations from the Ukrainian authorities, as well as Western countries during joint exercises.

However, the expert stressed that the Russian units deployed in the region are ready for any development of events.

“A powerful interspecific grouping has been created in Crimea, which includes all the necessary components - the Black Sea Fleet, the forces of the air division, a strong anti-missile and air defense system, and ground forces. Therefore, in the event of a direct threat, these forces will be put on alert in order to respond to any emergency situation, ”he said.