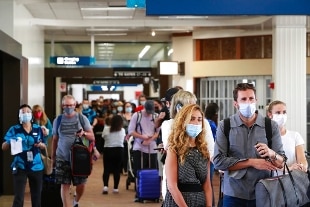 09 June 2021 "With the EU green pass, the 28 million European tourists who, before the pandemic had come on summer holidays, can come to Italy". This is what emerges from Coldiretti's analysis based on Bankitalia data in reference to the European Parliament's final go-ahead for the EU Covid digital certificate which must now be formally adopted by the Council and published in the Official Journal, for entry into force. and immediate application from 1 July 2021.

"An appointment awaited by foreign tourists but also by Italians, especially young people, to guarantee themselves the possibility of movement and greater opportunities for free time such as access such as the discos that could start again in the white zone in July with the green pass. For Italy - underlines Coldiretti - this is an important turning point after last summer arrivals from European countries dropped by 43% with heavy effects on the economy and employment ".

"The return of vacationers from abroad to Italy is in fact strategic for tourist hospitality in the most popular destinations, also because - continues the association - visitors from this foreign countries traditionally have a high spending capacity which amounts for the summer period to 11.5 billion for accommodation, food, transport, entertainment, shopping and souvenirs. But the green pass is also important for the holidays of Italians who in more than one out of three cases (36%) have not yet decided, also due to the uncertainties about 'evolution of the Covid pandemic and on the possibility of displacement, based on the Coldiretti analysis of the Notosondaggi survey ".

"As for the destinations - underlines Coldiretti - 34% have already decided for a seaside resort that remains in first place, followed this year by the countryside, natural parks and oases that with 11% exceed the mountains (9%) , the places of art (4%) and the lakes (2%). The driving force behind the green holidays are the 24 thousand national farmhouses which, often located in isolated areas, in family structures with a limited number of beds and tables and large spaces in the green where distances are not measured in meters but in hectares, they are perhaps the places where it is easier to ensure compliance with safety measures to defend against contagion outside the home ", concludes the association.

# Covid19, Coldiretti: with the EU #greenpass the 28 million European tourists who, before the pandemic had come on summer holidays, can come to Italy