"I didn't want it that way, of course": in Sochi, they detained the one who shot at the bailiffs

In Sochi, police detained a man who fired on the street and killed two bailiffs. Representatives of the Penitentiary Service came to evict him by court order. The man said that he "had" to solve the problem in this way, because otherwise it was not possible to come to an agreement with the officials. As RT found out, the man has been suing the administration since 2016, the city authorities insisted on the demolition of these buildings. Read more in the material RT. 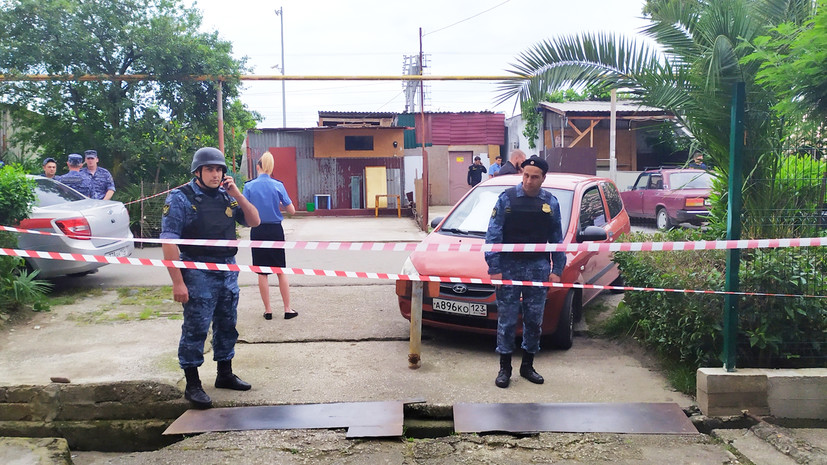 In Sochi, law enforcement officers detained a 60-year-old man who opened fire on the bailiffs who came to execute the court decision.

This was reported by the press service of the regional Main Directorate of the Ministry of Internal Affairs of Russia.

“On June 9, at about 10:35 am, the duty unit of the police department in the Adler district of Sochi received a message that during the eviction of residents from a one-story barrack-type building, which was recognized as unfit for habitation, a local resident had a verbal conflict with bailiffs and he opened fire on him.

Both bailiffs were wounded and died on the spot.

The operational squad detained a 60-year-old resident on the spot and took him to the duty unit, the case was transferred to the UK, "the press service of the main department of the Ministry of Internal Affairs of Russia in the Krasnodar Territory told RT.

According to media reports, on the evening of June 8, bailiffs came to one of the buildings on Prosveshcheniya Street and posted a notice about the demolition of the house planned for the next day.

On the morning of June 9, specialized equipment drove up to the building, accompanied by bailiffs.

A local resident Vartan Kochian came out to them.

He began to demand that they leave the territory, and then began firing a gun.

35-year-old Albert Agozyan and 36-year-old Andranik Mativosyan died on the spot from the received injuries.

A man who was supposed to carry out the demolition of buildings was also injured.

After the shooting, the pensioner surrendered to the police.

A criminal case was initiated against him under Art.

295 of the Criminal Code of the Russian Federation "Encroachment on the life of a person administering justice or preliminary investigation", as well as under Part 3 of Art. 30 and Part 2 of Art.

Also on russian.rt.com In Sochi, they talked about the buildings where the man opened fire at the bailiffs

A video is being published on the Internet in which Kochian said that he had lived in this place since the age of four.

In 2018, a fire broke out on the territory, after which the authorities allegedly decided to recognize the buildings as illegal.

“I have been living in these houses since I was four.

They just brought it - they didn’t allow the land to be formalized, they said “no”, then the government changed.

Not everything is for sale - I am not for sale.

I do not regret what I did.

I tell Andranik - talk to a lawyer.

He says no, I have nothing to talk about.

Well, if they don't want to talk, then the conversation is different, ”says Kochian.

According to him, there are 48 apartments on the territory, but after they were recognized as unauthorized buildings, no one began to settle people.

“I didn't want that, of course.

But no one came to talk to the people, no one.

At least they said: 48 apartments, let's put things in order.

We will make a parking lot, a playground.

Pick up and make shops, stalls.

All of them have little money.

As RT found out, the Sochi administration went to court with a claim for the demolition of illegal buildings on Prosvescheniya Street in 2016.

Officially, a garage cooperative was located there, one of the founders of which was Vartan Kochian.

In fact, as follows from the material of the court, there were no garages there, but stalls and houses were built.

At the same time, a permit for the construction of the above facilities on this land plot was not issued.

The co-defendant in the claim was not only Kochian, but also 4 more people.

The court ordered the defendants to demolish the squatter.

In 2019, the administration again filed a lawsuit against the owners of illegal buildings and again won the court.

“In 2019, a statement of claim was filed for the recognition of capital construction buildings located on a land plot at the address of the city of Sochi, Adler district, Prosvescheniya street, uch.

These are one-storey barrack-type buildings located in the first sanitary zone next to the railway.

In March, the administration and the owners of the unauthorized building filed counterclaims against each other.

The preliminary court hearing on them was supposed to take place on June 21, 2021.

According to the Main Directorate of the Federal Bailiff Service in the Krasnodar Territory, three enforcement proceedings have been drawn up against Vartan Kochian.

In the decree on the collection of the enforcement fee in 2007, he must pay a total of more than 211 thousand rubles.

From 2018, 1 thousand rubles should be collected from him.

And according to the writ of execution, in 2016, an arrest was imposed.