The Inspector General of the Israeli Police, Kobi Shabtai, informed the settlement groups that called for a new “flags march” in Jerusalem, Thursday, to cancel their license, after the police leadership recommended changing the route or canceling the march completely. 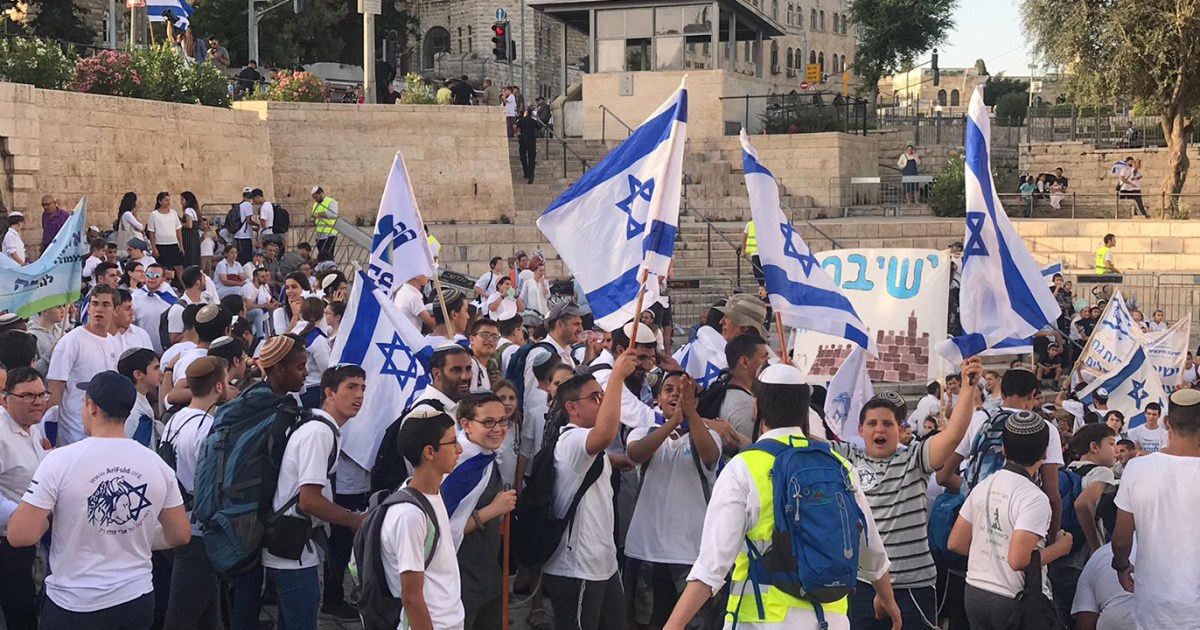 The Inspector General of the Israeli Police, Kobi Shabtai, informed the settlement groups that called for a new "flags march" in occupied Jerusalem, Thursday, to cancel their license, after the police leadership recommended changing the route or canceling the march completely and postponing it indefinitely.

The announcement came after a wide debate in the Israeli political and security levels about conducting the march that the settlers failed to complete on the so-called "Jerusalem Unification Day" on the eleventh of last May, after the Palestinian resistance launched its rockets towards occupied Jerusalem.

As a result, Israel launched an 11-day aggression on the Gaza Strip.

The Religious Zionism bloc, in cooperation with 6 right-wing settler groups, announced a few days ago the organization of a "compensation flags dance" march next Thursday, June 10.

Through the official announcement of the march, the organizers demanded "the unification of Jerusalem forever, and the need to return to walking the streets of Jerusalem with a raised head and the flags of Israel, accompanied by dancing and singing for the sake of the land of Zion and Jerusalem."

According to the announcement, it was planned that the march participants would start from the west of the city towards the Al-Buraq Wall, passing through Bab al-Amud, Bab al-Sahira and Bab al-Asbat at the entrances to the Old City of Jerusalem, which means that they will pass through the Islamic Quarter.

As a result, Israeli officials split between opponents and supporters of organizing the "reparation march."

Among the most prominent opponents of the march was Israeli Defense Minister Benny Gantz, who said that “organizing it at the present time could harm political measures and drag the region into another state of tension.” ".

As for the religious Zionist representative, Itamar Ben Gvir, announced his intention to march in the Islamic Quarter in the Old City, even if the march was not allowed to pass from there, stressing that "Israel cannot acquiesce to the demand of the terrorist Hamas movement."

The head of the Parliamentary Foreign Affairs and Security Committee Orna Barbevai commented on the controversy surrounding the march, saying that "young politicians use state flags to incite and ignite the region."

Professor of Jerusalem Studies at “Istanbul May 29” University, and formerly responsible for media and public relations at Al-Aqsa Mosque, Abdullah Maarouf said that the approval of the Israeli police to hold the flag march is a direct interference in political affairs, especially since the Jerusalem police chief is part of the Israeli right and supports it.

Maarouf added to Al Jazeera Net, "It seems clear that this march aims to support Benjamin Netanyahu and blow up the situation to prevent the establishment of a government opposed to his orientations, while the danger lies in the fact that the police have become a party to the Israeli internal conflict and part of an unprecedented societal polarization between the right and the left."

And the academic Maarouf indicated that this is the first time since the establishment of the occupying state that any memory is celebrated according to the Gregorian calendar, "which indicates the extent of despair reached by the Israeli circles, which only follow the Hebrew calendar."

He added, "This indicates that the settlement groups have reached a stage of very deep despair, during which they are trying to score any point in the current conflict field."

In the event that the march is organized according to the path drawn by the extremist groups, it is believed that it will lead to further escalation in Jerusalem, especially since the settlers’ incursions into Al-Aqsa Mosque and the issues of expulsion of the families of Sheikh Jarrah and Silwan are still interacting.

According to Maarouf, "the Israeli right is trying to blow up the situation right now in the face of the so-called new government of change, in a last desperate attempt to keep Netanyahu as prime minister or go towards total chaos that might prolong the life of his government."

It is unlikely that the march will lead to the ignition of a new comprehensive war at the present time, but it will lead to an escalation of events in Jerusalem, and will constitute a setback for the Jerusalemites who achieved a victory in the Bab al-Amud gift and on Ramadan 28 (last May 10) by thwarting the plans of the extremist settlers.

This setback is relied upon by the extreme right in an attempt to restore the gains it made before Ramadan 28 in Al-Aqsa Mosque, and therefore everyone, according to Maarouf, must realize the danger this march poses if it is allowed in the way the Israeli right wants.

It is noteworthy that the national and religious forces in occupied Jerusalem called for a general mobilization next Thursday in conjunction with the start of the settlement march towards the gates of the Old City, and other calls were launched urging the Old City merchants not to close their shops on that day, even if the Israeli police distributed orders to them in this direction.

The deputy head of Hamas in Gaza, Khalil al-Hayya, issued a stern warning, "against the approach of the Israeli flags march towards the city of Jerusalem and the Al-Aqsa Mosque."

Al-Hayya said at the conference "Civil Society and Civil Action to Support the Resistance and Al-Quds", which was held in Gaza on Monday afternoon, "I hope that this message will be clear so that Thursday will not be like May 11," referring to the Palestinian resistance's firing of its rockets towards occupied Jerusalem. .

Al-Hayya said that the Israeli occupation is trying to embody new facts by announcing the march of new flags, and by escalating it in the Sheikh Jarrah neighborhood, adding, "We tell the mediators clearly, that it is time to curb this occupation, otherwise the thunderbolts will still exist."