Does the new crown inactivated vaccine need a third dose? Can children and pregnant women be vaccinated?

At this stage, the target of China's new crown inactivated vaccine is healthy adults 18 years of age and above, with a total of 2 doses. So, do people need to be vaccinated with the third dose? Can people between the ages of 3 and 17 be vaccinated? The picture shows on June 1, Beijing time, in Beijing Kexing Zhongwei Biotechnology Co., Ltd., located in Daxing District, Beijing. Workers perform 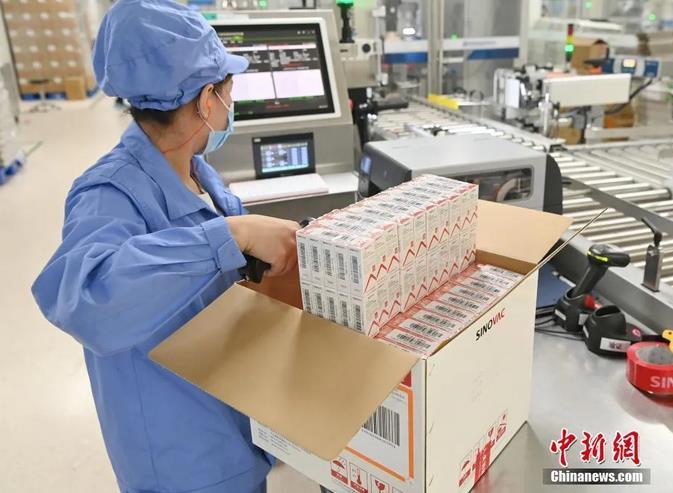 At this stage, the target of China's new crown inactivated vaccine is healthy adults 18 years of age and above, with a total of 2 doses.

So, do people need to be vaccinated with the third dose?

Can people between the ages of 3 and 17 be vaccinated?

Will the third dose increase the antibody rapidly?

Yin Weidong, chairman of Kexing Holding Biotechnology Co., Ltd., revealed in an interview with the media that now China's inactivated vaccines have established immune memory in the body after two doses of immunization have been completed.

"We have recently completed the second phase of clinical research. Volunteers who have received two injections will receive the third injection after three months and six months. The antibody can quickly jump to ten times within one week, half a month. It can reach twenty times such a study."

However, he emphasized that it is necessary to observe in the real-world research process how long the two-shot vaccine lasts for protection.

As far as China is concerned, the completion of the two-dose immunization is actually the most important task for all the public.

"After completing the two injections, the body has already produced immune memory. When the third injection is needed, please give the researchers a period of time." Yin Weidong said that detailed research and testing will be conducted in six months and one year, and then he will suggest where the country should be. Time to strengthen the third stitch.

The picture shows on January 6, 2021, in the warehouse of Beijing Kexing Zhongwei Biotechnology Co., Ltd. in Daxing District, Beijing. The staff displayed a cillin bottle of inactivated COVID-19 vaccine.

Can children, adolescents and pregnant women be vaccinated against the new crown?

At this stage, the target of China's new crown vaccination is healthy adults 18 years of age and above, with a total of 2 doses.

There are also some people who are not suitable for vaccinating the new coronavirus vaccine, such as those with allergies after vaccination; those with severe chronic diseases or allergies; patients with fever or acute illness; patients with thrombocytopenia or bleeding disorders; and they are receiving immunosuppressive therapy Or patients with immune deficiencies; uncontrolled epilepsy and other progressive neurological diseases; pregnant women.

So, can people between the ages of 3 and 17 be vaccinated?

Yin Weidong mentioned that Kexing Zhongwei started a clinical study on minors earlier this year and has now completed Phase I and Phase II clinical trials.

Clinical studies have shown that the safety of the child group (3-17 years old) after vaccination is good.

At the same time, antibody levels are the same as adults.

The safety and effectiveness data have been reported to the Joint Prevention and Control Mechanism of the State Council and the State Drug Administration.

Yin Weidong pointed out that the country has now approved the emergency use of Kexing's new crown vaccine to expand the age range to over 3 years old, but when the vaccine will be used in a lower age group, relevant experts will be organized by the National Health Commission according to China's current epidemic needs and population. Composition, promote the use of vaccines in different age groups in an orderly manner.

Kexing Holding Biotechnology Co., Ltd. spokesperson Liu Peicheng said in an interview that the company is currently carrying out or planning to carry out a number of studies around the world, including investigating the issue of new crown vaccination for small age groups and special populations (such as pregnant women, etc.).

On May 11, in Daxing, Beijing, in the production workshop of Beijing Kexing Zhongwei Biotechnology Co., Ltd., staff were packing vaccines.

Can the new crown vaccine be vaccinated at the same time as other vaccines?

Due to the relatively short development time of the new crown inactivated vaccine and the lack of related research on simultaneous vaccination with other vaccines, the disease control department believes that it is recommended not to vaccinate with other vaccines at the same time until there are no national guidelines and programs.

So, can the new crown vaccine be vaccinated at the same time as other vaccines?

Liu Peicheng said that he is also studying the issue of simultaneous vaccination of the new crown vaccine and other types of vaccines, such as whether it can be vaccinated at the same time as influenza vaccine and pneumonia vaccine.

Will there be an "upgraded vaccine" for the mutation of the new coronavirus?

Liu Peicheng said that currently, studies on the immunogenicity of the variant strains are being carried out.

He said that Kexing Zhongwei's new crown inactivated vaccine has a mature process route. In theory, changing the strain does not need to change the process route, and the feasibility is good.

Kexing Zhongwei will use a small-scale test to confirm whether the existing process route can effectively realize the vaccine production after the replacement of the virus strain.

It is reported that on June 1, local time, the World Health Organization announced that China's Kexing Covid-19 vaccine was included in the "emergency use list."