Myanmar appears to be on the verge of a new civil war, warns a parallel government spokesperson, given the increasing number of weapons in the hands of civilians, in order to protect themselves from the violent and ongoing military campaign. The conflict erupted several decades ago in the border areas of Myanmar, where groups of 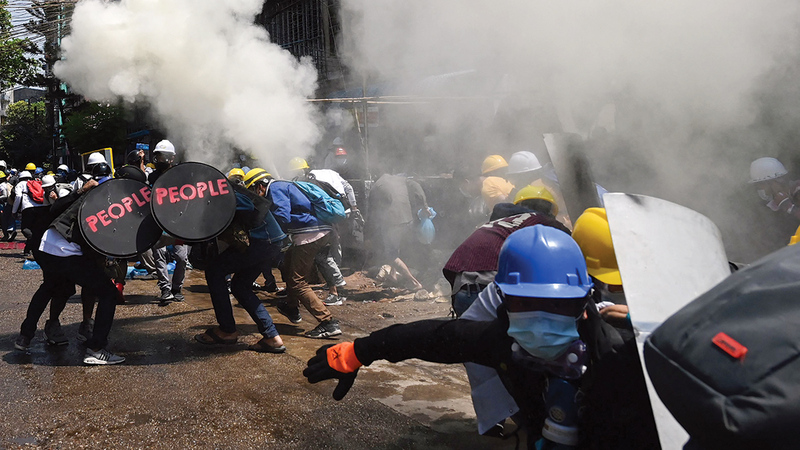 As a result of the brutal repression of the army

Myanmar appears to be on the verge of a new civil war, warns a parallel government spokesperson, given the increasing number of weapons in the hands of civilians, in order to protect themselves from the violent and ongoing military campaign. The conflict has erupted decades ago in Myanmar's border regions, where armed ethnic groups have been fighting against the army for greater autonomy. But since last February's coup, dozens of new armed groups have emerged defending the people in the face of military rule, and several battles have broken out in different parts of the country that were previously considered safe.

"The people of Myanmar were left with no options," said Dr. Sasa, a spokesman for the Government of National Unity of Myanmar (NUG), Dr. Sasa (established by pro-democracy politicians) as the military's constant threats, arrests, torture and killings, have pushed civilians to take up arms. .

"It's just the beginning," he added.

And the situation will get out of hand.

Even if there was only one man left in any village, he would not submit to these killers.

The whole country is heading towards civil war.”

Over the past week, tens of thousands of people have been forced to leave their homes in Kaya state in the east of the country, as a result of intense fighting between the army and the state's newly formed People's Defense Forces, the Karenni Army, an armed ethnic group.

"We attacked them with light weapons, and they responded with artillery," one of the members of this ethnic group told the independent media, "Myanmar Now."

At least 58 armed groups are formed to defend civilians across the country, of which 12 are active, according to the non-profit organization Aclid, which monitors the conflict.

These groups were formed at local levels, and are not necessarily formally associated with Myanmar's national government.

These groups have revealed little about the nature of their training, but their resources are highly diversified.

In the town of Mindat in Chin State, considered the poorest part of the country, volunteers armed with only hunting rifles confronted the army last May.

In other areas, urban youths have fled to the forests to learn how to make explosives.

There have been a number of celebrities who have announced their inclusion in this training, ranging from the former beauty queen who represented Myanmar at the Miss Grand International competition, Htar Htit Htit, to Han Htu Lwin, better known as Kyar Bok, the lead singer of Big Bagh” for popular Myanmar rock songs.

assault on the groom

As for Myanmar's largest city, Rangoon, security forces have been targeted in a wave of attacks over the past week, including shooting and using explosives.

A wedding party was attacked because the groom was suspected of being an army informant.

As a result, four people, including the groom, were killed, after a bomb presented as a wedding gift was wrapped, according to local media.

No one has claimed responsibility for the bombing.

Many schools were blown up or burned by unknown people across the country, after the government army occupied some of them, in an attempt by the protesters against the coup to reinforce the disruption of the education system.

The country's military command ordered parents to register their children to return to school, but most refused.

About half of the teachers who work in public schools are on strike, according to local media.

Crisis Group adviser Richard Horsey said: "Such attacks, including targeting people for collusion with the military, have been worrisome."

"It will be very difficult to contain such attacks once this type of violence becomes the norm in society," he added.

Myanmar's national government, Nag, which has spoken of its plans to create a new federal army, urged anti-coup groups to follow moral guidelines and not target schools and hospitals.

It posted a video last Saturday, showing the first group of People's Defense Forces soldiers who completed their training.

Some armed ethnic groups already fighting the army supported the anti-coup forces, although others refused.

The other seeks to exploit this coup for its regional gains, which further complicates the crisis.

Anti-coup forces face the brutality of a notorious 400,000-strong army, which makes it the second largest in Southeast Asia after the Vietnamese.

Some activists are trying to weaken this army by putting pressure on the companies that supply it with weapons.

Recognition of the Government of National Unity

Sasa calls on the international community to recognize the National Unity Government of Myanmar, as the official leader of Myanmar. He says this recognition will help the unity government to ask oil and gas companies, such as "Total" and "Chevron", to cooperate financially with elected officials, rather than cooperate with army generals. "It is an insult to us that the gas from Myanmar's land is being exploited by the military generals, and that they are being paid by Total and other Western companies to kill the people of Myanmar," Sasa said. Sasa called on the neighboring countries of Myanmar to put pressure, in order to put an end to the army, and to introduce tougher sanctions affecting its capabilities. "The more inaction the international community is, the greater the bloodshed and the potential for civil war and genocide," Sassa added.

And the media talked about the occurrence of more battles between armed civilians and the army in Myanmar during the first quarter of 2021, more than what happened throughout 2020, according to the “ACLED” organization, which monitored a significant increase in reports of attacks against civilians, in addition to Reports of bombings and other forms of violence, including the deployment of artillery, shelling, and the use of grenades.

Previously, violence was concentrated in Rakhine State and Shan State in the north of the country, but it has now spread across Myanmar.

This is likely to put pressure on local leaders, according to Horsey, but it's hard to know what effect this will have on the military in general.

“It's a very large army, it has a lot of military resources, and its leaders are completely indifferent about civilian casualties," said Horsey.

In fact, the military's approach to internal conflict for decades has been to deliberately target civilians, as part of a brutal strategy to confront the insurgents.

"Thousands of the town's residents are stranded as the rainy season begins," he added.

"They say they are in a very miserable state," Ling said, warning of an impending humanitarian catastrophe.

Although there are some aid shipments of food and essential medicines provided by volunteers, these shipments are very few, and the (Corona) disease is spreading along the Indian border.”

At least 833 people have been killed by the army since it took power in Myanmar last February, according to estimates by the human rights group known as the Association for the Assistance of Political Prisoners in Burma.

Thousands have been detained, often in unknown locations, and are at risk of torture.

One activist who met with young men training to fight the army, and who asked not to be named, said that "volunteers believe that violence is the only language the army understands."

She added: “They want to intimidate the army that comes to their homes for arrests, beatings and torture.

Some of these are hotel owners, and others have restaurants, but now they have left all their jobs to face the army.”

"One of the medical students ran away alone to get training," the activist said.

She added: “She was very excited, because she had friends who were killed, and her neighborhood was subjected to terrorism by the army.

She saw people being burned alive in front of her eyes.

This experience prompted her to take up arms.”

• Anti-coup forces face the brutality of a notorious 400,000-strong army, which makes it the second largest in Southeast Asia after the Vietnamese.

Some activists are trying to weaken this army by putting pressure on the companies that supply it with weapons.

• During the past week, tens of thousands of people were forced to leave their homes in Kaya State, in the east of the country, as a result of intense fighting between the army and the newly formed People's Defense Forces in the state, the Karenni Army, an armed ethnic group.

Rebecca Ratcliffe is the Guardian correspondent in Rangoon