Sidelights on the Special Exhibition of "It's Just A Prosperity and Prosperity": Party History and Literary History Reflecting "Red Roots"

China News Service, Hangzhou, June 5 (Reporter Fan Yubin) "When you win, please don't forget us!" This is the last words left by the martyr Qiu Guhuai before his sacrifice.   "How can we forget today, a hundred years from now?" As the Chinese Communist Party is about to usher in its centennial birthday, under the guidance of the Propaganda Department of the Zhejiang Provincial Committee of the 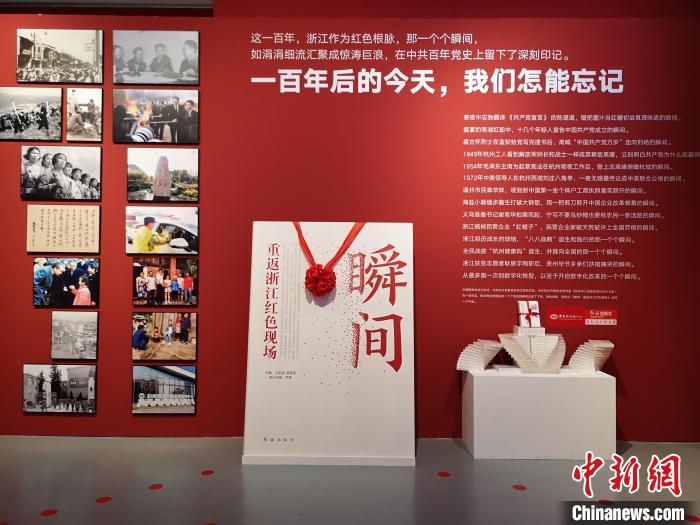 China News Service, Hangzhou, June 5 (Reporter Fan Yubin) "When you win, please don't forget us!" This is the last words left by the martyr Qiu Guhuai before his sacrifice.

At the special exhibition site, there is an endless stream of people who come to the exhibition. They either take a close look, take photos with the works, or hold up a camera to record, or they are inspired and moved by a certain historical moment... This is an experience of a century-old party. The "art feast" of history is also a "party history classroom" that has reached the hearts of the people.

Zhejiang is the place where the red ship of the Chinese revolution started. The century-old journey began in "Zhejiang". The "red roots" became the most vivid background color of the Communist Party of China in Zhejiang's century-long struggle.

Taking time as the axis and history as the key link, this special exhibition is intertwined with party history. The beauty of art and the light of literature and history reflect the century-long journey of the "Zhejiang Window", which also confirms the vigorous vitality of the Communist Party of China from a province. Fenghua is magnificent.

"This'girl in red' holding hands with Premier Zhou is me!" At the special exhibition, Hu Ningfang, a Hangzhou native, stood in front of an old photo, unable to hide his excitement.

In the photo, Premier Zhou Enlai held the hand of Hu Ningfang, who was only 10 years old at the time, with a smile on his face, and Nixon also bent down to get closer to her.

Hu Ningfang told reporters that this historic moment was unforgettable for her.

"I am so lucky and so happy. I am willing to share this with you. I have also been educating the next generation to learn more about history. A happy life is hard to come by and know how to cherish and struggle."

Pictures, texts, and videos show the "Red Map" of Zhejiang by Fan Yubin

At this special exhibition, the Zhejiang Branch of China News Service provided solid pictures, text, and video content of "returning to the scene of party history".

For example, Hu Ningfang’s experience of that lucky encounter that year was included in the "Moment" compiled by the Zhejiang Branch of China News Agency, the Party History and Literature Research Office of the Zhejiang Provincial Committee of the Communist Party of China, and the Party History Research Office of the Hangzhou Municipal Committee of the Communist Party of China (Hangzhou Municipal People’s Government Local History Office). "Return to the Red Scene of Zhejiang" in the book "American President Nixon’s 21 Hours in Hangzhou"; 80-year-old Taizhou Dachen Island veteran land reclamation team member Jin Keren sang improvised "The Song of the Reclamation Team" during the interview. The scene of the special exhibition reveals the passionate years of reclamation in the form of video; the "Red Map" clearly shows the red revolutionary sites, relics and memorial sites in Zhejiang...

Chai Yanfei, secretary of the party committee and editor-in-chief of the Zhejiang Branch of China News Agency, said that history is the best textbook. The unforgettable historical moments in the history of the party in the past century are the epitome of the history of the Communist Party of China in Zhejiang for a hundred years, and are precious to the people of Zhejiang in the past century. Collective memory, the release of "The Moment: Return to the Red Scene in Zhejiang" on the occasion of the centuries of the founding of the party is also the mission of media professionals to show the outside world a true, three-dimensional and comprehensive China.

From the red boat sailing to defending the country, from the establishment of a new China to socialist construction, to getting rid of poverty and becoming prosperous... This special exhibition showcases a century-old journey through art forms such as painting, calligraphy, seal carving, and stone carving.

According to Wang Yifang, a librarian of the Zhejiang Provincial Literature and History Research Museum and a member of the Chinese Writers Association, the special exhibition presents party history from the perspective of the concept of civilized history. It includes works collected by the Zhejiang Literature and History Research Museum and the work of a new generation of artists, both new and old. Co-prosperity is a concentrated demonstration of the extraordinary century-long journey of the Communist Party of China.

In the palace of art, looking back at the historical moments, Hangzhou citizen He Zengqiao used his camera to record unforgettable moments.

"The paintings "Sunrise in the East" and "The Red Boat Set Sail" are all vivid presentations of Zhejiang's "red roots". The spirit of the Red Boat has been passed down for generations. It is necessary to reflect our party's century-long journey through art. At the point of historical events Every bit, we feel that only the Communist Party of China can lead us steady and far-reaching.” He Zengqiao said with emotion.

At the special exhibition site, the cover of 17 versions of the "Communist Manifesto" provided by the former residence of Chen Wangdao in Yiwu, Zhejiang attracted many people to stop and watch and understand the story behind the "sweet taste of truth".

When Chen Wangdao translated the "Communist Manifesto", there was a story of "ink as candy".

This story is related to the five-themed series of colorful ink works created by Liu Yanyong, a professor at Zhejiang Gongshang University and a researcher at the Zhejiang Provincial Museum of Literature and History.

"In my artistic creation, I deeply understand the Chinese Communists’ pursuit of truth and faith, and I fully incorporate the feeling of beauty into the artistic techniques, conveying the'sweet taste' that the revolutionary pioneers exchanged with life and blood, and a good life is still Need to continue to struggle." Liu Yanyong said.

"You see, although there is no one on the screen, these little red flags are'shuttle' among the mountains, which is very wonderful!" Li Tian, ​​a student of the China Academy of Art, noticed when he was watching the exhibition, "It is different from pure art exhibitions, special exhibitions. Showing a very strong sense of history, showing a thriving scene under the leadership of the Communist Party of China, which makes our young people proud."

The librarian of Zhejiang Provincial Museum of Literature and History Fang Zhien used the running script "Five Historical Missions", regular script "Jinglu Fang Zhimin Poems" and other calligraphy works to present the party’s centuries of founding. He said, “Looking back on the hundred-year journey, Zhejiang’s sons and daughters are doing their best and leading the way. , Bravely standing on the tide, creating brilliant achievements one by one, the wonderful Zhejiang story provides us with rich materials for artistic creation, and we will continue to create more artistic works that show the style of the times, and praise this great era. ."

Taking history as a mirror, the cultural and media circles in this special exhibition have joined hands to promote the learning and education of the "Four History" of Party History, New China History, Reform and Opening-up History, and Socialist Development History to reach the masses, the grassroots, and the hearts of the people.

As Yuan Jiajun, secretary of the Zhejiang Provincial Party Committee of the Communist Party of China, pointed out earlier, it is necessary to make full use of the resources of the "red roots" and give full play to the advantages of the "red roots". The party’s history should be well studied and comprehended, and the party’s successful experience should be passed on and carried forward well.

At the special exhibition site, many people took their children to the exhibition hall to appreciate the beauty of art and taste the moments of party history.

Ding Bing, a citizen of Hangzhou, took his 6-year-old son to watch one of the works. Ding Bing said: "Although his son is still young, he can also have his own understanding through artistic language. I hope he can learn from art and art. The history of the party is mingled with the ears and eyes, absorbing the power of growth and advancement."

On the day of the launch, it was the "mang seed" in China's twenty-four solar terms. This is a solar term that is both rewarding and sown. Just like the 100 years of the Communist Party of China, it has been flourishing and prosperous. It always keeps its original heart and remembers its mission, rides the wind and waves, and sails.