Any next war will change the shape of the region.. Al-Sinwar: We used half our strength, proved our ability to deter, and restored American attention to the issue.

The head of the Islamic Resistance Movement (Hamas) in Gaza, Yahya Sinwar, spoke about the goals he said the resistance had achieved during the last war, and about the results, priorities and forms of investment that it would make for the results of this war. 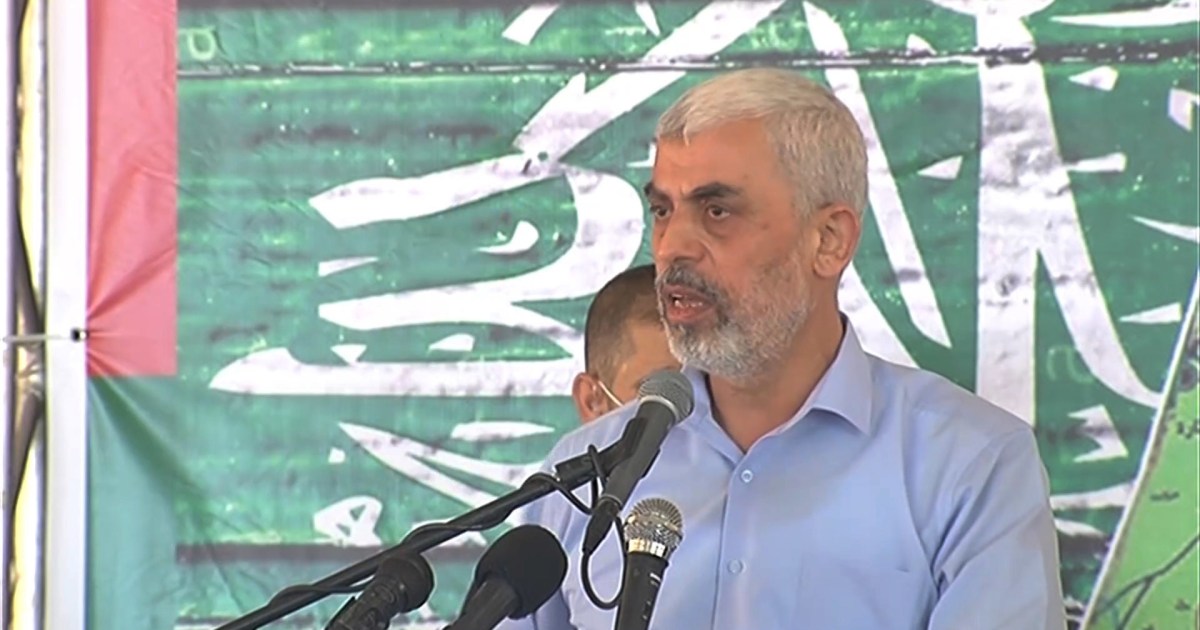 The head of the Islamic Resistance Movement (Hamas) in Gaza, Yahya Sinwar, spoke about the goals he said the resistance had achieved during the last war, and about the results, priorities and forms of investment that it would make for the results of this war.

Al-Sinwar explained - in a new speech he delivered today, Saturday in the Gaza Strip - that the resistance managed during the last battle to achieve a number of strategic goals, the most prominent of which is to prove to the enemy that Al-Aqsa Mosque has someone to protect and defend it, and it is ready to pay all costs for that.

And he indicated that the resistance through the battle thwarted what he described as a "malicious Zionist project" to divide Al-Aqsa Mosque temporally and spatially.

The battle, according to Sinwar, also embodied the unity of the Palestinians and the united nation behind the resistance, while the "intifada" of the people of the West Bank and the interior (Israel) constituted a pressure factor greater than the missiles, he said.

What is hidden from the details of the battle is greater

He also stressed that the resistance thwarted an Israeli plan called "The Winds of the South", to assassinate the leaders of the first row of the movement, to surprise the capabilities of the resistance, to kill more than 10,000 fighters, and to destroy the city of underground tunnels.

He said that despite its siege, it managed what he described as "Marmata" (Ilam) Tel Aviv during the last war, and that what was hidden from the details of the operation was greater than what was known about it.

Sinwar added that Israel failed in its plans to kill the resistance elements and destroy its tunnels, stressing that the Arab rush towards normalization, the Palestinian division and the international situation, are all factors that encouraged Israel's aggression.

Sinwar also indicated that Hamas will not accept anything less than a major breakthrough for the humanitarian situation in Gaza, and that this breakthrough will be felt by all residents of the Strip.

The head of the movement in Gaza explained that Israel was aiming to kill 50% of the resistance, and to turn Gaza back decades, but it achieved a great zero, and said, "No more than 90 individuals were martyred from our resistance from all factions, while Israel's goal was to kill more than 10,000 fighters.

He reiterated that the Israeli enemy did not destroy more than 3% of the tunnels in Gaza, or the so-called "Hamas metro", and that the resistance remained a thousand good.

Sinwar described the recent war with the occupation as a "maneuver", and said, "What happened was a maneuver to test our capabilities and to show Israel a microcosm of what the war might look like," noting that the resistance had previously tried many missiles at sea, and it had to be tested in practice.

He pointed out that the resistance in Gaza used 50% of its military capabilities during the last battle, pointing out that it fired its old missiles.

Sinwar added that if the battle with the occupation returns, the image of the Middle East will change, pointing out that Israel will not bear any real attack on it.

He believed that after the "great victory" that was achieved during the last war, the post May 2021 is not the same as before, and that the last war with the occupation proved to the enemy that Al-Aqsa has someone to protect it, a strategic goal achieved by the Palestinians.

Investing in the results of the war

He stated that investing the various aspects of what he described as victory will be on two levels: interim and strategic.

He explained that the form of investment at the interim level is represented in the presence of a very large opportunity to relieve the residents of Gaza, rebuild and revive economic life.

This level also represents - according to Sinwar - a real opportunity for the unity of the Palestinian people politically and geographically, ending the state of division, and arranging the Palestinian house, through the arrangement of the Liberation Organization.

He stressed that everything that was proposed to rearrange the Palestinian house, before the end of the last battle on May 21, is no longer valid today.

He pointed out that talking about governments and meetings aimed at consuming the stage and burning time is not useful, and will not be acceptable to us.

He considered that the real and immediate national entitlement must be through arranging the Palestinian National Council on the correct bases, to include all the influential forces and factions.

He said that - among the interim goals - there is a real opportunity to mobilize world public opinion, and to explode the popular resistance of the Palestinians in all their places of existence, in a way that forces the occupation to respect international law.

He stressed that achieving this goal would allow either the establishment of a Palestinian state on the 1967 borders with Jerusalem as its capital, or to make the occupation in a state of conflict with the international administration, isolating it and ending its integration in the region and the world.

As for the strategic level, Sinwar summed it up by continuing to build the resistance force, to form a real spearhead, in preparation for the battle of liberation.

He added, we are preparing ourselves and our relationship with all arenas, whether with the Palestinians or Arabs and Muslims, specifically the axis of resistance and Jerusalem, to be partners in the battle of liberation.

The resistance brought the Americans back to the region

In the same context, US Secretary of State Anthony Blinken said - in a tweet on Twitter - that he had held important talks with leaders of Palestinian society in the United States.

Blinken affirmed his country's commitment to rebuilding its relationship with the Palestinian people, adding that Israelis and Palestinians deserve equal measures of security, freedom and dignity.

Blinken also said - in another tweet - that he had similarly good conversations with leaders of the Jewish community in the United States, and that he renewed President Biden's commitment to combating anti-Semitism, amid an alarming rise in incidents, as he put it.

The likely Israeli prime minister, head of the Yamina party, Naftali Bennett, had said that he would not refrain from launching a military operation on Gaza and Lebanon if the need arises.

Bennett's comments came in a television interview with Israel's Channel 12, after signing the government coalition agreement with Yair Lapid, head of the "There is a Future" party, to form a government that they would take turns to head.

On the other hand, an official in the police force in the Gaza Strip said - today, Saturday - that the engineering teams were able to neutralize 1,200 bombs and shells fired by Israel that did not explode during its recent aggression.

In a statement to Anadolu Agency, the head of the Awareness and Guidance Department in Explosives Engineering, Muhammad Miqdad, said that the explosives engineering teams dealt with 1,200 missions to neutralize bombs and shells, which fell in different areas and did not explode.

Miqdad added that the explosives that were dealt with and neutralized varied between artillery shells, smoke, guided missiles, bombs, and others.

He continued, "The number of missions that we dealt with, compared to the number of days, is not simple and very large, noting that if those bombs had exploded on time in the areas in which they fell, they would have caused massacres among the population."

He stated that the explosives teams' crews are working in light of a lack of capabilities, and with very few and simple equipment.

And he indicated that the Israeli side prevents the entry of equipment for neutralizing explosives, including protective suits, helmets, and examination devices, and pointed out that the lack of such equipment reduces the protection ratio available to engineering crews, causing casualties among their ranks.

He called on international committees and institutions - such as the International Committee of the Red Cross - to monitor the work of explosive engineering teams in the field, and provide them with the necessary equipment.

In the Khan Yunis area in the southern Gaza Strip, explosive engineering teams work to collect and neutralize unexploded ordnance.

In the same context, Egyptian engineering teams, with the support of heavy machinery and equipment that arrived from Cairo yesterday, Friday, continue their work for the second day, by participating in removing the rubble of buildings destroyed by the Israeli army during its recent aggression on the Gaza Strip.

On Al-Thawra Street in the center of Gaza City, the engineering teams began removing and removing the rubble of the Palestinian Ministry of Labor building, which had been destroyed by warplanes on May 16.

Some of those crews also moved to the Rimal neighborhood (west of the city), to remove the rubble of the 13-storey Al-Shorouk Tower, which was destroyed by warplanes on May 12.

These teams are scheduled to continue their work alongside the Palestinian workers in removing the rubble of destroyed buildings and homes, in preparation for the reconstruction process.

According to the Ministry of Public Works and Housing, the total volume of rubble for destroyed buildings in Gaza ranges between 200,000 and 300,000 tons.

On April 13, the situation in Palestine erupted as a result of brutal Israeli attacks on the occupied city of Jerusalem, and the escalation spread to the West Bank and Arab areas inside Israel, then turned into a military confrontation in Gaza that lasted 11 days and ended with a ceasefire at the dawn of last May 21.

In total, the Israeli aggression resulted in the death of 290 martyrs, including 69 children, 40 women and 17 elderly people, and more than 8900 injured, in contrast to the killing of 13 Israelis and the wounding of hundreds of factions in Gaza reacting by firing missiles at Israel.