Nigeria. Over 100 children kidnapped from the Koranic school

Immediately released the little ones who were unable to walk. A ransom request is awaited. / 00 the boys kidnapped since last December 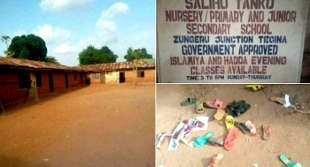 May 31, 2021 A large number of schoolchildren were kidnapped in Nigeria along with some bus passengers by a group of gunmen. The kidnapping took place in the Salihu Tanko Islamic school in Tegina, a town in the state of Niger less than two hundred kilometers northwest of the capital Abuja. Local authorities believe it is likely that a cash ransom will be required for the children's release. Mass kidnappings for extortion purposes are on the rise in north-central Nigeria.

The school was registering around 200 children for entry at the time of the attack by a group of gunmen, but many managed to escape, said a head teacher who wishes to remain anonymous for his safety. "At first they took more than a hundred students, but then they let go of those they considered too small to walk, between the ages of 4 and 12," said the manager, adding that he did not have precise figures on the number of children kidnapped.

This new kidnapping comes the day after the release of 14 students in the state of Kaduna, after 40 days of detention. Five students were murdered by their captors in the days following the kidnapping to put pressure on families and force the government to pay the ransom. In the local press, the families declared that they had to pay a total of 180 million Naira (357,000 euros) to find their children. For several months, groups of bandits have been involved in mass kidnappings targeting schools: since December 2020, 730 children and adolescents have been kidnapped.